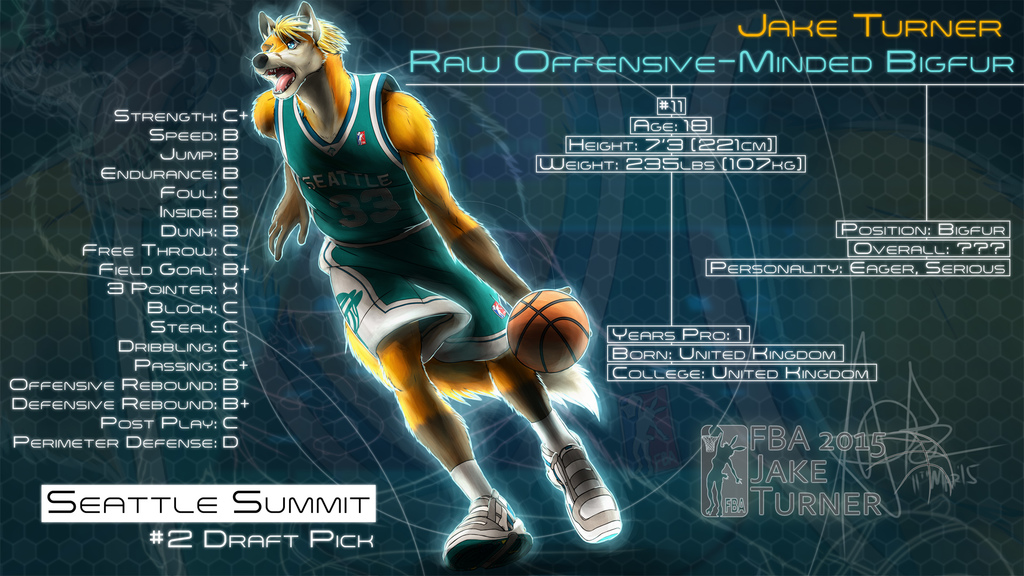 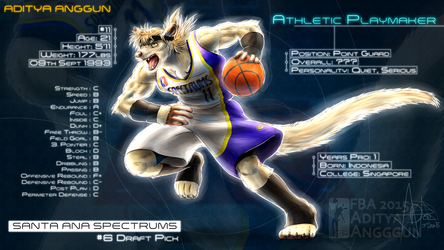 Jake Turner is one of the most highly rated draft prospects of the 2014 FBA Draft pool, and is also the son of FBA legend Vicki Turner.

Being the youngest of all the draft pool (age 18), and being the son of an FBA legend and late Iraq War hero, Jake felt that there was a lot he had to shoulder, and works hard to be the best that he can be. His weakness however, is his state of emotion at any given time (he can be quite negative, and also very hotheaded and impulsive), so if opponents can get into his head, he'll not be able to perform to the best of his abilities.

An example of the above is against Santa Ana Spectrums starting Point Guard Victor Vos, given Jake's distaste of Vos' lifestyle choice, and nothing more. Just because of that, Jake's own natural rhythm would get disturbed, and he'd perform less than what he can against games where Vos shares the court with him.

Jake has the makings of a future FBA legend, his skills of driving into the paint already being very strong, displaying high levels of athleticism and speed, coupled with his tall (but lanky and light) frame, making him one of the fastest players in the league in the #4 or #5 spot. He's also got a very decent midrange jumpshot as well, and is one of the harder players to guard owing to both his height and jumping ability.

However, given his build, he lacks strength for his size, placing him at a disadvantage when it comes to tussling with most other Bigs playing the #4 or 5 spot, even those smaller (but better built) than himself. His defense also leaves something to be desired, perhaps born of his offensive orientation - a tunnel vision to attacking the rim, and a lack of perimeter defense means that smaller, more agile players than himself are capable of driving past his, and those with agile hands are able to swipe the ball out of his paws if he holds onto the ball for too long - A fact backed up by the fact that Jake here is tied for the 4th highest turnovers per game in the entire season as of writing this.

That said, his debut game with the Seattle Summit saw him as a starter, and he earned a Double-Double in said game, playing an instrumental role in helping the Summit come ahead of the Plymouth Taproots with a 3 point victory.

Jake has a lot of raw potential, so if he can maintain his speed while gaining some bulk, and also improve on his court awareness and defense, there's little doubt that he can become on of the best players the FBA has seen.

Outside of his own team, the Seattle Summit, he's friends to both Bigfur Benjamin Durby, and since the FBA Draft Combine of 2014, to the Indonesian civet, Point Guard Aditya Anggun as well, due to the civet's military background, and his respect towards his own late father, a military hero.