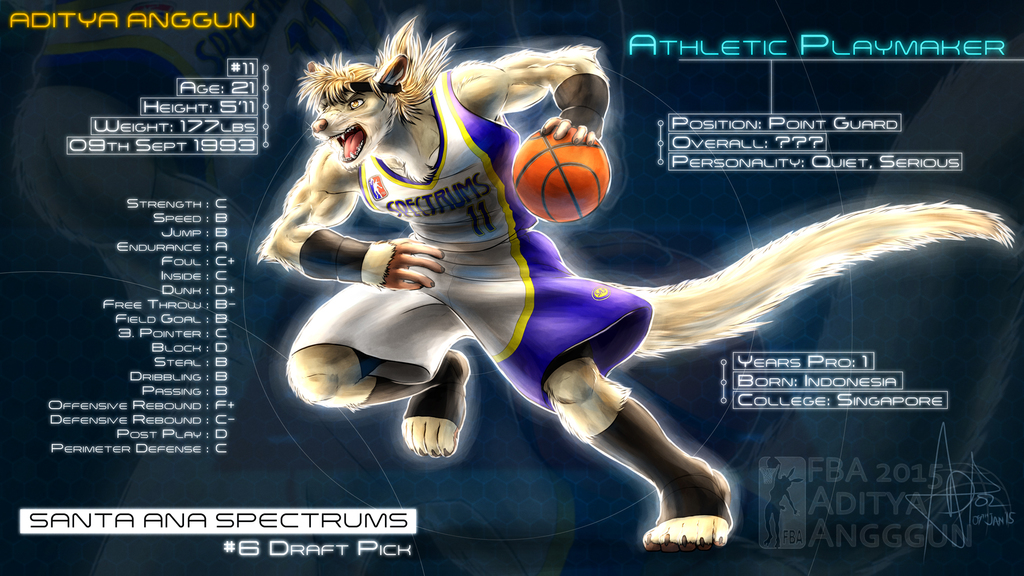 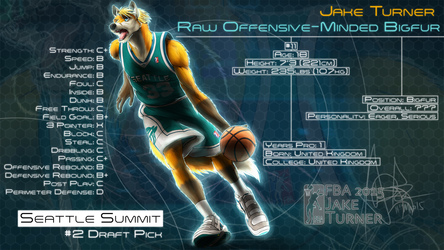 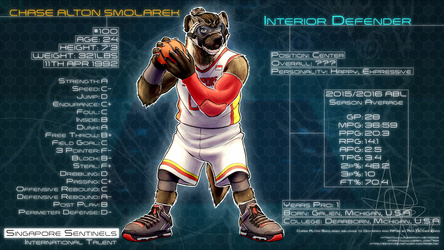 First pic for the year 2015, decided to try to emulate something NBA 2K15-ish for my FBA character Aditya Anggun

Decided that it'd be good practice too, considering that I haven't done anything related to full colour for almost a month or so - Was quite rusty to say the least.

Anyways, Adi has been doing relatively decently since the start of the season. There's been ups and downs, a couple of Double-Doubles, and a PotG as well (31 games in so far, as of me writing this), and he still has a lot of room for improvement, considering he's lacking in several key important aspects, given where the more than outstanding all-round players are (considering the many players holding the Shooting Guard and Forward positions out there), but that's very good story material :3

In general, what Adi does is primarily getting the ball where it needs to be, and he's not a strong scorer (picky shooter, which means that he doesn't take chances with his shots unless he's absolutely certain it will not be interrupted in any way, shape or form - aka an 'Open Look'), and given his short height in relation to virtually everyone else (He's under 6' in a league where the average height is well beyond his own), and while he has good weight for his height (177lbs +- 5%, water/food flux, I plan to have him shave off 10-14lbs off his mean weight in the coming future, perhaps over the year or two, to up his Speed rating), his weight pales in comparison to most of all the players in the league (given their height/weight ratio).

These previous points combined mean that rebounds are not his strong suit (not that he can't) even though he's a decent jumper (my envisioned vertical for him is pretty high, about 36.0" standing) - He's just simply out-muscled by virtually everyone, save for players in a similar height/weight class and those smaller than him when it comes to rebounds within the paint. His lack of height also means that it's more of a challenge for him to block shots too. That said, this is good story material, maybe something in the coming future will enable him to improve with his rebounds and blocks? I don't know, not yet anyway. Overall, Adi is not a strong contender to get a Triple-Double, and he's unlikely to get one for a long time, if not ever. Double-Doubles though, is within his reach if his scoring and passing abilities are further refined over time, but scoring isn't what I want to focus with him.

Adi tends to stay on the perimeter (around the 3 point line) to keep an eye on everything, and if he does drive into the paint (the rectangular area under the rim/net/hoop), it'll be for a confirmed layup/shot, or one that he can draw a foul from (Either 2 free throws, or to Convert-and-One, which means to score and get one free throw).

Given his history and background in martial arts, he's pretty quick with his hands, which when combined with his spatial awareness (Military sniper + thief gang co-ordination while he was much younger), helps the team with stealing the ball off of the opposing team when he gets the chance to. He had 4 steals against the Texas Lone Stars, led by the legendary Buck Hopper, outstripping the legend and leading the Santa Ana Spectrums to it's victory during his debut as a starter.

At this point, Tazel, who acts as the iRL Head Coach for the Spectrums, hopes to see more scoring oomph from Adi, but personally, I'm hoping to have him grow towards a 'Pure' Point Guard route, focusing on his overall Athleticism, Passing and Stealing abilities, as well as working on his Perimeter Defense, which works in conjunction with his Stealing abilities, while perhaps working on either his Post Play and Inside Scoring abilities (Moving/Standing Jumpshots, Layups) or his Outside Scoring (Moving/Standing 3 Pt. shots), preferably not both until much much later, since it is possible to try and overpower a character but lead them to lack focus early on.

I personally hope to graduate Adi from his 'Athletic Playmaker' moniker to 'Crafty Athletic Playmaker' in the future. iRL parallels (NBA Players) I hope to steer Adi towards in the coming future, are John Stockton and Steve Nash.

Overall, Adi's strengths into the season thus far are ball movement, strips and fast breaks, and at present, he has the highest Offense rating in the whole league, and is a strong contender for player effectiveness in terms of Assists and Steals per minute, with 0.367 Assists in a minute (2 points off of team mates), #5 in the league ATM, and 0.065 Steals per minute, standing at #12 in the league in Stealing effectiveness, out of 480 players across 24 teams.

With the All-Star Week coming soon in the FBAverse, I have some pretty major plans for Adi as well, and there's much to look forward to in this coming large FBAverse event, which the players from many teams coming together into one place :3
Friendships, rivalries, enemies, frenemies etc., it's huge story fodder everyone will be feeding off of :D

Aditya Anggun belongs to me
FBA started off by Buckhopper, now spearheaded by Steviemaxwell