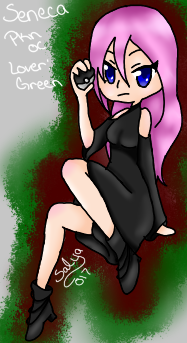 Status: Dating Green (She was made for the manga one.)
Likes: Being alone, watching her pokemon play, walking around and annoying Green.
Dislikes: being hurt, Charizard being overprotect, being told what to do and getting her pokemon mixed up with Green's.
Seme/(dom) Uke/(sub): depends
Story: Seneca was born in Pallet town and grow up part way up with Red and Green. She wasn't really allowed outside since her bone were so weak and broke easily if she fall. Soon after Red and Green left town to become trainers, she become loney. She didn't really get make friends since she didn't like anyone other then her two best friends.
Well on her 16th birthday, Pr. Oak gave her a poke'ball with her first poke'mon in it. He told her that Green talked him and her mother into letting her too become a trainer but she had to be careful. Well that night, while thinking about leaving, she let the pokemon out of the black pokeball* to see what is was. It was a Charmander. At first she didn't really know how to take it but she soon hugged onto her first pokemon. She liked this fire pokemon ever since Green showed her his. And now she got her own.
So the following morning, she got everything that she needed and even some things if she happened to break something. She kissed her mother goodbye, petted her mother's Ninetails then left with Charmander following closely behind her.
On her first week out, she somehow broke her left arm but got three new pokemon. A Rattata, Pidgey and Caterpie. She was a bit happy until she talked to Green at Pewter City's Poke Center. He told her to keep the four pokemon she had and he would get her some that he had two of. He also told her to stop doing things to hurt herself after he saw her arm being warpped up. She didn't really listen though. Red was warpping her arm, making her finich and Charmander glare.
After leveling her four pokemon up, she went and battled Brook. She won and fall over a rock, lightly hurting her right leg. So Brook took her to the poke center himself and told her to rest until that healed. Which she did.

((I'm stoping there. Because I don't really want to post her WHOLE history from start to finich since I'm still working on things with her and Green. Like when did they start dating and such. So any ideas would be helpful. ))

Game/show: Pokemon- Manga or Game like. No Anime pokemon. Since I really hate Ash. >_> Also She can only be paired up with Green... but I like to do sexual rps with her paired up with Red. Don't ask.