Dahlia of the Mist by FeyPhoenix 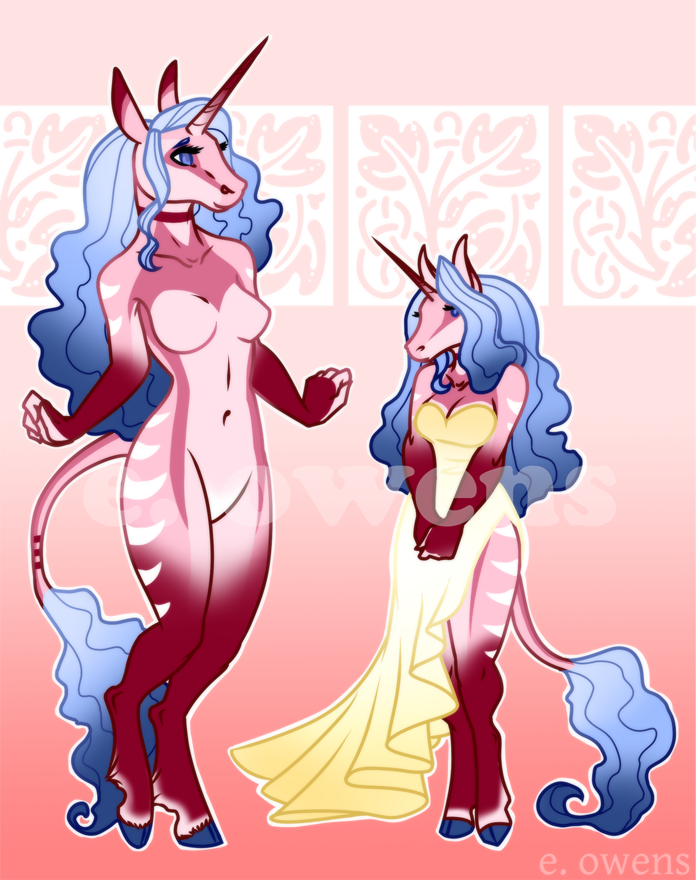 Dahlia of the Mist

Attention to detail gets you everywhere with me! <3

Vision lost and forced to wander,
Foregoing thought, no time to ponder.
Calling out, there is no sound,
You've lost your way, it can't be found.
When hope is dim, but you still persist.
Seek her guidance, Dahlia of the Mist.

Dahlia of the Mist was a title bestowed upon her when she was summoned to the world. Mythicals on Esoteria are exceptionally rare and often exist without people realizing it. Dahlia is a slight exception. While she still doesn't reveal herself openly to all, she does (somewhat) disguise herself to roam among mortals. Unlike mortal 'mythicals' that are really just rare genetic abnormalities of normal creatures (such as the snake-kin hydra) Dahlia is a true mythical, having been brought forth from the energies of the lands.

She can travel along ley lines instantly, like teleporting, and is drawn toward those who have lost their way. This mostly refers to physically lost, like among woods or other natural areas and in fogs or blizzards, but she also gets pulled to those who have lost their direction with art, soul, mind, and heart, like a muse. Her most active hours for her official tasks are during precipitation and fog at twilight hours and nighttime. When she is not active, since she does not need sleep, she wanders among mortals. She typically stays out of crowded cities and highly populated areas, since she is both shy and draws attention with her unusual looks. Even with her horn and glow hidden, her unusual colors and shining blue mane, tail, hooves, and eyes make her quite a sight to behold.

She befriended some local witches, since they are easier for her to communicate with due to their ability to understand what she is, and visits them most of the time. Before she passed, Penelope's aunt June (and her familiar, the Western Night Wind, Holocor) was her best friend. After she passed and Holocor returned to the ether, Dahlia spent some time secluded from civilization, aside from guiding the lost. She eventually felt so lonely that she craved a new companion, and introduced herself to Penelope. Not before having a one on one conversation with the Grand High Empress, Lady Adrasteia, however. Dahlia was actually heading to the shop to pay her respects when she came upon the familiar seeking herbs to gather for the shop. Adrasteia immediately recognized her from stories told by Holocor, not to mention her aura, and flew to her. Adrasteia expressed her distaste for Dahlia taking so long to come and introduce herself, as if the familiar were too important to be kept waiting, and Dahlia apologized in a mocking tone, which Adrasteia chose to ignore. She, Adrasteia, and Penelope got along well. Dahlia was a bit nervous around Penelope at first, since she was quite a bit larger than June, but her natural openness toward the mythical made that nervousness melt away in short order.

From that point, Penelope helped her make a few other friends and even convinced her to join her on social trips to the city of Melodia. Dahlia was shy, but she actually found herself enjoying being around people. As long as she wasn't the center of attention, she didn't mind being on a busy street with lots of people shuffling along to get where they are going. Occasionally, she would see someone that looked a bit lost and, though it might not have been official duty, she would help them find their way. Whether directionally, or with regards to soul searching.

The crowds offer her a bit of protection as well, since she may need to leave the moment duty calls. Or if she has somehow drawn unwanted attention or been confronted or accosted by someone with true sight, she can slip between people and disappear. Literally, in her case. It's rather simple for her to slip between people and gently glide into the ley lines. To observers, it would be as if she suddenly disappeared beyond their peripheral. But most people would be too busy minding their own business to notice her disappear.

Her ability to translocate also comes with the ability to physically shift her body. She does not technically have a physical sex, because she is a spirit, but she knows how they function and can give herself a body more akin to males, females, and otherkin. She can also shift between a feral and anthropomorphic form, allowing her to carry her charge, should the need arise. She generally stays in a feminine anthropomorphic form, however.

Dahlia is currently preparing for events to come, which will involve many of the people of Esoteria. Her duty will become very important for the continued existence of such a vast and diverse planet, but she fears the impact it will have on the sentient life.