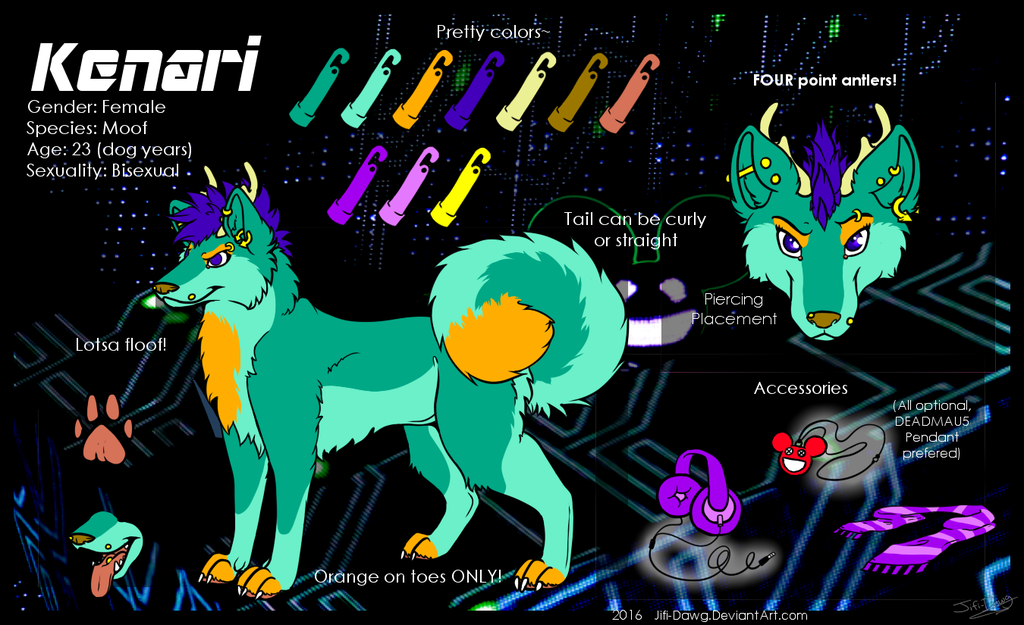 My mascot and most precious character <3

Personality: Calling her a good person would be a bit of a long shot, but she's not all that bad. She's more a neutral party that assumes the role of anti-villain or anti-hero when need be. She's very strong willed, and sometimes it gets her in big trouble. Even though she acts like a hard, emotionless person on the outside, she's actually very troubled, but if you point it out she instantly becomes aggressive. That's not to say she can't be soft. She won't admit it, but she really enjoys affection and intimacy, namely from her mate, Alexander. Her family is her pride and joy, and if they're threatened she will become a fierce protector.

-Her tail is USUALLY curled, but on occasion can be more like a regular wolf tail.
-In anthro form, she works at a night club as a DJ, doing what she loves to provide for her family.
-Her base design has stayed pretty much the same since the beginning. I based a lot of her on my love of Dubstep.
-Although her father has some telekinetic power, she didn't inherit any of it.
-However, because Chromosa used her power to save Kenari's life as a fetus, Kenari has the ability to learn how to change forms and become a different species entirely. So far she's only mastered an owl and a rat form, and is learning an iguana form.
-Different Forms:
-Moof (main)
-Raptor Dog
-Chama
-Fancy Rat
-Barn Owl
-Raccoon
-Iguana
-During a fight in anthro form, she prefers long ranged weapons like throwing knives(or throwing discs, one of her specialties). In close combat she would double wield daggers.
-She's as big as she is because of the moose genes she inherited from her mother.
-Like her father, she actually has a slender athletic build, but she has so much fur that it makes her look a lot pudgier.