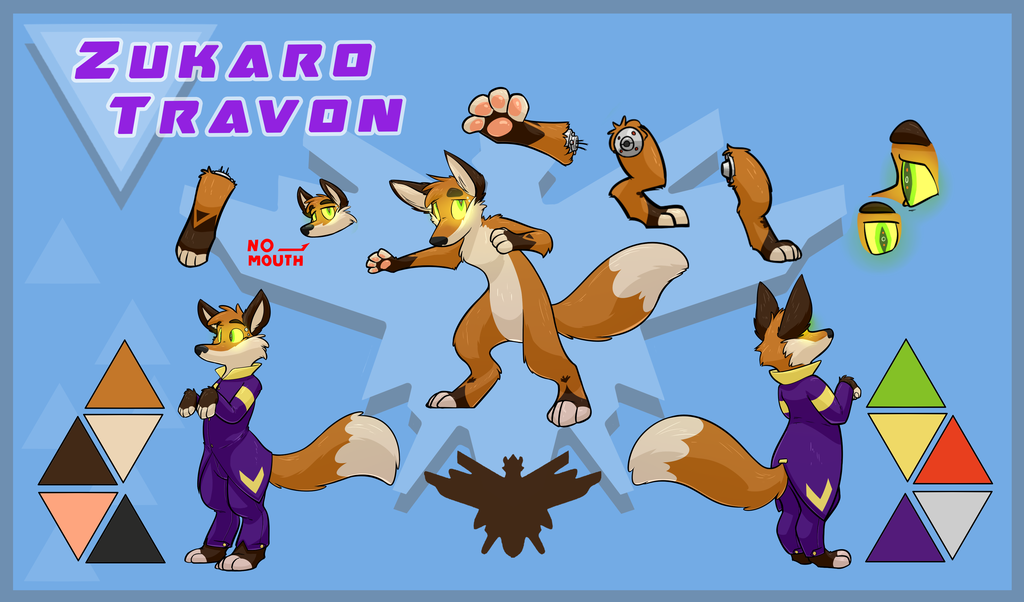 Zukaro is a wax robot fox. Its made of a special type of wax (sometimes referred to as “mimic wax”) which is capable of taking on the physical properties of most elements (excluding their melting point). Despite being capable of mimicking the properties of other elements, Zukaro has a waxy shine when in its proper form (however, Zukaro can eliminate the shine if it wishes; but under most circumstances it keeps the shine).

The melting point of mimic wax is 54.85°C. At 46.85°C the wax is no longer able to mimic the properties of other elements and so becomes waxy. At 50.85°C the wax will begin to soften and get fairly sticky, as well as begin to smell like popcorn.

Zukaro still has all the same internal components a first generation robot fox would have, with the difference being they're made of wax (the wax mimics the properties of the first generation parts however). This means that if Zukaro's circuitry is destroyed it will no longer function. When Zukaro's head fully melts this is the point Zukaro can no longer function, as this is the location of its CPU.

The reason Zukaro is able to continue to function while the wax is unable to mimic the properties of other elements is because the wax is still able to hold onto a few properties even when at 46.85°C and above.

Specifically the properties the wax keeps are its conductivity (whether it conducts, semi-conducts, or insulates), its level of opaqueness (transparent, translucent, or opaque parts continue to allow the same amount of light to pass through them), and its colour.

This means that while at these temperatures Zukaro's circuitry will continue to work despite becoming waxy (until it heats up enough that the circuitry melts and connections can no longer be made).

After cooling below 54.85°C Zukaro will begin to reform (the wax essentially crystallizes into Zukaro). It will still be soft and sticky until 50.85°C, and waxy until 46.85°C, but Zukaro will be able to function at this point. After cooling below 46.85°C the wax will take on its original properties. Zukaro has no control over when it reforms after melting (so if cooled to below 54.85°C Zukaro will begin to reform immediatly). In the event Zukaro reforms around an object it can liquid shape shift off that object if it wishes. It will continue to smell like popcorn until washed.

Zukaro will be very sticky when melting. However, if Zukaro is heated to a higher temperature it will melt like regular wax (so for example, if Zukaro was in a fire its consistency would be that of regular wax in that situation). Zukaro melts this way at about 5 degrees hotter than its melting point.

If heated to 370.85°C Zukaro will evaporate. This will make the room smell far more of popcorn than if Zukaro just melts. The same rules as melting apply (when Zukaro cools below its evaporation point it will become a liquid again, and then after cooling below its melting point it will reform). This could potentially be quite dangerous if you were to inhale the vaporized wax (outside of the first issue of not only having wax in your lungs, but having a vapour which is 370.85°C or hotter in your lungs).

The only thing which could truly destroy Zukaro would be to dissolve it. Due to being made of wax Zukaro will dissolve in anything that can dissolve other waxes, such as isopropyl alcohol. However, in the event this happens it would be possible to restore Zukaro from a backup to a replacement body (Zukaro makes daily backups to its backup server). It should be noted that mimic wax will dissolve in isopropyl alcohol even when mimicking the properties of other elements.

In the event Zukaro restores from a backup it will “forget” everything which occurred after the backup (as that data would not be included in the backup). Zukaro has an 8P8C (Ethernet) port on the back of its neck (where the head meets the neck). This port is used for charging and backups. However, Zukaro is also able to charge wirelessly, as well as transmit data through NFC (Zukaro can read and write NFC with its nose, which will beep when it successfully reads an NFC tag). This can be used as an alternate means of backing up if needed. Zukaro doesn't have any long range means of wireless connectivity (such as wifi or 3G, etc), but due to being a liquid shape shifter can add this functionality when required.

Zukaro can liquid shape shift into any object it wants. It can even create machinery by shape shifting, but in order to do so it needs to either understand how to build such a machine, or have the blueprints handy. When shape shifting its circuitry is maintained, as without it Zukaro cannot function. However, this doesn't mean its circuitry must remain solid while shape shifting; the circuitry can be just as fluid as the rest of Zukaro's body and continue to function.

Zukaro is extremely self conscious about the fact its made of wax and tends to keep this a secret from everyone. This generally isn't an issue however, as conditions generally don't get hot enough that it would matter, and in the event it does, Zukaro often knows ahead of time so can prepare for it.

Despite how shy Zukaro is about being made of wax, it secretly loves it when people mention this fact (in some way or another); but only if this fact is not mentioned in a negative way.