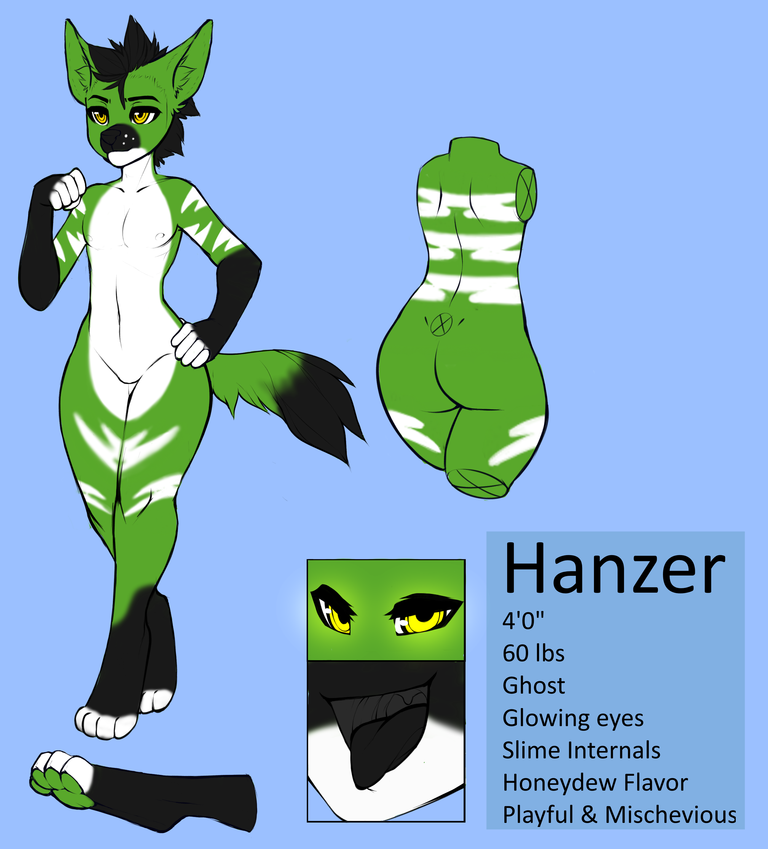 Once a young explorer and scholar in a victorian era steampunk universe, he has long since died via alchemy experiment gone wrong!

Unfortunately, his prior memories were lost, and even after death, he has none. However, he has learned to control his new body, which primarily consists of black slime with a green translucent secondary slime that he uses as 'bodily fluids' such as saliva. He is still flesh and bone , minus the muscles and internal organs, all now mimicked by the black slime inside of him, giving him the feel , brain activity, sensories, and even body temperature of a normal creature.

He resides in a purgatory like dimension known as "The Doldrums", which appears much like a wonderland of glowing mushrooms and other flora,, pine trees , and endless swamps and bogs. Despite this, he himself has a sweet honeydew scent, which may be a thankful notion for those unhappy with the acidic smell of bog and demons. He has discovered a way to portal thrugh to other dimensions and visit mortal realms, and some immortal realms (if the residents allow him to stay), and at first is ethereal, but may materialize into a physical form if he builds up the energy. If so, he remains there until 'Death', which just sends him back to the Doldrums to be scolded by the lording demon of that realm. Never fun!

He is a mischievous and playful sort, although shy, and never misses the chance to be inquisitive and nosy. Often times he is mistaken for a child due to his size, and this is also probably due to his playful nature, he will often play hide and seek with young mortals , and perhaps even attempt to with adults if they aren't treating him as an adult.

His clothing consists of three articles; the first being a pair of brown spatz on his footpaws going to his mid-shins. The second being a trenchcoat of black, and the final being a tophat with a face!

Yes, his tophat talks and is an actual other spirit. It is a demon he came across after death, and often acts as the 'devil' on his shoulder, convincing him that a bad deed might be helpful or fun. Fortunately it rarely talks in the mortal realm and just seems to be a normal brown tophat with a hatter's card.