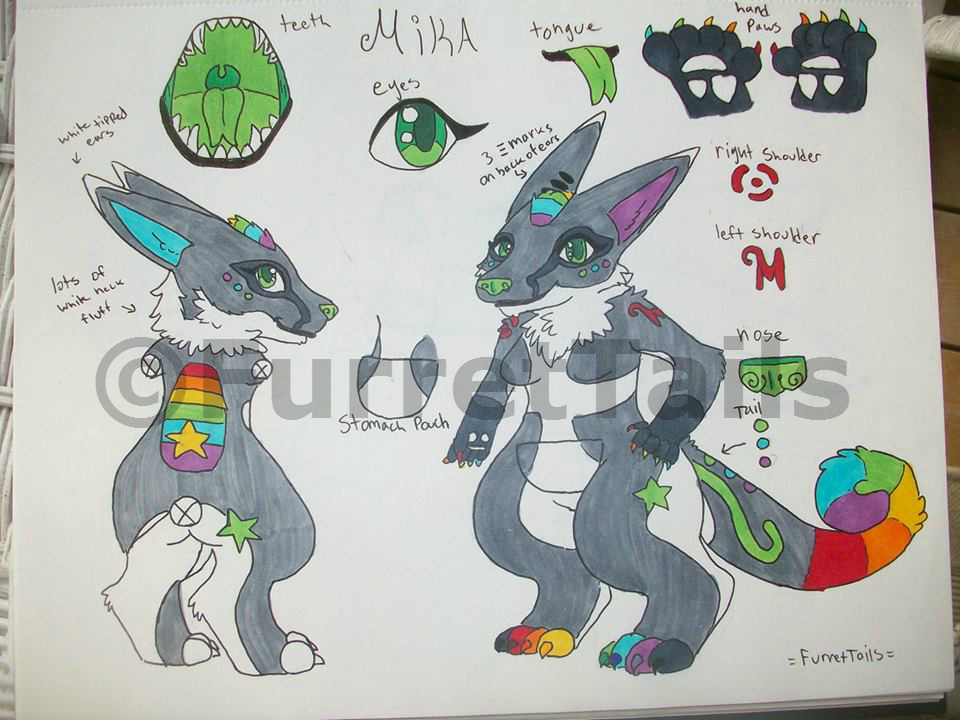 will have edits as her character sheet and background is a WIP
Motto: Dreams are the touchstones of our character.

Personality: Mika is a mostly laid back creature but loves to entertain. While she is generally laid back there are times where she can have an attitude problem and come off as being snarky or feisty. This tends to happen if shes feeling agitated or just in a downright GTFO of my way mood. Despite this she still loves to try to make others smile and laugh and can be very playful when she wants to be. She loves to investigate new things and she loves to nibble on things with her jaw or touch them with her paws to see what they are. Mika enjoys howling on blue moonlit nights and speaks in chitters, barks, chirrups, squeaks and other sounds. Her favorite foods are anything that is sweet or savory, but she also loves to eat pumpkin and apples. Some of her favorite friends to tease or pal around with are Mystic (©MysticSabreonic), Biscuit (©BiscuitPup), and Raver (©RaverRabbit). She loves to go on adventures and see new places. She can be seen in ______ helping out Tora or Wisteria in the Gardens. Sometimes she will go out to find Garnet and go scavenging for shiny gems as well in the Longway mountains. There are times where she will go out with Katana and Hex to help guide the dead to those who judge their souls so they may pass on. Sometimes she will even go off on her own to observe others dreams or to look into the future. By a bound contract she is not allowed to speak to anyone but Hex about what she sees while in mediation, and since her ability to see into the future is still in training she tends to come back with hardly remembering anything or nothing at all of what she's just seen. She is sometimes able to get premonitions through emotions from time to time which can leave her in a sudden mood swing. If she notices anyone having a bad dream she will consume the dream despite the after-affect it may have on her. Before she had training in dream traveling she was very careless when she traveled around; because of this she was once attacked by a very large Black Smoke demon. While she managed to win fighting against it her white hand paws were left a permanent smokey black from the scuffle, it always reminds Mika to be careful when traveling in a realm that is not of her own. One of Mika's favorite tricks is being able to glow, a newly found power she has realized she has. On her 21st birthday she gained her full fur coat, white tipped ears, and her first initial on her shoulder. Mika is able to capture prey by attracting them with her huge curled tail and then eating them whole; (if they are small enough.) while at night she will attract her prey by glowing. When she fishes she will use her glowing claws to attract fish, and when they are close enough, she will snap them right up in her mouth.