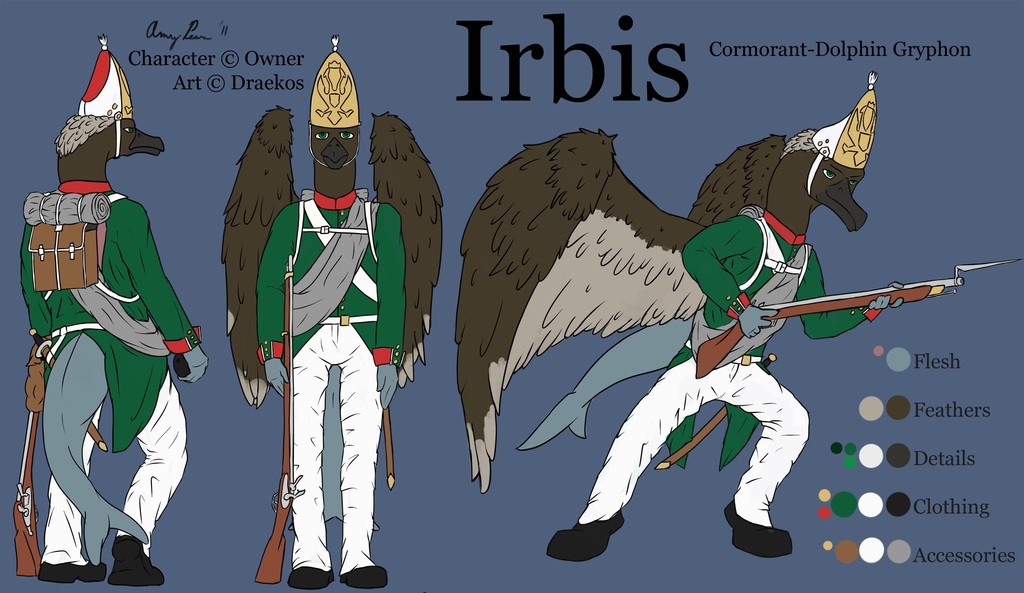 English: Fredrick Liskavich Irbisgreif von Einfox, Emperor of the Black Forest Clan's Empire (Emperor Irbisgreif I)
Standing before you is the Proud Emperor of the Schwartzwaldklansreich. How he ended up here is anyone's guess, but that doesn't stop him from cutting an imposing figure. He (Sometimes shi, if you ever see her undressed, which is unlikely.) is a mix of a Cormorant and a Dolphin. The legs, wings, and head are that of a cormorant, covered in deep brown feathers and sporting a long, sharp beak. The body and tail are that of a dolphin, though without a dorsal fin. The arms look vaguely delphine, though normal dolphins don't have them.
But, if that was not strange enough, this imperial 'gryphphin' is wearing a ceremonial uniform and carrying a straight infantry sabre and a Brown Bess musket. His marching boots have black soles and a white, gleamingly polished leather body. His woolen pants are bleached white as if handled by a master fuller. His white belt holds his sabre's black leather scabbard. His cotton shirt is a deep crimson colour, his jacket is a deep green. He has six pairs of gold buttons on his chest, and his jacket cuffs have three. If closely inspected, each button has an image on it of a flaming grenade. Over his jacket are white leather cross straps supporting his Dark brown leather knapsack, backpack, and grenade pouch. He keeps a Great Coat for winter wear worn as a sash across his shoulder. Finally, his head is crowned by a grenadier's mitre cap with a crimson red bag, white base, tuft, lace, and rear plate, and a gold front plate with the imperial sign, the Double Eagle on it.
Yes, this is a gryphon-dolphin dressed as a Pavlovskij Grenadier.
Alternate Timelines/Places:
Sometimes a peregrine instead of a cormorant. Also known by the names: Irb, Irbis, Irbi, Irbisgreif, Fred, Fried, Ein.
When set back in classical times: Gaius Cornelius Gaii filius Vulpis nepos tribu Cornelia Grypus Impudicus, domo Thebae (C. Cornelius Grypus Impudicus) a Patrician farmer.
Modern Day: Gerlach Irbisgreif, mathemagician
(I can't seem to use a collection to create this profile.)