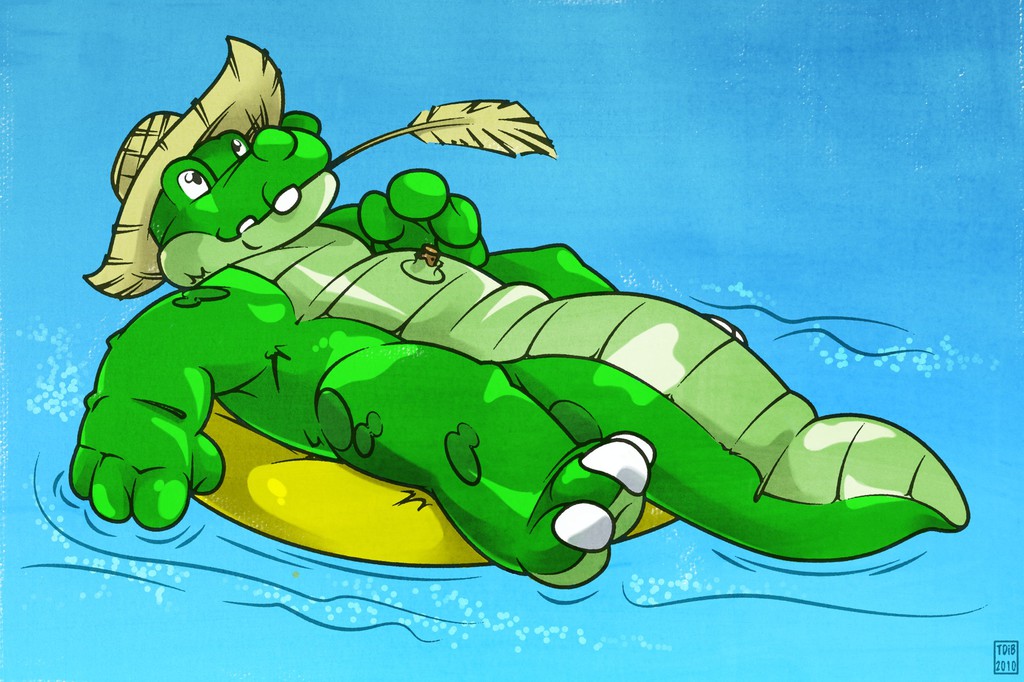 Toupatou is a creation from deep within the bayou, and his somewhat gravelly, semi-Cajun accent is just one of many proofs of this. His existence came about after existing for some time as a rather large regular alligator, living in a swamp inhabited by "the voodoo lady", as he refers to her.

One day, when she was out in her inflatable raft, Toupatou was swimming nearby, and thought it looked like food, so he took a huge bite out of the side of the rubber raft, puncturing it and getting a mouthful of rubber in the process! Angered by the gator's sudden 'attack', the woman cursed him to "bite no more", perhaps intending death.

But of course, voodoo magic works in strange ways, and a few days later, this fellah was knocking at the door to her hut to apologize for damaging her raft. She was amazed at the outcome, but the rubber of the raft had blended with her curse, and he certainly couldn't bite anything or anyone anymore with those inflated rubber teeth!

Taking pity on the gator's new outcome, but thankful he seemed far more durable than her boat had been, she made him the straw hat he wears everywhere, which stays on his head fairly well, and strangely seems bound to his own size, scaling up with him whenever he gets larger! He stayed with the woman for a while longer, before finally setting out on his own after learning more of language, and finding himself in his new personality as a self-aware and air-filled creature.

Toupatou is exceptionally welcoming to new people, the Cajun gaytor always having a warm smile for anyone, and a bit of that Southern hospitality too, frequently offering himself up as a float for folks at a pool or the river, the latter being his favorite.

The cork in his belly is the only valve-styled input he has, with nothing at his tail's tip like Ceralor has. This cork also behaves rather strangely, seemingly linked to intent. If someone with malicious intent attempts to pull the cork they'll have a fairly difficult time, whereas someone with a warmer intent will find very little difficulty. Additionally, his hide makes rather cartoonish rubber-stretch noises when inflated or the cork and stem are tugged on, which he seems fairly enamored with.

Just like my other characters, his hide is impervious to puncture or stretch abuse. Whilst lacking clone magic that Ceralor has, most of the folks he does transform also will end up a gator like him, but with their own signature attributes, such as hair, or eye color, or overall coloration differences.

So far he's quite enjoyed his change, actually thanking the voodoo lady in the end for her change for him, extending his lifespan indefinitely and negating the need for hunting for food, though he does still fish on occasion for fun and for a snack, often just cooking for friends instead though.