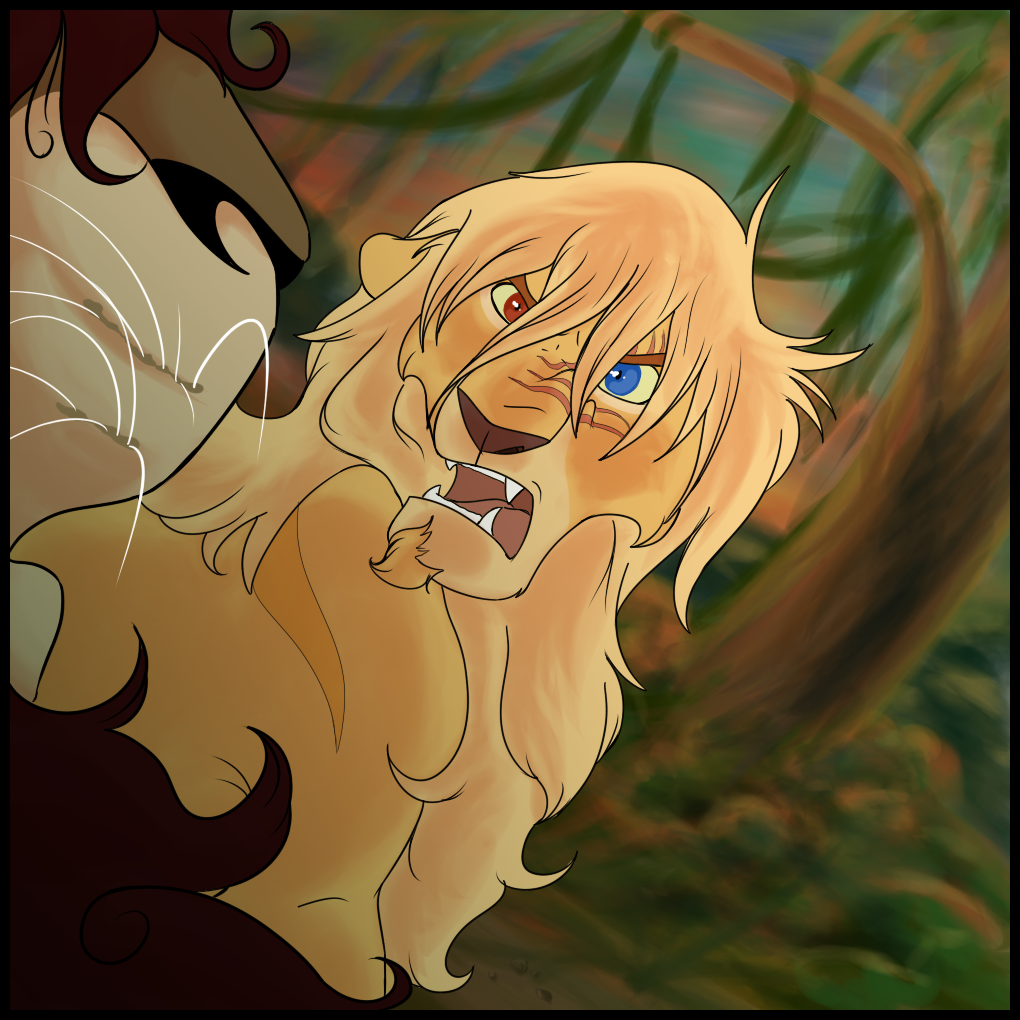 Viza is an OC I am very fond of. He made humble beginnings in a Lion King RP on deviantArt titled United Prides, was the son of the West Land Queen Adilah and commoner Busara, full brother to only Elak and half brother to Kimi, Zola, Murdoc, Godric, Talia and Kida. He was a very grumpy cub, misunderstood for a devil child when all he sought was attention and love. Often Viza was avoided by the other cubs for being very bratty and self-entitled, though he had never been reprimanded for his actions and thus had to figure out right from wrong by himself (which was a hard task to do in a pride considered to be 'evil').

The prince gained one friend in his early cubhood, the half sister to Kimi (not to his knowledge; he still does not know that the two are related and likely never will. Keto, the father, never told Kimi. Kimi was led to believe her father was Sitka, the East Land King, due to resemblance and stories told to her by her mother to instigate war between the prides) though after getting in verbal and physical fights with Adanna's sister, Akilah, Adanna and Viza refrained from speaking.

Viza was raised by his mother's adviser, Merah, mostly when he was not off on his own. Due to lack of parental involvement Viza made mistakes during his first experiences with heat which resulted in cubs through adolescence with two different females. One litter did not survive full term, Samira and Daima. Viza had mated with Akilah out of pure lust and though he mourns the loss of his cubs, he never liked the lioness.

The other lioness who bore him a cub was his brother's former best friend, Kiwa whom he calls 'Kiwi'. The two had been brought closer after the unexpected disappearance of Elak, and though Viza struggled with loving her and loving his male lover, Salar, in the end a 'normal' life was ultimately decided for him with the untimely exile of Salar. Kiwa disappeared much throughout their daughter Suma's life, reappearing only in large events such as Abasi (Zola's lover) breaking his jaw almost fatally.

Besides this, Suma was raised by Viza. Jealousy got to the young female when Viza and Kiwa made up and produced another litter. Suma became set in the mindset that she was just a mistake and was bitter to the fact that new cubs brought her parents together where she had not.

Currently Suma is plotting the usurpation of Viza using the aid of Salar, Viza's youngest son Najja, among others. Viza and Adama, his oldest son whom will sustain a serious injury during the usurpation trying to defend his father, will be driven to the north to seek the aid of Elak and Jahli, the monarchs of the cold lands, and shelter to reside.