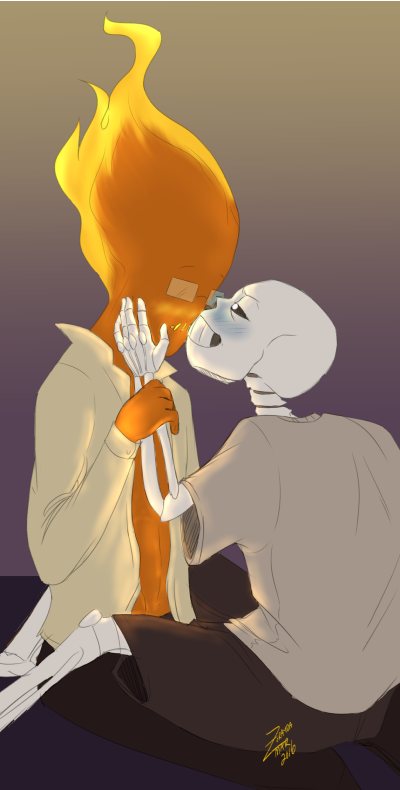 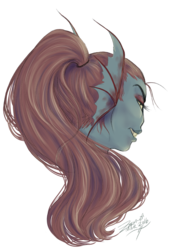 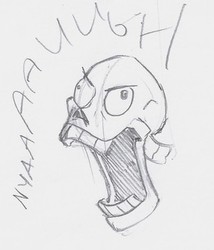 Soooo I ship Sans with so many characters, Grillby being one of them. This one is based on a short roleplay I did with demydems from Tumblr. I put an excerpt of this bit below from Sans’s POV (me). There’s a little bit of alcohol usage and fluff.

I have no explanations for this THEY’RE CUTE OK.

“Heh heh… ahahaha–whoa shit!” Sans’s chair tipped backwards because of his awful habit of always rocking them onto their back two feet, but being drunk and doing that was apparently not a good idea. He almost reached for his magic, to teleport a few feet away to save himself from falling, but his reflexes weren’t so good. Plus, he realized he’d been rescued by the fire elemental who was now hovering over him worriedly, mumbling something about that dumb joke Sans had just made. The skeleton wasn’t really listening, though.

When was the last time Sans had really noticed how beautiful this monster was? The flames that made up Grillby’s body danced and flickered, radiating warmth and color. His uniform and glasses could have been seen as a bit comical or silly, trying to contain a fire into a humanoid shape, but somehow it looked good on Grillby. And the way his face lit up whenever Sans looked over at him, the way Grillby’s face flickered into various shades indicative of blushing, the way he fussed over his wrinkled uniform.

“Grillbz,” he murmured, surprised to hear that his voice had lowered a few octaves. Sans reached up and touched the bartender’s face. The skeleton was still flushed from the alcohol burning in his system, his eyes half-lidded. He would never have been brave enough to act on the impulse to touch Grillby before, but thanks to that scotch, well…

“You’re fuckin’ beautiful.” The words slipped out before he’d meant them to, but right now, Sans didn’t really care all that much. The sentiment was true, and regret and shame were just not there–maybe he’d be ashamed tomorrow.

The skeleton brought his other hand to the opposite side of Grillby’s face, now cradling it between two hands. And he leaned in, pressing his teeth to the bartender’s mouth.

As a skeleton, there really wasn’t much Sans could do when it came to kissing. But the sentiment was there, and Sans’s thumbs stroked the sides of Grillby’s face, his body subconsciously leaning in to the delicious warmth. It lingered for a few seconds, Sans leaning back and putting his forehead to the flame elemental’s. Tiny, nearly invisible tendrils of smoke escaped from between the gaps of Sans’s teeth as a result of the kiss.