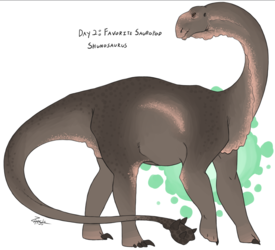 Day 1: Favorite Theropod
I guess this is sort of a cheat since my favorite dinosaur of all time is a theropod and NOT Dilophosaurus, but favorite altogether comes later on in the challenge, so this guy is a runner up. He's my favorite because he was the first dinosaur to open my eyes as a kid and realize that Jurassic Park wasn't the only option for interpreting dinosaurs, when I went to an exhibit and saw one of these towering over my head.

Depicted here is a male in 'almost' breeding colors, he's probably gonna brighten up a bit more. Also while drawing this I got curious and did a bit of research, turns out nonavian dinosaurs didn't have kneecaps? I'm not sure how to reflect that in cartoony art though so I'll probably just not worry about it.

Things you'll learn about me over the course of this challenge: I love dewlaps. I'm one of those people who believes feathers weren't just a maniraptorian thing and that a majority, not minority of dinosaurs had some amount of protofeathers/feathers/bristles/quills. My favorite dinosaurs are the ones that look like big dorks.

I've never done an art challenge before. So obviously, somebody I know sends me a dinosaur one to start that trend in me... I dunno who to credit with the challenge concept? If anybody else does let me know and I'll edit them into this, a friend literally just sent me the list of days in a skype message, heh.