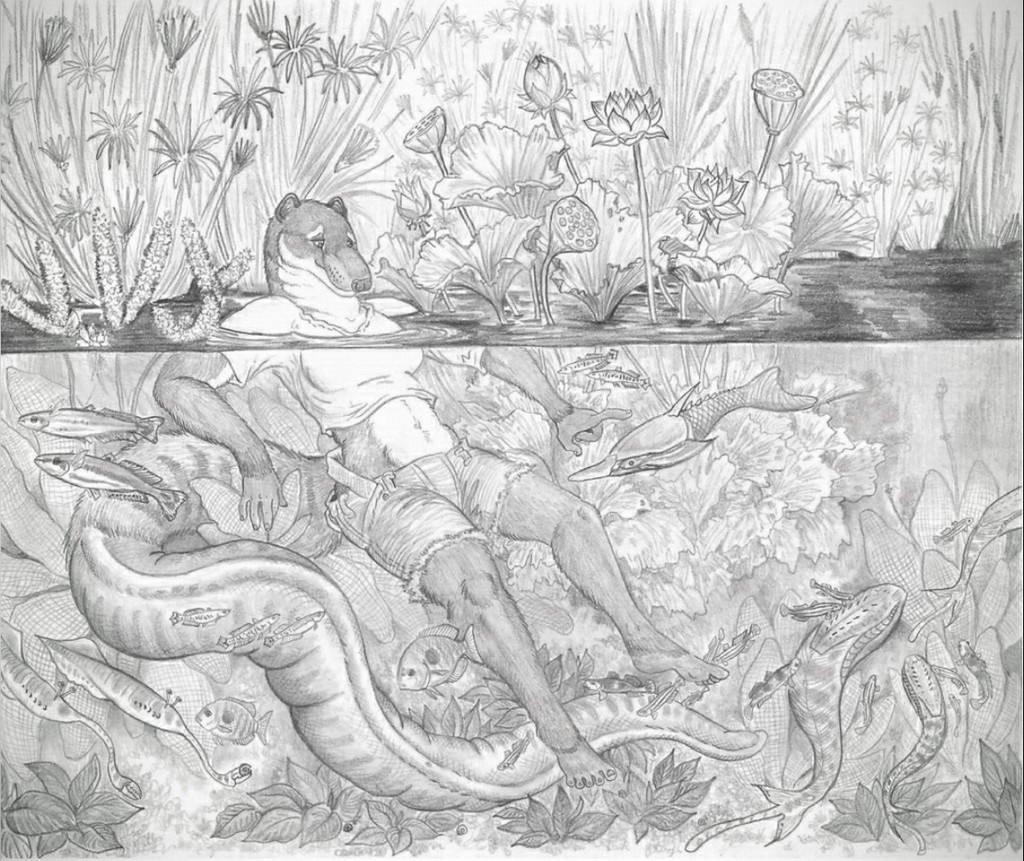 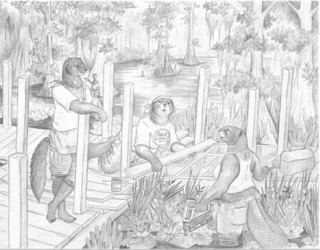 Rakali lay down amidst the papyrus and the sweet blooming lotus and Malagasy lace plant flowers. She enjoyed the soft tickle of the schools of little stiphodon algae eating gobies that nibbled on her toes and tail. She could see armoured jawless fish such as pteraspis rostrata, and sacabambaspis janvier also gathering to be groomed by the little gobies. All kinds of Bedotiidae rainbow fish also flitted and flicked in the warm clear water. If she sank deeper into the water, the songs of kingfisher, marsh hens, and redwing blackbird would be replaced by the crunching sounds of cichlids and tully monsters cracking snail shells.

She had heard one of the old terraformers who had designed this ecosystem call this "eco-poety" just as a poet does not create the language but arranges the words into verses and rythems, the geneticist arranges God's language of DNA into living art pieces. This environment was a wonderful song of praise to the glory of the Creator. He had sent his children into the world to fill creation with the song of life.

Rakali, cleared her mind and let the love of God move through her. It was sad the way some people try to understand reject or explain the nature of God through reason, ideology, or science. To do so is to miss the point entirely. The mind can't contain the infinite, any language can never contain or describe the form of it. Yet the omnipresents of God means all that any being has ever known or experiences is evidence of God's existence and an appeal from the Creator to each child, of the love that is freely given if only accepted.

This is another picture of Rakali, my giant otter shrew (Potamogale velox ) character. She is one of my few characters that actually appears in my dreams some times. She is asexual and aromantic. She would probably be diagnosed as having prefrontal epilepsy because of her religious visions. I think there is a part of me that is deeply envious of the freedom she represents from the concerns of the world. To return to the isolated bliss of my childhood when God and nature were the only interests I had. I needed and wanted nothing from anyone else in the world. Life was better that way.

I had so much fun drawings all these little fish and aquatic creatures. Both species I adore from my aquarium geek days and my fascination with the fossil record. I didn't use any lighting effects for the underwater section because this is all about the critters. I started to wonder if I had drawing her tail too big, then I realized that is impossible, because giant tails are awesomeness.