The air was glacial; not that they didn’t expect the weather to be kind to them, but there was always a little hope in everybody that luck and good fortune would prevail and make any situation better. But it was fool’s gold; nature was no one mistress and there was nothing they could do to change it.

«Could we hurry up? I don’t want to lose my fingers because you think this is the good time to do that ritual of yours»

His name was Henry; usually the patient lad, he was dragged in the adventure by some obscure reasons that even him couldn’t understand anymore. Not that he complained about that fact; an adventure was a way for him to fight the boredom from the daily, anyway…

«Oh shut up; you want to do this as much as I want to do. I have to do it, do you remember? It’s not like I enjoyed reading those old books and talking to those senile old fools…»

The one talking was named Paul, a local thug. He tried reforming himself, but the thrill of petty thievery, vandalism and assaults were too much to let go. That’s why he was caught and fined, with an amount he couldn’t afford.

«Really? Didn’t you enjoy passing some time with those pleasant folks? Sure, they babble a lot, but deep inside, they are just like you and me; they crave social contacts and soft foods»

The young man stayed silent; he wanted to punch his friend, but he knew that this was a way for him to fight his fears; after all, there was always a chance that everything they worked for would be for nothing… or maybe it would make everything even worse, who knows?

«Why do we have to do this outside anyway? In a cemetery of all places… couldn’t these rituals have flexible locations, so we wouldn’t freeze for nothing outside?»

Henry was a whiner; not the bravest, he was always trying to appear much braver, but he always knew when to retreat without consequences…

The book itself was nothing out of the ordinary; covered with grey leather, the words on it faded from the passage of time, it could have passed for an old book on any possible subject. Even opening it couldn’t betray its nature; there was actually a story written inside, nor pleasant to read, but bearable. To find the summoning formula, the pair had to find another book, which contained a code that helped them read between the lines; one could think that this was simply the fevered dream of a loner or maybe the way for bored teenagers to pass their time, but it was deeper than that. The ideal of a quest, the promise of something better, an ideal to fulfill, promises of better tomorrows…

Or maybe it was simple greed that motivated them; after all, working was hard and there was always an easier way to make a quick profit, even if it meant passing hours reading ancients texts that gave them headaches.

«Now, do you remember your lines? If we screw up, there will not be another chance for a long time»

«I know, I know, Henry; don’t take me for an idiot… I’m more afraid that you’re going to ruin it…»

He stayed silent; this wasn’t the moment to start an argument over something that could have been considered trivial. But it stayed in his mind; after they would be done, he would make sure to get a little revenge on him, to teach him not to make fun of him. Or maybe he would forget about it; sure, it irritated him now, but memory wasn’t his friend and in a few days, it would betray him and make leave him with dazed memories.

They stayed silent; the words lingered in the air, as if they had a life of their own, but even with such a sentience, nothing followed.

«Ah great, we wasted our time in a ridiculous quest…»

He glanced at Paul, not believing that it was actually true; he couldn’t believe that his whole purpose was now pointless, reduced to returning to his normal life and pretending that it never happened. Or was it really? He could always return home, but then he would face the usual boredom…

«Hello, you reached the pandemonium hot lines; all your demons are occupied for the time being, please hold for the moment»

They looked at each other, not believing what they heard; they would have expected such a thing from a local business or any kind of service, but to hear it from demons…

«Please hold while your summoning is being processed…Hello, this is Akela Lycan Archfikami and I will be the one handling your request; to speak to one of the demons, say his name. To access the department of complaints, name your complaint and you will be directed to the appropriate service. If you don’t know which demon you want to talk to, but know which department he/she belongs, then say the name of the department and you will be directed from there. If you are lost or confused, don’t be afraid to ask me; it is my duty to guide the summoners.»

They looked at the demon in front of them, which appeared while they heard the message. It looked like a dragon, covered with black scales. It stared at them with his four eyes, his wings beating the air softly; it was a tall and muscular being that seemed a little out of place to be a simple receptionist, but again, they didn’t knew much about the hierarchy of Pandemonium…

Paul snorted; even though the creature looked fearsome in appearance, it was no different from any other form of authority he targeted before.

«Is this joke? Did we really did all this quest to meet a secretary? »

«No; if you listened well, you would have…»

The demon didn’t have the chance to finish, for the duo interrupted him, caring little for his input.

«You know, I’m wondering if this was a really good idea in the first place; if a summoning can’t give a decent result these days, then why are we still here? We are wasting time, aren’t we?»

«Now now Paul, don’t be in such a rush; maybe he could helpful, if we let him talk a bit…»

They looked at the demon, expecting from him a clever and useful response; could he deliver it or would he fail miserably, making a fool of himself?

«Do you even know the name of the demon you want to contact? Or the department? Without that information, I’m afraid you wasted your time»

They looked at him, an awkward silence falling on the scene. They stared at each other for a moment, uncertain of what would happen next…

«So, this entire quest was for nothing? All of these efforts were wasted? And now we are stuck with a lower grade, useless demon that can’t even solve the simplest problem. Hey, demon, yes you, the spineless bureaucrat; don’t you have something better to do, like filling some paperwork or reminding yourself how desperate you really are?»

Akela looked at them, impassible, but his temper rising; mortals should be grateful that they could even have the chance to summon a demon, even if it didn’t give them the result they desired. Foolish beings should know their places…

«You can’t respond? Maybe you should hurry back and get back on all fours down there; someone must be missing your presence…»

This was the thing that made Akela lose his cool; before Paul could react, he was grabbed by the neck and lifted in the air, a clawed paw holding him.

«You tested your luck long enough with me, mortal. You could have stayed quiet, you could have cursed your misfortune and leave, but you had to tempt fate and make me lose my temper. But I suppose I should thank you; after all, it’s not every day I have the opportunity to have a fresh mortal soul… Let me… have a taste»

Akela opened his jaws, placing them near the mouth of Paul; he could see the rows of teeth and feel the hot demon breath on his face, the scent of sulfur and brimstone engulfing him.

Paul didn’t know what was happening, but all he could feel was that something was being drained from him… he could see the past flash in his eyes, his memories escape from his mind, as the feelings he once felt started to disappear from his grasp, making him panic. His mind started to race, but was it really useful? More he tried to think, less he could remember and less he could feel. He tried resisting, pushing the beast away, but his strength and determination were no more. He couldn’t remember who he was, nor why he was there; he felt no pain nor fear, an empty shell that soon discarded by Akela, for he didn’t needed him anymore.

He then pointed at Henry, who tried to make himself smaller, escaping the judgement of the clawed digit.

«You’re a clever one, but your attitude will be the reason of your doom, one day. Enjoy my mercy, for now… Who knows what will happen in the future?»

Henry looked at the demon disappear, leaving him with Paul, who wasn’t responding to anything anymore. How he would he be able to explain this situation now? 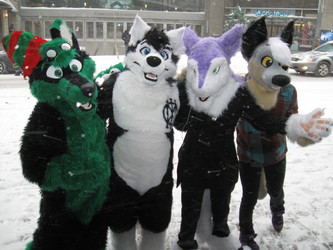 A request for someone on FA