I've Got Your Back by Xepher Sicarius 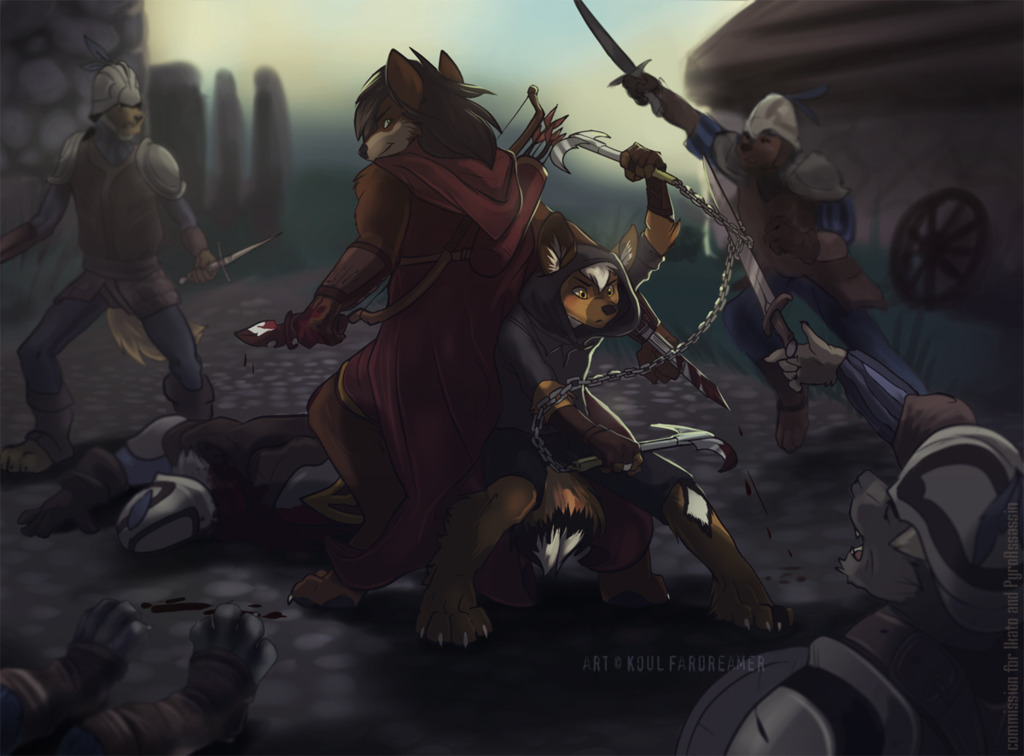 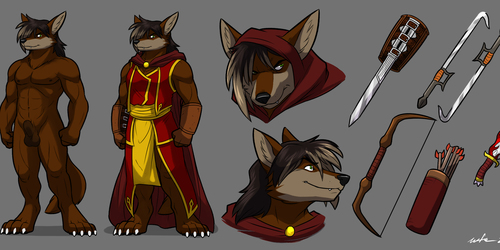 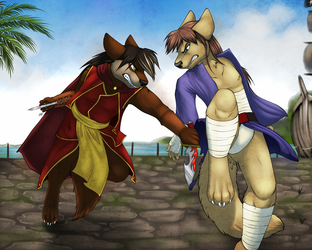 I've Got Your Back

A master and an apprentice fighting with a bunch of guards. How cool is that? :D

This was a collab between me & my good buddy Ikato drawn by Koul from FA. Ikato even wrote a story to go with this pic :D

A shadowy figure stood quietly in the shadows of an alleyway. The occasional visible breath of air was the only indication that anyone could be hiding there, of course no one would pay enough attention to one spot long enough to notice. The boy took a deep breath and closed his eyes, this slightly raised the chances of him being seen but he needed it to relax himself. This was the first time he was being allowed to carry out a solo mission and he was going to make sure it wasn't going to be his last. He resisted the urge to shuffle around to try to heat his body even by a little, the morning chill was making his muscles stiff from standing still so long and the steel from his weapons made him even more uncomfortable. Kailin took another deep breath. He needed to focus.

The sound of hooves and a large number of footsteps made his eyes snap open. This was what he was waiting for. The boy pulled his hood over his head as he slowly made his way to the entrance of the alley, being careful to remain hidden in the shadows. It wasn't long before the passing faces of guards could be seen. It was then that a single horse came into his line of sight, mounted by a lavishly dressed fur. Shamir Bordeaux. A noble with many ties in the royal court. Someone who claimed to be a man of the people, but it was a well known fact that he was everything but. His corruption and greed had gotten so blatant that it couldn't be ignored or else the people would revolt. Obviously he had gotten away unscathed, probably by bribery. Needless to say the public wasn't pleased, the result being this. The missions had originally been given to the boy's master, however he felt that it was time for his apprentice to be tested solo.

Now was his chance. With practiced hands, the apprentice lifted the tail of his cloak slightly and pulled out his kusarigama, and in what seemed like one flawless motion, threw the one in his right hand towards the small crowd of guards. He ran towards them, pulling back the chain of his weapon and returned the handle of his now blood stained tool. He ran over the body of his first victim and made a mental note that this person was no longer a threat from the look of the wound in his neck. If this guard was standing even a foot in any other direction, he probably wouldn't have had to die. But he wasn't standing elsewhere. He was in the way. By this point, the rest of the guards were just now sensing that something was wrong. Swords were being unsheathed but it was too late though. The apprentice crossed his arms and jumped towards the terrified face of the fur that was attempting to scramble off of his horse but far too slowly. "Stop you!" One of the guards called out, but at that point the cloaked boy's arms had uncrossed, sending a head rolling towards the shocked but now armed guards.

The apprentice didn't have time to enjoy his enjoy his success of his kill. He was being surrounded, and quickly. "Stand your ground, men. He's just a brat." One of the guards called out in a mocking tone. The apprentice clenched his teeth together, realizing that he had made the deadly mistake of not taking into account the exact number of guards. The now master-less horse shouted loudly and ran off into the distance, breaking apart the circle for just long enough for an escape. Without hesitation, the assassin dipped low to the ground and ran as fast as he could for the gap, only to find a leg quickly approaching his face. The boy just barely managed to avoid a broken nose by sending his own foot at the oncoming leg. Though he blocked the attack, the man was much older and stronger than he was. He tumbled on the ground, managing to stop himself by rolling over and digging his blades into the ground. This was definitely a worst case scenario where he did not have the luxury of stopping to carefully consider his next moves. The second they close in on him and this turns into a game of strength, he was would be as good as dead. The apprentice pulled on his kusarigama handles as hard as he possible could for momentum and being sure to remain low to the ground, ran at the guard with a resolute expression and a murderous intent so strong it was almost tangible. He couldn't afford to get careless, since he was now fighting for his life and the odds were not in his favor.

He aimed low, sending his foot flying into the crotch of the guard. The man cursed something unintelligible before shoving the boy back with his shield right as a hooked blade was attempting to slice through the guard's stomach.

"Y-you little shit!" The guard roared while trying his best not to leave himself open to nurse his injury. "Have you no honor!? Just for that I'm going to guy you alive! You're going to regret ever leaving your mother's tit, boy!"

The apprentice positioned himself in a fighting stance in the center of the circle, keeping a close watch for anyone that would try to attack. The other soldiers were laughing at what had just happened, even making bets on who would kill him first. The boy held his ground while wearing a deathly serious face, almost daring one of them to attack. But the truth was he was tired. He had only managed to take out one of them and he already losing stamina. He cursed at himself for being so stupid.

It was then that he heard the familiar cry of death from someone behind him, followed quickly by a second. From the boy's peripheral vision, it seemed like a blur of red moving about the guards, leaving a trail of bodies in its wake. The circle that just a few seconds ago was threatening his life, was now a mass of confusion. Some of the guards ran, realizing what was going on, or rather who was here. The ones that stayed were ready to fight to the death. There was a tense moment of silence until the apprentice finally spoke. the name everyone was thinking.

"Hey Kailin." He spoke nonchalantly as if they weren't surrounded by enemies. "Looks like you've managed to get yourself into trouble."

The same guard that Kailin had failed to kill just a few moments ago raised his weapon and charged at the elder assassin. This was his first mistake. His second mistake was forgetting about the other assassin. Where a sword would have hit flesh, the clank of metal against metal was heard. The sword had been caught in the chain of the kusarigama. The guard cursed and attempted to flee but it wasn't before he received a deadly slash to his gut.

Xepher glanced at his apprentice and smiled, a proud look in his eye as he readied his own weapons once more. Kailin returned the smile before concentrating on the guards once more.