Xav Will Soon Be Free - "Forever Unfinished" by XavierMaldonado1 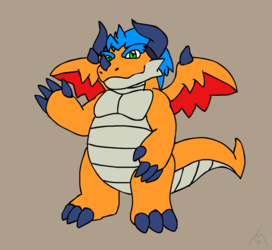 This is the last repost I swear! I just assumed you guys didn't like having to click on links to watch the animation. Truthfully I didn't want to put in the swf file because I wanted it to have some kind of player bar like Rangarig's has. But googling has been of no use at all nor has searching on youtube. So yeah, here's the endless loop of my crummy animation

This is an updated repost of my unfinished animation. I actually had to go back and change things up a bit more in favor for a friend who's already close to having a kind of break down, and I don't want to add more to it.

When I did that, I figured I might as well color the rest of the stuff. It took a bit of time and it took forever to upload onto mediafire considering how bit the file is…but I think it's much better now, if only slightly since yer not looking and just unfinished lines, now it's in COLOR! HuHUUU!!

Sidenote, my mate suggested a different picture since…well, a picture of an unfinished drum doesn't say much. So I changed it, hopefully it'll grab more attention now! Heh, Enjoy. Oh and an edited repost from the deleted submission from before!

So yeah, about that huge project I've been trying to keep "secret" and been working on forever. This was it, emphasis on "was".

This was an extension of another animation I did much, much earlier that was for myself as well as for my friend. But I took that down because it involved another person whom he never got permission for, which I could've fixed by changing the colors but meh.

Anyway, I had more scenes planned…well, one more, were the Latios gently nudges my fat rear while looking ragged, I budge, he gets excited n' flies out the back window before rounding the front n' pulling on his ears.

You'll have to crank up your sound to hear the music, it's a bit quiet and muffled. I actually went way out of my way to remove the vocals from that one song, since none ever existed without the vocals. Honestly I like it so much better without the singing, but that's just me.

Why is this to remain unfinished? Well, for one, I got completely burnt out after working on this for a solid month or two, then my job came into play and I was just exhausted all the time. Two, I felt like I was just copying the scenario frame by frame and scene by scene, not recreating it and trying to make it better.

Before I posted this, I figured I might as well fix up the colors on myself to represent me currently and well as change the color of the Charizard to that of Typhlosion to ease the confusion.

I think I did a pretty decent job considering. If anyone else though feels interested in completing what I couldn't, here's a link to the flash file and have at it. Yer free to change it however you wish, I'm just leaving the "animatic" as it were.

To reiterate, you have my full permission to do what you want with these files because I've long lost desire to finish what I had started.

Enjoy the movie though, I guess.