Grapple Queen by EvonAllure by WolfRider 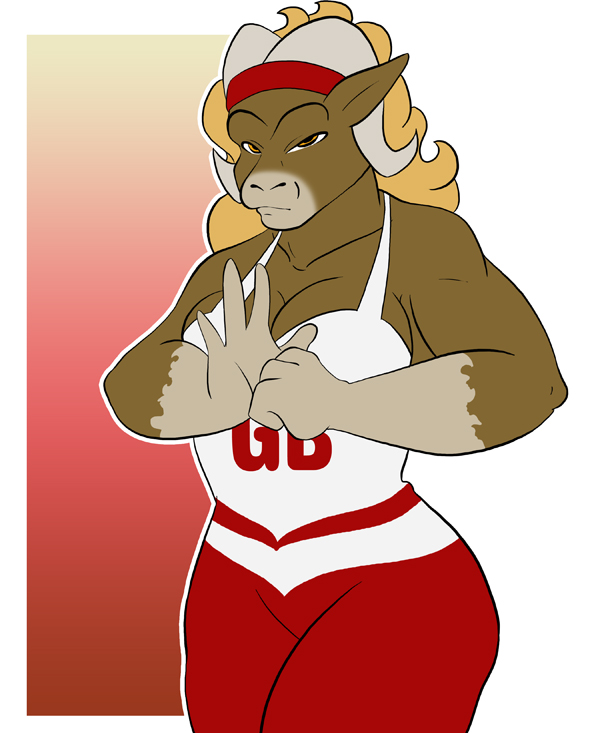 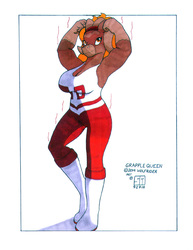 Another Awesome Commission done by

Here we have Grapple Queen, the Bank vault breaking third in Command of the Gym Brats Gang.

Appearance: A tall muscular and Plump female Musk ox, being around 6’11 in height, with brown fur and large horns. She her orange eyes and orange messy long hair. She has a huge 40E bust for her size as well as big crushing thighs, wide hips and a large butt.

Outfit: A Red and white V striped patterned style sleeveless catsuit which is made out of spandex and latex, with the Big GB logo in the middle. A red headband, white socks and Red and white shoes.

Powers: Genetically modified body which gives her enhanced strength, speed and durability. She can Shoulder barge a pickup truck and tip it over with ease and uses lifting weight as handheld weapons, both to melee and throw. She is heavily skilled at Wrestling, as can pull off any kind of wrestling throw, move and grapple. Due to her genetic modifications and from her training by Head Coach she has the strength and ability to physically manipulate the bodies of her opponents. If she gets a hold of her opponent she can slowly compress there body and flatten and reform them into any shape she wishes, so long as she can keep the opponent in her arms. She can flatten her opponent into the ground like a pancake if she body slams or sits on them while applying alot of pressure, she can keep her opponents arms tight at their sides if she bearhugs them into place. She can squeeze and roll up her opponent into a ball to kick and bash around, or she can be creative and shape her opponent into an object like weights for her to lift, or a towel for her to clean herself up with.

Bio: Former star athlete and College freestyle wrestler for Union University, now leader of The Pancake Maker and third in command of the gym brats’ gang. She escaped with Head Coach and Thrasher when their operations at the college are exposed and now hide out around the industrial junkyards of Colmaton along with the rest of the gang. She was once the star of the wrestling ring at Union but is now works for the gang as an enforcer and vault breaker, able to crack open any vault with her bare hands as well as crush and pancake all opponents in her wake.

Personality: Elisabeth is a proud and prideful fighter; she will fight anyone in the ring of honour if she feels they are worth her time. She will fight both cleanly and dirty as she is not afraid to do what it takes to win, and she hates being called a loser and a person without honour. She is straight in sexuality and loves to intimidate younger and shorter males with her size and humiliate them by carrying them off back to the hideout. She also loves to make does that piss her off into living trophies using her compression powers, keeping them back at the hideout for a short amount of time to teach them a lesson.

Grapple Queen and the Gym Brats belong to me