Fitness Geek by EvonAllure by WolfRider 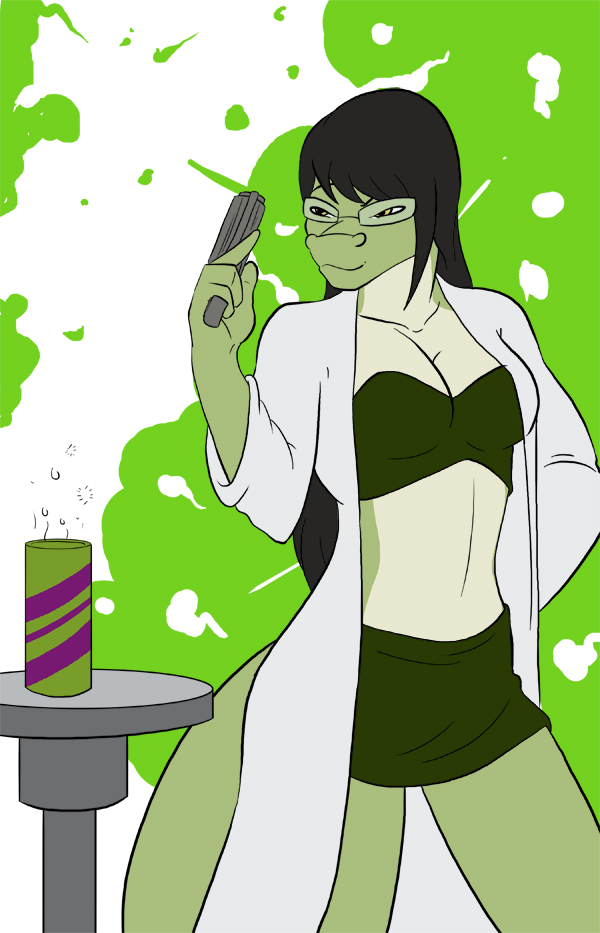 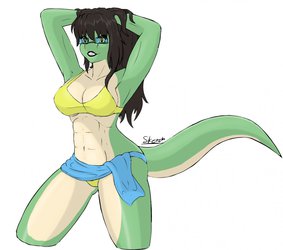 The Last of the Recent Awesome Commissions done by

Outfit: A white latex/rubber lab coat, Olive green tank top, fish net stockings, geeky scientist glasses that she wears so no one would know her identity, as well as her scales begin Aqua and her hair being yellow, which also help her to keep her identity.

Powers: Genetically modified body which gives her enhanced strength, speed and durability. Skilled at grapple fighting and fitness torture techniques and is armed with a stink gas gun and her genetically modified energy drinks. She also has limited charming abilities, as she can relax and tame people with her voice, distracting them by making out with them during combat and slow dancing.

Bio: Currently she is a student at Union university studying sports science, fitness and chemistry. She genetically modified her body in order to change her scale and hair colour at will to keep her identity hidden from the other students. She works for Head Coach and the gym brats’ gang, designing their weapons and genetically modifying all members as well as designing the torture devices the gang uses to torture their victims fit. She is currently fourth in command of the gym brats.

Personality: She is popular, but not a jerk likes Desmond and Millie, she maybe a member of the gym brats but she doesn’t bully people at Union University. She is friendly around the fellow students, befriending some of her gangs most hatred enemies without knowing and secretly holds crushes for some due to her bisexuality. She loves to be alone while working on her most secret projects and will get pissed if you disturb her; she’s even gotten mad at fellow brat members while she works in her lab expect for when it’s Head Coach. She also likes to be alone when she is fighting one on one with an opponent that she has a crush on, wanting to pin them down and snuggle them up in her arms and take them slow dancing around her lab.

Fitness Geek and The Gym Brats Gang belong to me