Jock King by EvonAllure by WolfRider 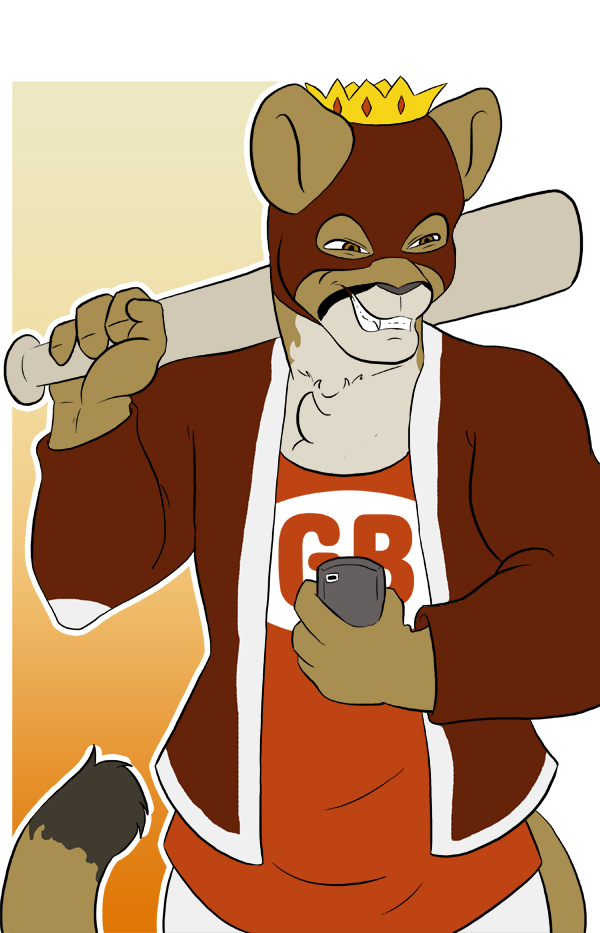 Another Awesome Commission by

Here we have the sixth in command of the gym brats gang, and master of rioting, Jock King!

Appearance: Standing at 6’5” and having a kickboxer like muscular build. He has brown eyes, short black hair done up in a wide Mohawk. His fur is the same as that of a mountain lion.

Outfit: A Standard college uniform but in red, maroon and white colours. The uniform is made up of white jeans, a red and white T Shirt with the GB logo on it and a Maroon jacket with a yellow and red GB logo on the back. He also wears white socks, red and white shoes, a Maroon ski mask and a golden crown with red jewels.

Powers: Genetically modified body which gives him enhanced strength, speed and durability. A skilled fighter, as he knows how to street fight and cage fight thanks to his MMA training. He likes to use alot of different weapons, from knives, batons and broken beer bottles, to clubs, bats, guns and anything else he can use. He is a master of creating anarchy and violent riots with his jock squad. His personal weapon of choice is his wooden and steel core baseball bat.

Bio: Currently a student at Union University studying fitness and film making as well as a member of the Union University basketball team. Desmond was recruited into working for head coach when he landed himself in detention in Head Coach’s class for starting a fight, and was offered a deal to join the gang for his deeds. He soon started to intimidate and steal from lockers, bags and dorm rooms, teaming up with his on and off girlfriend Millie Johnson, the famous bitchy cheerleader and secretly known as Jock queen leader of the Nasty Girls division of the Gym Brats. Many suspect that she and Desmond are members of the gang but no one can prove it or are too scared to expose them.

Personality: Desmond is cocky, loud mouth, vulgar with his language, often pretends to be Mexican and acts like a gangster. He likes to cause chaos and gets a high from destroying property and looting during a riot. He is a master planner, using social media and word of mouth to organize mass gatherings which then turn into full blown bloody riots. He’s biggest weakness is the fact that he needs to fight dirty or have his jock squad backing him up in a fight, loving to gang bash people. But when his by himself he will try and fight as best he can but if he can’t win he will act like a coward and run away with his tail between his legs.

Jock King and the Gym Brats Gang belong to me