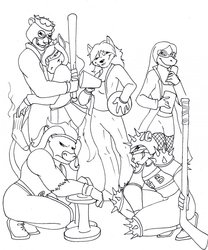 Another awesome pic done by

Mile_High_Club featuring the fitness fanatics of the Gym Brats Gang.

Jock king on the far left with his baseball bat, ready to beat up people and take there money.

Jock Queen next to him posing and holding her nasty smelling gym sock, which she uses to smother and weaken people with.

Fitness Geek hisses as she holds a can of genetically modified energy drink and her prized ipad.

There leader Head Coach, barks out orders and prepares to peg an exploding dodge ball.

Grapple Queen hauls up some weights as she trains herself and gets stronger.

and finally Thrasher growls as prepares to lay down the hurt on those worthless sports stars that waste there time texting and not taking the game seriously.

Gym brats gang owned by me