Over the Years by WindWolf 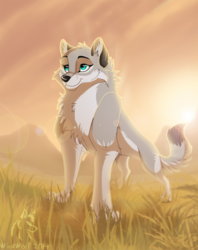 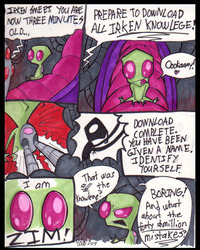 TheOutli3R talked me into doing one of these, though as you can see it is very boring as compared to others I've seen. I'm actually not all that creative. I think I'll do one of Frodo next though, he went though a lot more design changes than my own sona did and is a lot more entertaining.

Long ago (by the time I was about 5) I settled on the fact that if I were an animal I'd be a wolf, and that has stuck with me ever since. This was due to several reasons; 1, I always owned dogs my whole life 2, I was a nature freak and was fascinated with learning about all animals, especially wolves 3, I felt somehow akin to wolves in that they are usually disliked by most people and I was always an oddity, often to the point of being bullied for it 4, and wolves just somehow felt "right", if you know what I mean. I can't really explain it.

2003, age 9: Ermaigersh! I am so original! Just look at that clever solid-color design! Not. This was how I used to draw myself in the way back-ness of my life. Flat, boring, and I dunno what was up with the yellow eyes, I'll blame it on my Balto phase (yes, I had one of those too). This design lasted for quite a while, although in all reality I just didn't draw much at all back then, and when I did I didn't draw myself.

2007, age 13: Like I said above, I didn't draw myself all too often, so it was some years before I picked up my sona again. During this time we had moved for the upbillionth time and I essentially locked myself in my room for a year and tried to teach myself how to draw. This... I have no idea. I really liked blues and the idea of a "unique" looking style, although this design was quickly replaced by WindWolf who has only been through one very minor design change. This was also right when Icei and I created the Forsaken Mountain and when I discovered my wind element. I quickly took the name Wind and it has stuck ever since. It was late this year that I joined DA, although this design never made it to the public.

2008, age 14: This is the closest to my final design, really the only differences were the longer hair and the colors were slightly lighter. This was a pretty bad point in my life; my grandma who I was very close to had just died and my dad had lost his job and started working in Idaho while we still lived in Utah; we didn't see very much of him at all and when we did he was mostly just fighting with mom. I had a few friends, but I wasn't very close to any of them except for Icei who I've known since I was 2 (we have been friends our whole lives and that isn't gonna change!). During this time I drew very "emo-esque" pictures, usually very melancholy with sad expressions or bits of sad songs. Granted, I had no idea how lucky I really was at the time. I look back at myself and I want to smack myself upside the head.

2008-present, ages 14-20: And here we have the design you all can recognize. I ditched the long hair and instead sport a messy little tuft. This is because in real life my hair, although quite long, is very very messy, no matter what I do to it. Contrary to popular belief I did not get my design from Balto, but instead I was quite obsessed with Goldenwolf's art and liked the markings she would use on her own fursona, so I based them mostly off of that although I liked my grey coat. My life did not improve, in fact it got worse than I would have imagined (although I daresay it could get worse, knock on wood!) My parents divorced, we promptly moved back to Utah from Idaho where we now live in poverty, and my dad very quickly remarried a women who very much dislikes my siblings and I (I never knew the whole "evil stepmother" thing was true), and three of my pets died in succession to keep the list short and not avoid sticky details you probably don't want to hear anyway. But you pick up the pieces and keep moving on. I'm not depressed; I've got my whole life ahead of me and I can recognize the good things I do have.