Blind-Sided (Daniel and James) by WindTide 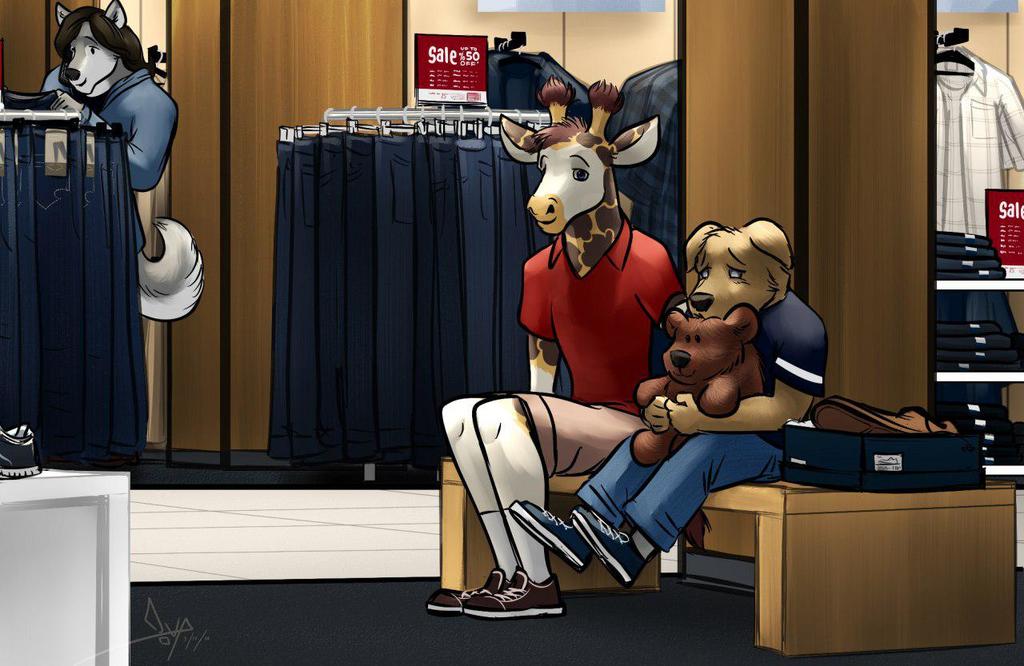 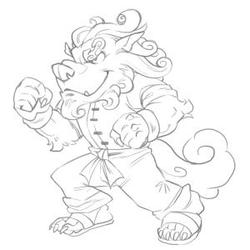 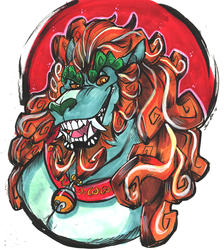 James tagged along with his parents as they went clothes shopping inside a department store, which bored the young giraffe to tears. Within the entire mall complex, among any of the other stores the giraffe could have been exploring, James was told to stick close and not to wander off.

"But Mooooommmmm! There's nothing to do here!" The young giraffe whined rather out loud in public, which was met with a swift glare from his mother as she scolded her son.

"James Sawsbury, you know better than to raise your voice in public! Your father and I are not going to take long, so please stay put." Dismay was written all over the young giraffe's face as he had to obey his mother, rolling his eyes in restlessness before he said "Okay Mooooooooommmmmm."

The lanky kid only wished that his parents let him at least bring one of his own toys during these outings, but he wasn't allowed to do so... which often resorted to the giraffe just slumping around in his seat trying to pass the time. James never understood what was so great about all these clothes, his mind filled with day dreams of going to the park or at least checking out the video game / toy store complex within the mall.

It was quite a surprise for the giraffe lost in his own thoughts that his ears picked up the sound of soft snobs. The giraffe turned his head around to see who was crying, only to find a golden retriever with a teddy bear having a hard time moving around in the store. Some how the poor kid kept bumping into the mannequins and the racks, confusing James at the klutzy behavior.

"Hey there! Watch out! You're right about to run into that --" James didn't get to finish his sentence before the canine managed to trip himself into a woman's clothes rack, the giraffe wincing as a snap reaction. "AAAAAHHHHHHH!" The giraffe quickly made his way over to help the golden retriever get up, only noticing that there wasn't something right. "Are you alright? How did you not s--"

Thankfully James was able to close his mouth when he saw the glossy white eyes of the other kid, not realizing that the stranger was blind. Those eyes were already watery with tears, realizing only just now that something wasn't right. "Er, well, what's going on? How did you get into the store?"

Only after the retriever was able to get back up on his feet did he managed to clear his throat after a sniffle, saying in a shaky voice "I-I-I-I-I-I w-w-was with m-y mom. holding h-h-h-her hand. I lost my g-g-g-grip and got separated. I b-b-b-b-been wandering all over now."

James didn't know what should he do, but to at least get the canine some comfort having been separated from his parents. For the time being, James lead the other kid over to sit on the bench next to him, saying to the kid "Why don't you stay here with me? My parents are out shopping in the department store, and I am sure your mom is looking for you. At the least someone might find you if you stay put."

The little kid squeezed his teddy bear tightly as he tried to stop crying, but the golden retriever was no doubt scared out of his wits. James didn't know what else he should do other than to wait for his parents, so he would make sure the other kid had company. "T-t-t-thank you. I-I-I-I-I-I know I shouldn't talk to strangers, but I don't know what else to do."

The giraffe merely smiled, even if he knew the blind canine couldn't see it, but hoped that at least the kid could sense it. "Then let me introduce myself, that way you're not talking to a stranger! I'm James, a giraffe! What's your name?"

"D-d-daniel. Daniel is my name. I know you must have noticed it already, but I can't see." James rubbed the back of his head as he didn't know what was the best way to handle it, before he continued to at least offer conversation. "Well, it's hard to ignore the fact you were stumbling. It reminds me of what happens when I don't clean my room!"

Somehow that managed to make the golden retriever laugh, easing the blind canine of his tension. "Haha, I guess that's true! My mom has to tell me constantly to keep my room clean!"

James managed to break the ice and continued to talk with Daniel, making the mall trip a lot less boring than James had expected things to go. He almost didn't notice how much time passed when James' parents came back, spurning the giraffe's father to ask "Hey James, sorry we made you wait so long sport. Who's your friend here?"

The giraffe turned his head around as he got lost with his conversation, saying to Mr. Sawsbury "Oh great! This is Daniel dad. I think he was with his mom earlier but got separated. I made sure that he stood by here hoping his mom might come look for him."

Both Mr. and Mrs. Sawsbury were quite alarmed with the news, especially when James got scolded once more "JAMES! You should have come straight to us! His mother must be worried sick!" James found himself getting himself tugged by his collar as his mother got his son's attention. "You're coming with me young man so we can find his Mother right now!"

"Mom! How was I suppose to know to come get you when you told me to stay put!" James started to protest to the unfair standards set for him, though Daniel managed to pipe in as he told James' parents "James didn't do anything wrong... he was keeping me company..."

Although James' mother was rather stern with her son's upbringing, she did soften her approach as he turned to James and said to her son "The next time there is an emergency, you need to get your father or I, alright sweetie? I'll go ahead and take Daniel to the mall staff so they can help him find his mother."

James stuck with his father as his mother guided the canine away, though the golden retriever managed to wave back to the young giraffe before saying "Thank you James! I hope to see you again soon!"

All that James could do was smile back, glad to see Daniel getting the help he needed. "No worries! I'm sure we will meet up again!"

James didn't know it then, but that was the start of his friendship with Daniel from that day on.

Hunky Husky wanted to surprise me with a gift picture involving his new character Daniel, and even though I might have fibbed around a bit with the story, I figured at the very least it was a believable account of their first meeting. BGN did the illustration for this heart warming piece, always pleased with his work.