Dragon Twins: Throughout All Lifetimes by WhiteMantis 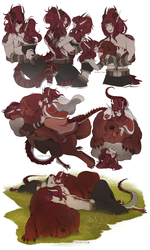 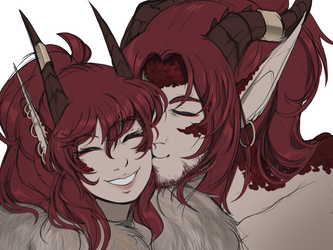 Dragon Twins: Throughout All Lifetimes

WHAT TIME IS IT NOW? STORYTIME!

(I have a huge backlog of art of those two to post, bear with me.)

Vygo and Indrys were born to a clan from the grasslands, during a time of war against a rival clan, which ended with the rivals victorious. Tradition holds that defeated clans must be subsumed by victorious ones, with its members becoming a sort of ‘lower class’ for a while, until such time that they can prove their worth in a later ceremony. All members are welcomed with the exception of those deemed useless for the new clan: the old, the sick and the heavily injured. These individuals are traditionally given the choice of either being killed in a honourable way, or exile.

The twins’ mother died in battle, and their father died from severe injuries in the following days, leaving them to be cared for by their grandmother. Although, she was old and not wanted by the victors. Granny, however, was too high-spirited to ever let herself be killed, so she chose exile alongside other 'useless ones’, and a few younger and stronger members; a gift of mercy by the conquering clan’s matriarch. Despite the adversities, these exiled members survived and thrived, forming a new clan in which the twins were raised, wild and free.

When the twins were 10 years old, their grandmother passed away due to old age. The tight-knit community that was their clan always provided for them when they needed anything, but in terms of family, they were alone, having only each other. They grew up with the ingrained duty of taking care of one another, which is something that has accompanied them throughout the entire course of their life.

One year later, during the height of summer, an afternoon of fun turned into horror when Indrys, unaware of the danger, caught a viper and ended up bitten in the face. She became severely ill and bedridden for a fortnight. The whole time, Vygo never left her side at the healer’s residence. At the time, Vygo’s innocence didn’t allow him to realize how close to losing his only family he was. He only realized the severity of the situation years later, and it’s something that has contributed to his somber personality. Indrys became more cautious, but still retained the vast majority of her carefree personality.

When they were 16 years old, they were allowed to go on their first hunt alone, a rite of passage into adulthood all clan members go through. Usually one goes alone in these hunts (in a safe place, selected by the clan), but no one saw any point in separating them. They brought more game than expected, and their success was celebrated with a grand feast.

A few weeks later the twins were sent for another hunt to provide food for a celebration of the clan’s foundation anniversary and, still emboldenedby the taste of victory from their first hunt and the subsequent feast, decided to try and take down a mammoth alone. This ended badly, with Vygo being dragged through a rocky gully while tangled in the ropes attached to the spears they threw into the wooly beast. He was severely wounded, and still has many scars from the incident. It was a miracle he didn’t die immediately. It was then Indrys’ turn to remain by his side during the time he recovered. While Vygo’s vigil for his sick sister consisted of him dutifully staying silently by her bed, years ago, Indrys’ consisted of furious outbursts, desperate crying and promises to make mammoths go extinct. The wounds incapacitated him, keeping him from fighting for some time. He feared he would never be able to wield a sword or any other weapon again, but with persistence and his sister’s support, he recovered and regained his lost skills, returning to the level of combat competence both twins had shared previously. They continue to train together, ever striving for improvement.

They now are 25 years old and enjoy sparring, riding horses, hunting with eagles, feasting on hard-earned kills, among other things. Indrys is an untamed spirit, a swirling sea of moods with currents and tides and tidal waves, always looking for a place to crash with all her strength. Vygo himself is more of an impassive mountain, stony of face and mostly unmoving, save for the occasional rumbling. However, given enough time and the correct conditions, he will shift into a volcano and erupt with enough force to flatten forests.

Both of them have the capacity for things that run counter to their natural state of being, of course. Indrys can be cautelous and serious, especially when it comes to the safety of her brother, and Vygo certainly shows his goofy and playful side, mostly when he has the opportunity to tease his sister.

What will the future hold for them? Only time will tell!