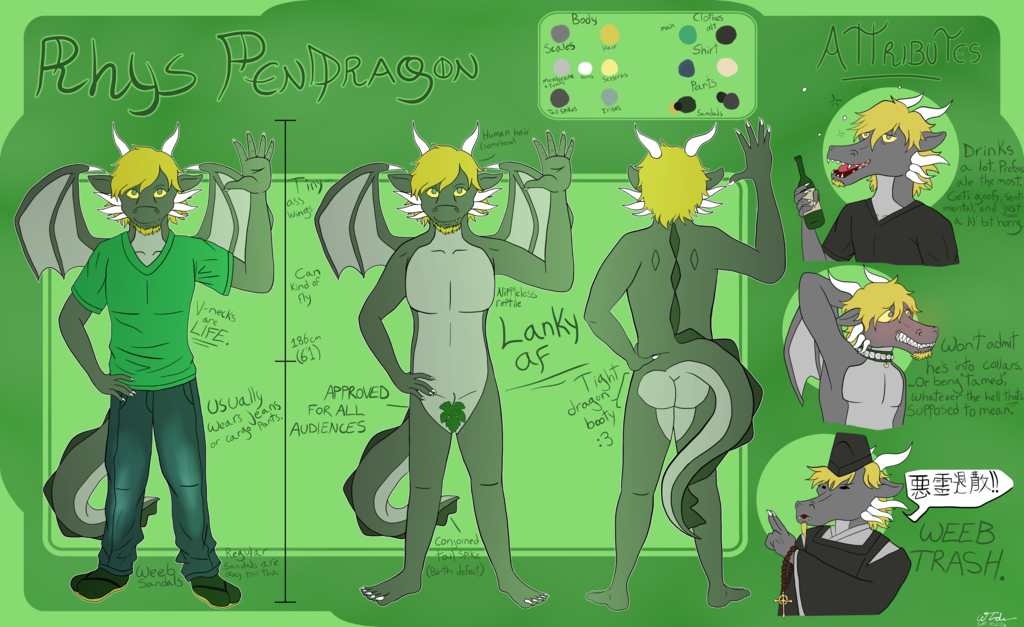 Redid my original ref from high school, which is floating around Deviantart somewhere. Cause if you're gonna create a sona based off yourself, you might as well be realistic. No saturated colors, no horsecocks on non-equines, nuthin'. Besides, it's a good way to start my time on this hellsite (or I guess compared to DA, FA or Tumblr, this plays off as more of a purgatory. Who knows?)

Whatever, go read the damn bio:

Weapons of choice: Katana, wakizashi, his breath, his lanky-ass legs

Base of Operations: Somewhere with an Italian neighborhood

Family: Has a twin brother disguised as an otter via TF2-esque disguise kit

Fears: Being lonely, slain or vored, and not necessarily in that order

Other notable traits: Has the ability to grow human hair on his head, looks good in a kilt, can't grow a mustache, pretends to understand bushido, apparently doesn't have cloaca (rumor), sleeps an average 5 hours a night; 7-10 hours on the weekends

Bio: It is uncertain as to how long Rhys has been around on this earth. Sometimes he'll say he was born five years after the Fall of Rome and the next minute he might say he was a hatchling during the Jacobite rebellions in the 18th century. Either way, he's probably not telling the truth. The same can be said for how he's able to grow hair on his head despite being a lizard (the current story is that he magically acquired hair after being baptized by Saint Columba). Because he's not able to die with the exception of natural causes, Rhys does all sorts of dangerous shit like kidnap Saudi royalty, European nobles and celebrity babies for ransom like a normal dragon should, only to blow most of it on beer kegs and fake coins to add to his treasure hoard. This constant cycle of evading international law enforcement for a couple thousand dollars a month and petty material gain is likely attributed to Rhys' search for meaning, which he finds in adhering to the ancient traditions of dragons in a world that has all but abandoned them... even if it sometimes lands him in court.