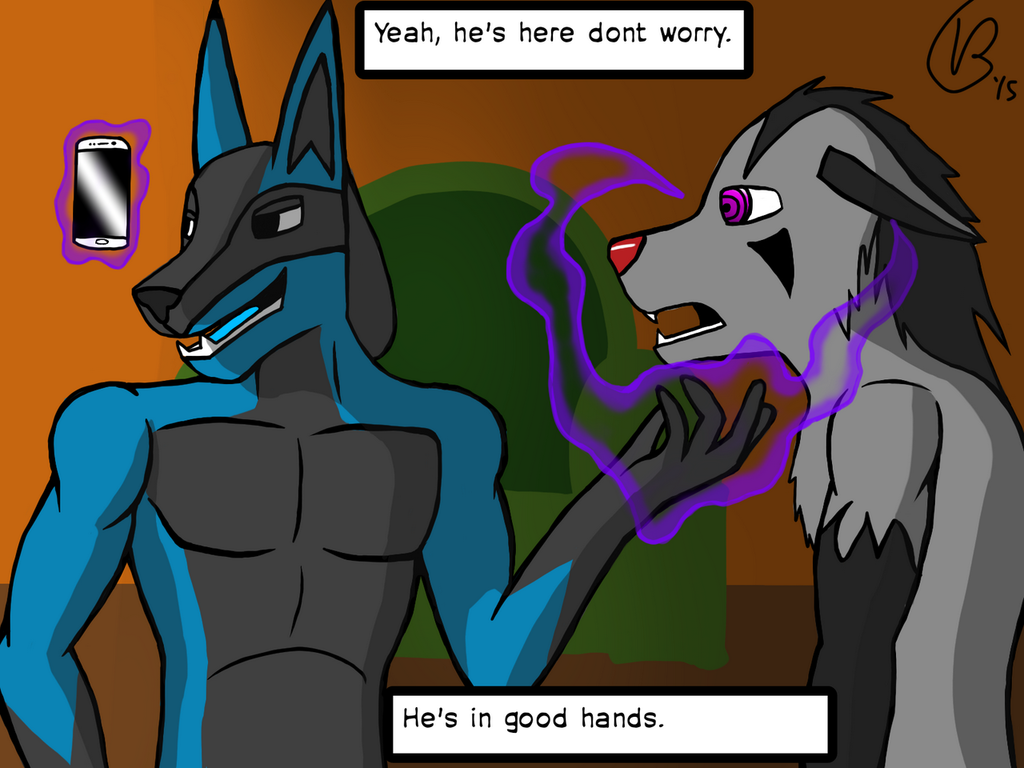 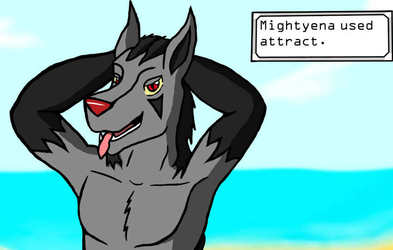 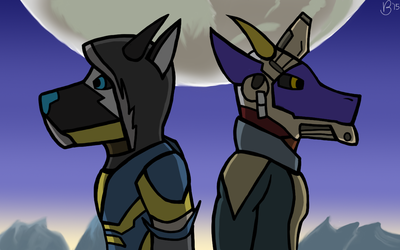 i did this one for my awesome Friend Lucareon.
His FA profile: http://www.furaffinity.net/user/lucareon

"Daddyyyyyy!" a young child complained behind him. "The Mightyena is talking to himself again!"

The Pokémon looked behind himself to look at the young Teddiursa, his Ursaring father fast asleep next to him. "Sorry, kid," the Mightyena apologized. "I'm just nervous with a big change."

"Then stop talking to yourself, it's lame." The young Pokémon pouted like it was a big deal.

"College is a big deal, kid." He ignored the kid to try and get his facts straight. Yana, the Mightyena, as said before was in search for his college. Since Hoenn had a pretty expensive plan for his program, he had to search in Unova. There was an added discount since he's from a different region, and that makes his parents pretty happy since books, dorm rent, meal plan, and travel expenses were marked down by 10%. He had to fly on a plane to Unova since it doesn't connect to Hoenn. When he landed, he got a text from his parents saying they were gonna look for a house in Unova. There was a bit of an issue when he was heading back to his place, so he was gonna stay at a friend's place. He could've stayed with his brother, Kory, but he lives on campus at a college in Hoenn. There was a rule on non-students staying for a night, so that option was taken away. The friend was the only other option.

What he didn't know was what would happen. He made a promise to call Kory when he got to his friend's place. This friend was a Lucario. They're said to be pretty friendly, but this Lucario is also part Eevee. Not that it's a bad thing, but this particular friend had gotten Yana I some trouble. Nothing serious, just some talks with teachers and the principle.

When Yana arrived at the house, he carried a suitcase of clothes and a backpack full of his electronics. He threw his backpack onto the couch and let the suitcase drop to the floor. "Something the matter Yana?" the hybrid Pokémon asked.

"It's a college overseas!" Lucareon was ready to just plug his ears since Yana had gone over this way too often. Talking about the distance from home, how he won't be near friends, and the fact people might call him out for being some party pooper. "And to add to that shitload, I have a major case of jetlag to where I can't think straight!"

Lucareon's ears perked up. He's finally found an opportunity to take his chance with Yana. "You want a way to relax?"

"No, cuz I wanna yell my brains out for the hell of it?"

Ignoring the sarcastic comment, Lucareon continued. "I've been practicing some hypnosis, maybe that can help."

"You learn from the Hypno from down an alley or something?"

"First off, a friend taught me, and second, not every Hypno is just some pervert to get some girls in bed with him. That jetlag must've created some bitchiness or something."

Yana started to walk to the hallway. "Maybe later," he replied before his friend got in his way.

"I insist, bud. Would I ever try to trick you into something?"

"Need I remind...you........of....." Yana trailed off, Lucareon's hand under his chin as purple smoke came from the fingertips into his ears. Lucareon looked into the soulless eyes, and the Mightyena was now his.

Lucareon smirked, he was gonna finally have his time with Yana; even if he had to resort to hypnotizing the poor Mightyena. An 8-bit ringtone goes off. It wasn't Lucareon's since he checked, but he dug into Yana's pockets to pull out his friend's phone. "Oh, Kory." He smirked and whispered in Yana's ear. "Go ahead and strip from your clothes," he said as he tapped on the accept call button on the iPhone. "Hello? who is this?" he teased.

"It's Kory, Yana's brother..." the voice on the other end droned.

"Oh Hey, it's Lucareon. Yeah dont worry your bro got here safe and sound." He suspended the phone in the air so he can start stripping his shirt off.

"Did he at least get in bed or something? He really can't handle jetlag."

"Lucareon, I know what you're thinking, and you're not gonna be playing with my brother!"

"Can't you give me a break? I've changed," he replied with a smirk

"I promise I won't play with Yana...better?"

"I gotcha, don't worry, he's in good hands like I said." He caressed the dazed Yana's cheek.

"Tell him I love him and I'll try visiting him before he flies back to Unova."

"Love you too, Kory," Lucareon teased.