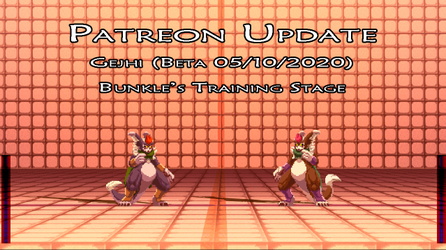 This here is Feliro. He's actually an oooold character of mine I've given a new design and "repurposed" for my project now. I planned on wokring on this boy much later on, but recently, he's been stuck in my head and my ADHD rittled brain has forced me to start pickin at him a bit. X3

He's certainly going to be the speediest critter in my roster. He'll generally have a smaller life-bar, smaller guard-bar and have lower damage output, so his kit will entirely rely on his speed, being able to dodge and dance around his foes to bait out bad moves and punish them. His combo game will be decent, having a good amount of air-combo potencial as well, but more in terms of true chains. He won't have the power to maintain juggles and keep his foes up in the air for too long. I plan to give him a pretty flexible target combo tree. Not too many of his moves will be multi-hit though, so most of his pressure will rely on being able to quickly chain many moves together quickly. He's also going to lack dis-jointed moves and projectiles. So he'll need to use his speed to get in close and and do the job and know when to get out, as his smaller lifebar can get eaten up very quickly.

As for the animation, I was gonna give him something that moved around a lot more, but I wanted to avoid making his hurt-boxes shuffle around during idle. What I'm instead going to do is add in some additional idle actions that he'll randomly do during this stance, like shuffling his feet in place and such.

I might indeed just go ahead and start developing him since I've feeling inspired to do so at the momment and add him to the soon to be potential betas after Gejhi on my patreon. After Gejhi's out, I plan to work on a few critters at the same time to keep things fresh for myself, so I'll have anything like 2-4 WIP characters coming along for patrons.

Gejhi is gettin close to finished. I've been pushing out his AI work in bits most days. I have larger more detailed plans for my AI work, but I'll just ge thte base work as solid as I can and then worry about the more complex details to add later on as I'm workin on other critters, since it'll mostly be a "helper" based AI addon that will be easy to update critters will later.