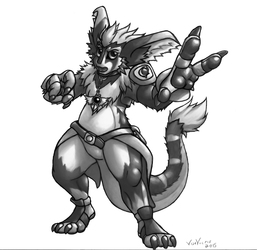 Seemingly outta nowhere from me, right? I generally grew to dislike most things Sonic related, but Sonic Mania kinda took me back to a time when the original series on Genesis was my favorite set of games to play.3&Knuckles in particular I played the shit out of, and this lil guy was always my favorite character.

I used to watch the cartoons a lot too and for a time the comics. A lot period of time went and I'd fallen off and I tried to come back to it in the Adventure games, but over time, it hadn't aged well for me and I felt the 3d games were heavily lacking in the feel that I enjoyed from the classics.

Okay, enough bullshit about all that, now to talk about Tails. This was originally intended to me my own take on him, but I ended up designing him very close to his canon adult form in the comics, by complete accident. I'm pretty fuckin okay with this.

And yes, I know his legs in particular look STACKED. I posted a still on Twitter and some folks noted that instantly. Realized half way through that I gave him some beefy legs.... Ooooooooops~ <3

As for what he'll be doing in MUGEN, I plan to take a lot of creative freedom, referencing many different things (games, cartoons, and some notable internet related things) as well as some of my own touches for fun and humor. I already have him in early-alpha working in engine, with several animations and states in working order for him. (Since I'm working over my other work, he turns into Geji for some actions not filled yet, hahah)

- His control and mechanics will follow my own personal system, this means he can freely turn, jumping and blocking are done with buttons, not directional inputs.
- I have his air-jump function as flight, similar to how it works in the classic games (mash to fly up), though I'm playing around with the math to get a good feel for the movement and also to prevent him from being able to stall too much. Overtime his lift on each mash weakens, and weakens faster the more you mash. I may create a landing-lag system for it, so that the longer he flies, the longer he will be vulnerable when landing (or at least longer if he becomes fatigued).
- I have a walk accelerator made for him (which I was planning to add to all my critters). If a short-dash is performed, he will continue his "walk" at the max speed.

That's all I'll say for now, When I have him up to beta, I'll show a lot more of him, though I may post a few other fun animation bits of him before then. There is also a certain other character in the works too and there is a hint in this submission info. That character is in earlier stages than Tails here, but you'll know eventually. I'm focusing more on Tails first. I'm on a roll with my newly scheduled art time throughout the week, so should be too long, which feels great.