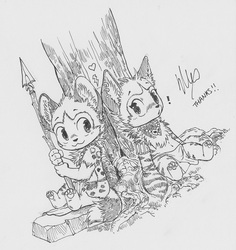 At RMFC 2014 I bought an additional sketchbook - this new one is for Naughtier Pictures! With my other sketchbook, I would let artists know they were free to draw whatever, from 'general' to 'adult'... but because I had only 'general' sketches in there, I'm guessing they didn't want to be 'That Artist' who breaks the chain. :)
So I made it easier! One sketchbook for general, one for adult (or less general). ;)

This lovely pic is of Utunu and Kikivuli (obviously), by the ever wonderful