Rose the Servine by Unownace 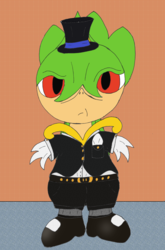 I imagine "Queen Serperior/Queen Petals" A.K.A. Ivy's mother looked a bit like this in her youth. As you can see, she started evolving much younger than her daughter, and even as a teenage Servine she started wearing outfits that would "restrict" the movement of her "hands" so that she could get used to using her vines for everything in preparation for her eventual final-stage evolution. :3

Also I can't remember if I ever gave this character an official first name before, but screw it as long as there aren't any objections it's Rose now. XD