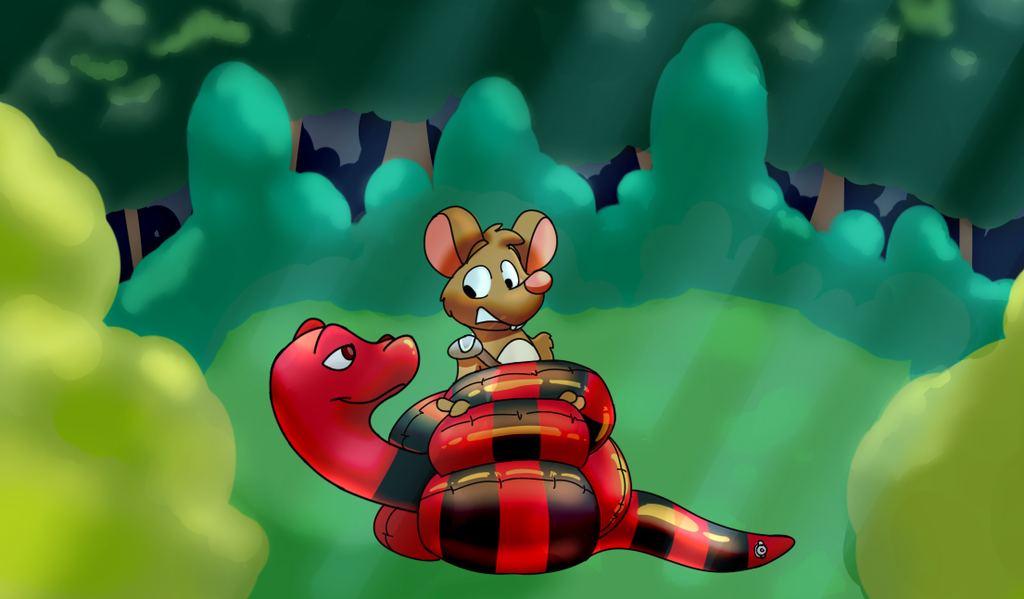 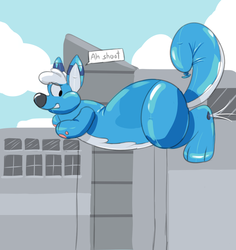 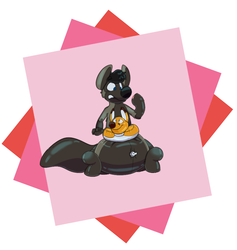 Just a little story of a mouse running into a squeaky situation with an inflatable snake.

“Ah this is hopeless!” Shouted a brown mouse with a tan belly and underside to himself.

“I’ll never find my way out of this forest. Maybe I should just take a right a the next folk in the trail” he thought to himself. The mouse had been trying to find his way out of the forest since morning ever since he decided to use it as a shortcut to get to the next village for his assignment quicker. His short legs moving in a nervous stride with pink paws lightly tapping the forest ground foliage of broken sticks and green leaves. Coming to the fork at the trail the mouse stopped.
“Hmm left or right?” he muttered as he rubbed his chin and swayed his tail gently against a light breeze that chilled the trees.

“Guess I’ll go right, always seem to have better luck going that way.”
Proceeding down the path the trees started to hide the surface away from the sun only letting the tiniest of beams shine through their canopy as another breeze chilled the trees causing them to shiver in sorrow.

Squeek, squrrk.
The mouse stopped dead in his track and turned his head around his shoulder seeing nothing but the trees that quietly lay hauntinly still.
“Strange…must just be hearing things.” He considered to himself and continued with a confident yet hesitant stride.
Squurk squeak!
His stride grew nervously with rubbing paws and darting eyes seeing nothing but silent trees on the left and right. Whats began pacing through about the sound only coming leading him into more questions that left him feel more uneasy.

“Eh…I got to get out of this place” he thought to himself while picking up the speed of his nervous stride with his right paw now posed over his dagger’s sheath tied around his waist ready to draw it from its sleep what or who appear.
Squeeeaak squrrk!
“Ok I’ve had it! Whos there and while are you following me!?” he shouted as he woke his silver forged dagger from its rest and positioned himself ready for a fight. Nothing. Nothing but the sound of of the gentle breeze chilling the trees and sunbeams dying crowding everything in shade. Everything around him frozen in silence especially him waiting to strike as another breeze but this time only chilling him and sparing the trees of more cold passed. Sweat began to drip, eyes darting back and forth watching and waiting for even the slightest sign of movement and yet still nothing. Nothing but frozen silence crowded in shade.
Come on come on he started to think growing with impatience that was swiftly rewarded.
“Oh what do we havess here?”
Here? What does it mean by here?

Squrk squurk!
“Look pal stop being a coward and show yourself!” The mouse snapped with anger and twitching eyebrow.

“Oh very well. Why don’t you look behind you?”
Feeling a tap on his shoulder he turned around only to be greeted with a tail knocking him down to the ground with a loud thump.
“Aah! That hurt!” He grumbled while he picked himself up off the ground ready to strike in till he noticed something missing: his dagger. Frantically scanning the area around him he spotted it off in the distance. The silver blade shone brightly by a lone sunbeam that yelled for its master to return immediately.

The mouse took off sprinting for the dagger to quench its urge to reunited. A tail knocked him over again sending him face first into a mass that ballooned around with a squeak. The rest was a blur to the mouse as he was picked up and squeezed by red and black striped coils that constrained him from his chest down to his toes. The coils inflating and deflating with loud squeaks and squrks trying to calm down the panicking mouse that struggled to try to free himself to no avail.

“Itss no usse resisting. Give in to the lovely squeakss.”
Inflating tighter and tighter around the mouse stopped his squirming and now with the mouse only allowed to wiggle around slightly squeaking the rubbery latex coils.
“Let me go! Let me g-” The mouse trailed off as the coils puffed with a loud squeak around him. Opening his eyes he saw the yellow of his attacker: a giant pooltoy snake.
“You’re...You’re a pooltoy? But but how ho-” He suttered as the coils puffed again squrrking and squeaking.

“Yesss I am.” He assured the mouse as his eyes studied him with a ravenousness look.
“And you are a moussse! We snakess love mice but we hardly ever get you are already here.”
“I’m not just a mouse! I’m a recruit part of the Commission!”
“THE COMMISSION!?” The snake said intriguing as he spotted a small metal pauldron over the mouse’s right shoulder. Ingrained in the pauldron starred the Commission’s sign: A shield with a phoenix protecting a sphere inside with the bold words “To Protect, To serve”.

“Well I guesss I sshould do to you asss what I have doness we have done with the othersss.”

“Others?” The mouse mind went blank for a moment only to realize the meaning of what the snake meant by done.
“No! No I am not food you here me! I am not a stupid balloon’s mea-” The coils puffed up silencing him.
“Oh but you are! Trusst me you’ll love it in here.”

The snake inflating and deflating his coils with the latex squeaking against the mouse. The mouse blushed as to how good it felt as the coils ballooned and pressed against him as if the snake was massaging him but he had to escape he couldn’t be made a meal.
“Its alright let those sssmooth ssqueaky latex coils relax you...you poor adventurer.” Soothed the snake as it continued to massaging the mouse. Opening its jaw snapped the mouse of his trance. His eyes widened and pupils dilated as his own jaw dropped while trying to break free of his captor while a orchestra of squeaks and squrrks sounded.
“Nooo, no don’t!”
Thump
The snake closing his mouth around the mouse’s head and began slurping him pleased with the squrrks and muffle sounds his meal made. Half way in the snake the mouse’s flailing grew more violent with legs kicking and paws pawing the inside of the snake’s mouth. The snake lifted his head and sending the rest of the mouse sliding on down into its throat.
Surrounded by pink rubber it was a tight fit for the mouse as he slid down the throat. Rubber squeaking and ballooning against him tightly and tautly. Meanwhile the snake watched with amusement as he saw paw shapes pressing outwards basking in how much his meal must be enjoying it and enjoying the squeaks he made.
“Yes yes squirm little moussey, let me hear those sssqueaks!”
“Mhhmm mmhm!” The mouse replied as he continued to squirm against the rubber as he slipped down further down the snake more.
Eventually the mouse stopped sliding down through throat as he popped out into a much larger room bouncing on a pink rubber bouncy castle like floor as pink and red balloons covered him.
“Ah! Sssoo good! You know for a member of the Comisssion I expected you to put up more of a fight.” Mocked the snake.
“Let me out of here! If you don’t I’ll...I’ll.”
“You’ll what? Put a bounty on my head? Can’t do that if you trapped in there!”
“Just urg let me go!” Screamed the mouse. Pounding his paws against the rubbery walls doing nothing but only causing more squeaks and balloons bopping around.

“Thatss enough now. I would keep you but I guesss I sshould bring you to the othersss.”
“Others?” Marked the mouse. What did he mean by others?

A hissing sound filled the mouse’s ear as the rubbery walls began to expand squeaking and creaking against the balloons. As the room got smaller the balloons started to press more into the mouse ballooning around him in a tight hug, rubbing against each other and the invading pink walls with loud taut squeaks.
The hissing stopped and the only thing the mouse could do now was only wiggle slightly against the hugging balloons in defeat. There was nothing he could do accept whatever fate may come as the snake content with his prize slithered off, eager to show it’s friends it’s catch.