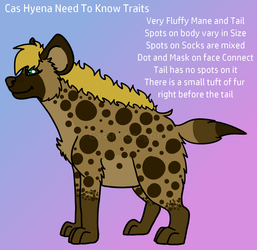 The Reference for Cas for 2016

Bio:
Confinement:
Before Cas was able to be free to join other clans, she lived in confinement at a sanctuary for several years. She'd been born into the Clan that lived in the Sanctuary and thus grew up there with the rest of the clan members. It wasn't until she was young adolescent that she'd gotten outta the sanctuary and made her way to the Savannah. (The sanctuary was miles away from the open, it served to be a hunting free zone. The animals that stayed there were protected and so forth.)
Cas comes from a family with one known sister. She has 'adopted' siblings that were such good friends, that she treats them as family.

Concorditas:
Cas was far from any form of leadership. She was still a young adolescent and was learning on how to do things. During her time with the Concorditas, she learned how to hunt properly and gained good leverage of knowing how to whoop.
She also met Moscow in the clan, and formed a good bond with him. The bond would soon turn into a small relationship which would prove to be more then they both had wished for. A few seasons later, Cas would bare a few cubs due to this relationship. They were raised in secret and before she knew what would happened to them, they'd disappeared.

When the downfall of the clan had started, it turns out Moscow had taken the cubs with him. He didn't want Cas to be forced to be a loner because many clans would not accept a female with cubs. And he was already used to a solitaire life since he'd been alone before the Concorditas.

Mkali:
This is the place where Cas gets a larger then life Ego. After the downfall of her last Clan, Cas spent several years alone and became very good at doing things on her own. She was used to being in charge and doing whatever she wanted, when she wanted. That was, till had wandered into the wrong territory. The territory of the Mkali. Her welcoming party wasn't too kind to her and tried to chase her off. Tucking her tail and running, she'd later meet the Matriarch. While out on a hunt. She wanted to prove that she was just as tough as the Matriarch and did what she could to prove her toughness. Then by some default of fate, the Matriarch allowed her to join the clan. The ones that had chased her off, now clearly upset that the stranger was apart of their clan, would cause Cas much grief in her time there. Cas wasn't fond of the higher ranked females, aside from one of them, and thus wanted to become a high rank and enforce the rules that some of them were too lazy to.

Time passes and Cas is with the clan for a few seasons before she is allowed to try and make herself a high rank. While out in another Clans territory with the Matriarch, she is given a chance to prove herself. Bring the body of a dead cub from the rival clan. This would give her the rank she desired. Cas wastes no time in this and goes off to kill a cub from the rival clan. Through a rather harsh time in getting the cub, she succeeds after chasing it around for several minutes. A bite to the neck and it was all she needed. She almost prances back to the Matriarch to show off her trophy of success. This gives Cas her rank.
The rank now comes with the big headed ego. This is where Cas becomes a very horrid hyena. She becomes hateful and treats others under in the clan very badly. In alone life she didn't realize that she should not treat others this way. Then the few that had caused problems for her when she'd arrived, were her targets for a great while. But this was not a good thing, as to it soon lead to the downfall of the clan with how horrible Cas treated everyone. During the floods in the lands, Cas ended up being swept away and was near death when she was shown to the Gods of Trial. Her mistakes and horrendous actions caused a Curse to befall her. The curse of fire. And while most would think this was a good thing, this was not a good thing at all. The curse was meant to make her a freak, and thus she'd be shunned.
When Cas came to, and had realized she was no longer welcome with the clan, she left to find herself another home. She still had a very big head. She thought the Gods of Trial to be stupid for giving her the power of fire. Her first few times used it, proved to be otherwise. Animals that seen her and her flames would flee and not come near her. Her attitude and temper also caused her a lot of grief. When she'd get too worked up, she's burst into flames and this would scare away other animals.
On the times she tried to use her flames to her advantage to attack other hyenas, she did suffer effects for her hatefulness. She lost a bit of her site and thus her pupils are no longer pure black as they once were.
(Also Cas had a fling in this clan with a middle ranked male. When Moscow had tried to find Cas, the male had chased Moscow off, due to Moscow couldn't fight back. Hearing of this, Cas cut her ties with the male. There was one cub as a result of the fling.)

Elemental Clan:
Time passed, and it took Cas a great deal of time with her hatred to realize how wrong she had been. Now looking to better her life, she has formed her own clan. The Elemental Clan. This clan is not just of hyena's, but other creatures as well. She has come to accept everyone and do what she can to helps those in need. While she has been taken advantage of, several times, she does what she can to be better. In this new lead on life, she has made many a new friends, and her mate Moscow is now back in the picture. The cubs are grown and gone on their own. Now with Moscow back, Cas has another cub with Moscow.
Key notes to know:
She is a very fluffy hyena. Despite the fact that she is suppose to be a Savannah hyena raised in heat, she has a very thick coat that makes it seem like was raised in the wintery areas.
Her mane along her back on her head is extremely fluffy. More so then it should be.
Her tail is uncommonly long and fluffy as well.

She is a VERY heavy hyena. Severely overweight but this doesn't seem to bother her or hinder her from doing things.
When she gets severely upset, her eyes turn from teal to red. This is part of the fire elemental she has. She can also encase herself into fire to protect herself.

Fire Elemental Things to know:
She can engulf herself in flames at anytime she wants. She does not have to be mad in order to set herself on fire.
She can heat the ground around her and even set a small distance around her on fire by will.
She is in the process of learning to make fire wings.

Leadership:
She is the leader of the Elemental Clan.