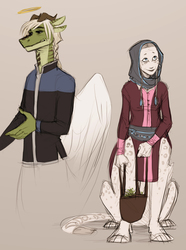 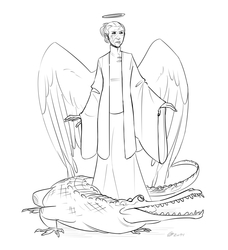 Counter piece for this other one I did years ago I guess: http://thescatterbrain.deviantart.com/art/Expressions-meme-255871202

This has been my "warm-up drawing" for a while, except every time I've spent half an hour picking away at it, I've lost all focus to work on the thing I was actually supposed to work on. Hahahahaahh ha I can't draw, I'm really sorry u__u

Balthazar: That Balthazar has spent the majority of Rebound looking super cranky has less to do with his general character and more to do with the fact that he just has a lot to be cranky about at the moment. While he doesn't do a lot of body language, his face generally reads like an open book. Balthazar is incapable of being discreet about anything ever.

Tim: You don't know Tim because I NEVER draw Tim despite how he is a very old character that's very dear to me. Anyway, Tim is/was Cutie's best friend. Sweet but kind of odd kid who wants to be a forensic pathologist and has a general interest in all things dead and gross and weird. Pretty expressive and energetic.

Jerry: Jerry is very expressive, but he is by nature a highly introverted person (even if you would probably never be able to tell) and some things he keeps to himself. Like, you're never going to see Jerry be genuinely, openly sad. Ever. He also tends to be very blank faced if he's not talking to anyone and can keep a perfect poker face if he has to.

Harvey: Harvey is an impervious brick wall. Normally he only has two expressions: Condescending smirk and utterly unimpressed. Hardly any body language either. Brick wall.

While drawing this it dawned on me that Tim and Jerry would absolutely love each other, haha.