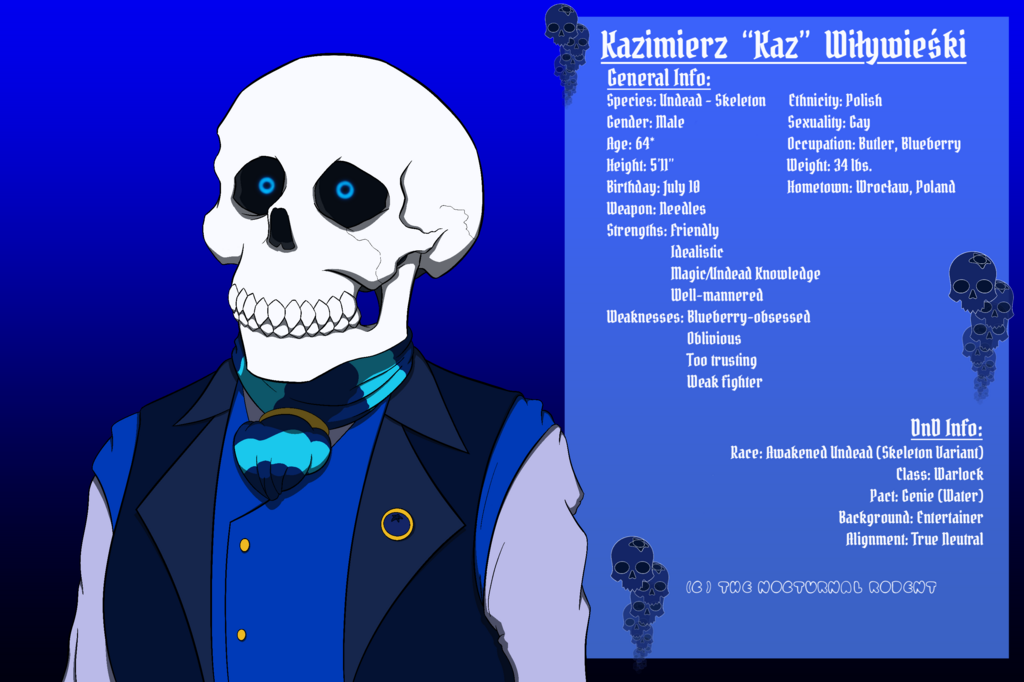 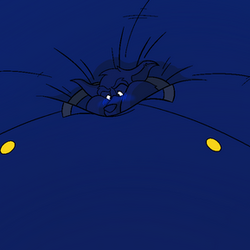 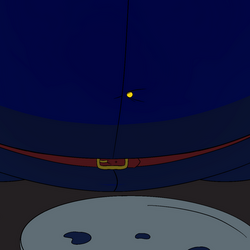 y'know I've had this character for a while now in a DnD campaign, about time I share him with people and make an offiical portrait page like I did with Malato and Umeo! This is Kaz, my blueberry-obsessed butler!

He is currently in a campaign run by a friend of mine on FA is running where he's a warlock that is really trying his best.

Canonically he is currently a butler of lycanthropy10's character Bram, and also a boyfriend of his as well!

Kazimierz Wiływieśki is an undead skeleton who has recently broke the chains from a tyrant necromancer and is embarking on a journey to escape the fate of undead. His way of doing so is very unorthodox.

Born in the mid-17th century near the city of Wrocław, Kazimierz was a human born into not extremely high society but close enough. His family was a steward family, the Gomółka family, known for their roles as Stewards among noble families throughout the Kingdom of Prussia. However Kaz was always a black sheep in the family - while his family were stern, disciplined and stoic, Kazimierz is very animated, lively and not always attentive to his job. It was notably hard for him to find work as a butler, as many were offput by his whimsical nature. It was also a struggle since Kaz was very flirtatious with men - guests, other workers, commoners. The role was very unbecoming of a butler and only contributed to failing job after job. Even worse, his reputation in many cities was trashed, making it harder to reapply for jobs. This left Kaz with a lot of resentment.

Eventually he was out of options and his family was not willing to support him through anything more. He either found a job and a place to live or he'd have to become a beggar on the streets. Kaz, by chance, found the offering in need of a butler from a wealthy land-owner out in the mountainous forests of Silesia. However this turned out to be a necromancer, Zhivozgon, one who was conducting blasphemous rituals in order to create his own small kingdom of undead. Reasons were never made clear to Kazimierz but he was deadlocked into the job now that he knew too much.

In becoming Zhivozgon's servant, he was converted to becoming undead, somewhat against his will - promised of having a place to "belong" and where "everyone would like him." This was a decision he would regret as it took away his free-will and turned him into a mindless skeleton. Kaz couldn't say all the things about his job - the years all sort of blur together; while he remembers performing duties, no real instances come to mind. His freedom came in the form of a loss of power by Zhivozgon - awakening him and breaking the control. It allowed Kaz to flee but with nowhere to go. His only hope was to use what magical travel the necromancer had and hope it would take him somewhere better.

Fortunately, or unfortunately, it allowed him to find himself in the court of fae who gave him some interesting powers. Of course undead and fae don't get along, undead are considered abominations - against nature. Which isn't what Kaz wanted, he wanted to be part of nature again and he begged them. You have to be careful what you ask of fae, as they allowed him to be part of nature by giving him the ability to swell into a giant blueberry - a curse they made based on what they had on hand available: a magical blueberry bush. A curse to most, Kaz has surprisingly been overjoyed by this as he finds it to be whimsically fitting to his personality and it absolutely tickles his fancy quite a lot! In fact he'd almost rather be called a blueberry than a skeleton anyways!

Currently he resides in the castle of Bram (who they had an unexpected meeting) where he serves as a mix of a butler and a source of blueberry juice when he needs/wants to inflate or swell. Of course he quite loves Bram both as a lord and as a boyfriend.

Fighting wise, Kaz has plenty of magic to use, mainly themed around berry stuff or undead spells, which he prefers to use as he is a terrible up-close fighter. But if need be he has needles he uses to fight. Like acupuncture, he uses them to target pressure points to stop attackers. He may even use his berrying ability to swell up to take blows more readily.