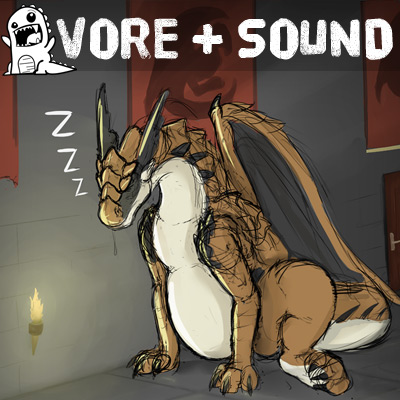 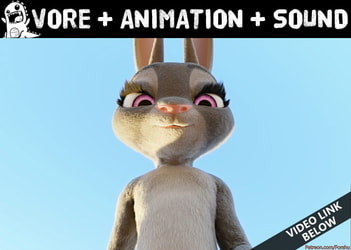 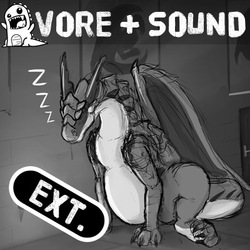 QUICK SUMMARY:
You are a party guest who was ejected from a dinner soiree earlier in the evening, who circles back to steal some loot from the estate as payback for the insult. You weren't expecting the Lord's guard-dragon to stand in your way, but they seem to be fast asleep, so hopefully the reward is worth the risk!

PREMISE:
While not exactly on the "invited" list, you're well aware of how open the evening soirees at Lord Streslbask's estate inevitably end up. The Imperial Lizard himself seems aware of this, offering an economically-sourced selection of cuisines in quantities accommodating of an unexpectedly large crowd. The open bar, however, catches your fancy the most. Not the wisest choice of refreshment considering the lingering summer heat outside, but you won’t pass the chance to indulge in some top-shelf liquor.

Wandering the dining hall after a few drinks past your usual limit (and they haven't even served the good food yet,) you run into the Lord of the estate himself, who by coincidence also seems to be well on his way through the forest of wanton inebriation. You were planning on a casual evening of wining and dining on the Lord's tab. You weren't, however, expecting to engage in a philosophical debate with the Lord himself on the merits of various farm implements and diminishing profit margins as capitalists run out of ways to extract value from labor, threatening the pace of the post-war rebuild.

Your tongue loosened well past the point of self-control, however, you find no reason to not argue with the pretentious lizard. Cordial at first, the slurred argument quickly escalates to a flipped table, and then a small scuffle, during which you somehow manage to set the fallen piece of furniture ablaze.

With just about all of the unspoken rules for the uninvited guests of the Lord's parties having now been broken, you are promptly ejected. Could have gone worse, you figure, but while you're probably already on the path to sobering up, you refuse to let this insult stand, deciding instead to pay a visit to one of the Lord's vault buildings to see if you can snag a few choice pieces as repayment.

Now within one of the estate's buildings, curiously labeled "Lesser Vaults," you tread extra softly through the wide halls, having shed your noisy sandals outside, while retaining the rest of your commoner’s attire. Your roguish senses well at play, you're quick to realize the interior of the building seems devoid of patrol or exceptional security. Unfortunately, it also seems devoid of valuables to swipe, with mounds of records and accounting paperwork being the primary asset stored in the various offices and shelves lining the walls. Things appear disappointing, at least until you descend one last spiral staircase and happen upon the final basement corridor.

A portly orange dragon guard, roughly twice your height to his shoulder, sleeps noisily in an alcove directly across from a closed door. You've spent so much time here, it would be a shame to leave empty-handed, and the fact that the room is "guarded" piques your interest. No reward worth plundering was ever without risk, after all. With that assessment settled, you advance carefully down the hall…

ANNOTATED TIMELINE:
0:00 – 0:33: You descend into the basement of one of the estate's storage vault buildings, empty-handed so far. A single locked door remains, but unlike the rest of the building, this one is guarded by a rather portly-looking orange dragon, although thankfully for you they seem to be fast asleep. You make short work of the lock, and carefully proceed inside, closing the door behind you.

0:34 – 1:11: You make short work of the room's valuables after a brief search, shoveling loose coin into your bag. In addition, a pricey-looking silver scepter adorns the top of a desk, likely a trinket of the Lord himself. You conceal the treasure in a separate pouch from the coinage, and make back for the hall.

1:12 – 1:48: After carefully exiting the room, you slowly pad down the hall, but the contents of your stuffed bag betrays your stealthy retreat, startling the dragon from his slumber and sending him after you in a furious pursuit up from the basement through the main floor of the vault building.

1:49 – 2:23: The dragon bounds over—possibly through even—many articles of furniture and décor as he makes a direct line to you, pouncing and tackling you to the ground. He holds you down under his heavy forepaws. With his adversary caught, he proceeds to empty most of your pockets and bag, piling the stolen coinage to the side, although through chance he seems to miss the silver scepter.

2:24 – 3:49: Changing focus, the dragon prods through your bags, looking for a snack. When none is found, he proceeds to work at engulfing your head instead after a brief tasting, followed quickly by the rest of your body which he quickly gulps down, condemning you to stew in his already-round underside.With you banished to his stomach, the dragon works to straighten up the mess he made, moving furniture about and shifting rugs around to help obfuscate the damage he made in the pursuit.

3:50 – 5:30: The Lord of the estate enters the scene, scolding the dragon guard for making such a mess. The dragon explains what happened and that he reclaimed the stolen items, although the Lord is hardly convinced—indeed the dragon did fail to confiscate the Lord's scepter from you, instead more worried about making a quick meal out of you instead. The Lord instructs the dragon to spit you back out in the alley beside the building.

5:31 – 6:20: The lizard smugly acknowledges his adversary from earlier in the evening, swiping his scepter back from you and instructing his guard-dragon to send you back to where you now belong, the dragon readily obliging.

6:21 – 7:45: Re-consumed again, you land in the dragon's stomach, which seems to have stepped up its activity during your brief absence. The dragon makes his way back inside and continues to shove some of the distended furniture, clearing a path at the order of the Lord.

7:46 – fin: The dragon, seemingly finished with his work, rolls over to resume his nap. While outwardly he rests, his insides begin to soak you through with stinging and sizzling fluids, speeding along your expiration after only a few painful minutes.