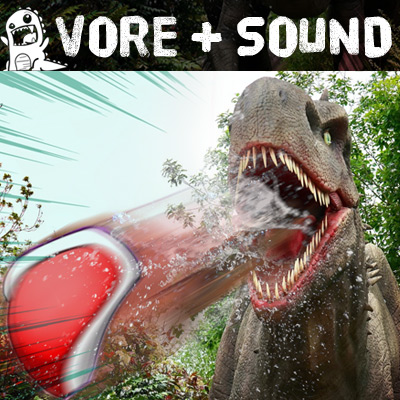 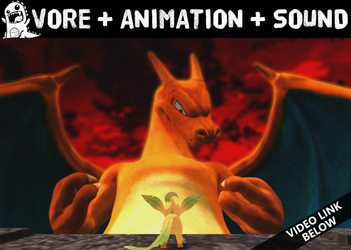 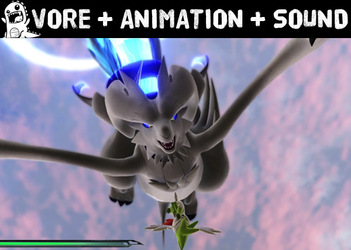 Melonball vs The T-Rex (Vore Audio)

Melonball, a fat purple yoshi, has an encounter with a very large Rex. This one isn't a POV, but we're following the action the whole time.

Commissioned by Lutro - https://www.furaffinity.net/user/lutro/
Sound by me

Also the text below was written up by Lutro:

0:00 Melonball, a fat purple yoshi, snags a ripe round fruit off a nearby tree for lunch. This is a dangerous environment, but it bares the best fruits and she couldn't resist!

0:08 A set of booming, encroaching footsteps catches the yoshi's attention! She can't help but stare in fright as a massive Tyrannosaurus Rex looms into view, its beady eyeing her chubby form as its swaying tail destroys nearby vegetation.

0:20 Melonball is frozen in place as a guttural rumbling from the T-Rex plainly indicates its hunger! A drool-laden growl and lick of scaly lips is all it takes for the yoshi to run for her life! The T-Rex lumbers almost lazily after its designated yoshi meal.

0:38 The T-Rex's jaws snatch Melonball around the base of her tail! A pleasured growl mumbles out those lips with the tongue sneaking a taste. The yoshi wails as she's callously tossed into the sky, T-Rex jaws hanging open to catch her fat flailing form.

0:45 Melonball is subjected to the thick, slimy tongue tasting as her chubby middle squashed against the tongue. The yoshi is left with her fat tail and rear dangling outside hungry T-Rex jaws. Her futile efforts can't do a thing to stop the dinosaur from enjoying her supple flavors, hot breaths wafting over her and drool coating every purple and white scale.

1:05 Panic rises in the yoshi as jaws close around her legs and tail, tongue cupping between her legs. When the powerful jaws hinge open the tongue ushers Melonball inward before sealing her in the hot wet darkness of a mouth.

1:20 Melonball wails as the T-Rex swallows, dragging her front half into the squelching dino throat. Her flabby yoshi belly and butt are lathered over by the hungry T-Rex, the dino getting one last thorough taste.

1:35 A final elongated gulp silences the squealing yoshi, swallowing her whole and alive! Her plump pear-shaped bulges stretch scales until sloshing into a now-swollen stomach. A loud belch punctuates the T-Rex's meal.

1:45 Meal secured, the T-Rex licks its lips as it marches forward to find a clear spot to rest. It lays down, decimating a tree in the process, and curls its tail against its swollen belly. The noisy stomach actively digests Melonball, bubbling groans saturating the devoured yoshi within. Melonball moans and protests among the stomach acids, but has little recourse in the pitch-black, rumbling stomach.

2:18 The fat yoshi wails one last time before she passes out among the gurgling fluids. A second belch rocks the clearing as a drool-and-acid-coated yoshi saddle splatters to the ground. The T-Rex licks its drool-covered lips one last time before settling down to sleep off its well-earned Melonball meal, stomach bulging outward and subtly gurgling away...