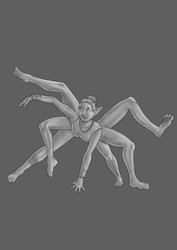 Lately, I started working on a new comic and a surprise that I I started uploading last week! Don't miss it out, it will be awesome! It will include Tf, Tg and Sw!;-)

One of the many problems when the SHAGA first appeared is that most of the first patients had no ideas of what was happening to them. Take Sharon for example. In less than a week, her red strait hair became white and whool like. And it was just a beginning! First, her body started growing a thin layer of fur that gradually becamed whool. After, her toes started fusing into hooves. All this time, she thought she was getting crazy and didn't want to get out of her appartment. She lost her job and have been found by her family that was worried about her not calling them back. It is true that she had a lot of trouble getting rid of her compulsion to bleat every two words or so...