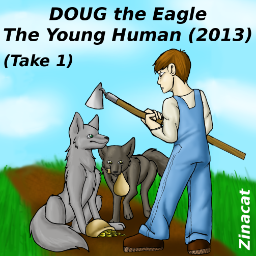 Last year I had writer's block until 'Incubi and Succubi' suddenly happened, and in that time I decided to revisit some of my older songs using the upgraded studio. 'Young Human' was an early one from my second album, "Songs for the Wild-at-heart", and I decided to redo it with better mellotron, more minimax, better microphone, a real bass and 24 tracks instead of 8. Since I have writer's block again, I decided to pick up from where I left off and finish this one.

Some of the sound effects, copicat echo loops and such have been copied over from the master tape of the original song. I might have copied the vocals as well, but the new version is in a different key (I may have used the wrong version of the MIDI file...?).

I think I may have used the original WAV file of the 'life-feel-see' sample at the end, I'm not sure.

The phasing effect was going to be done using my trusty Revox/Tascam pair but the latter one blew it's drive belt and I didn't have time to order a replacement before AC. I attempted to rig something with a vacuum cleaner belt but there was too much wow.

So instead I did this thing where I copied the vocals from my 8-track machine onto the 24-track, but this time I did it twice and wiggled the speed control on the second copy. It didn't work as well as a more traditional phasing technique but it did kind-of work, except for that time when I hit the power button on the master deck instead of the varispeed control (they're next to each other).

The bass could be better played and I might revise that in a future take.

Thumbnail by Zinacat, the cover of my second album "Songs for the Wild-at-heart" which had the original version of the song.

Critique would be desirable.