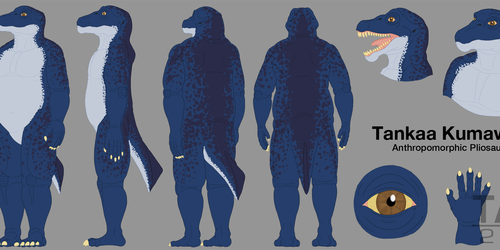 Ori was a rianth from a clade based off of a range of fantasy creatures from Old Earth films and roleplaying games. He was born in the city of Aquila. He fell in with a mercenary company during his college years, but resigned after a series of incidents over a year ago. Along with the former commander, he ended up taking on several missions via a Dimension Jump service and is currently on contract as an engineer with Nanotrasen aboard the NSS Exodus...after having his skin temporarily dyed to a more...canonical color.

Ori's career as one of my primaries is slightly longer than Tankaa's, but were it not for a high-powered Pathfinder campaign, he would have languished as a joke character and would have eventually been junked or forgotten. Instead, he became the amusingly durable battledrake everyone knows and loves. An elder brother to figure to Tankaa, Ori helps moderate some of the pliosaur's overplanning habits and immaturity.

Turnarounds are an effective yet time-consuming way of showing off a character in three dimensions. This took forever to ink, I have yet to start inking work on Tankaa's reference. At least this should be good for a year or two and might pave the way to a bit of cosplaying after I've contributed money towards my retirement fund, tuition, and reserves.

Revision (10/18/2014): Switched to round pupils after looking at monitors, tegus, sungazers, and Baragon, in addition to looking up a few things about chromatic aberration.