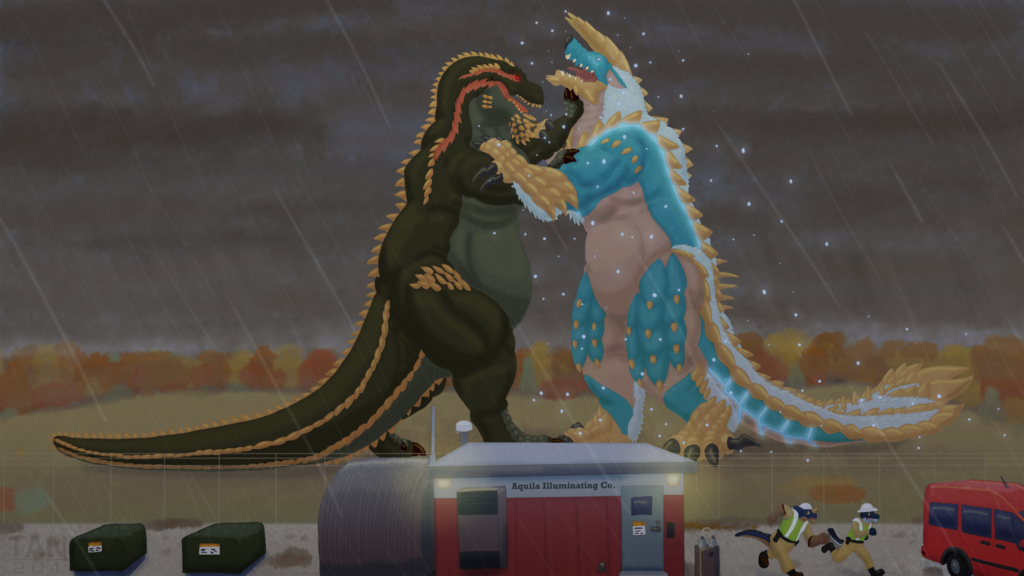 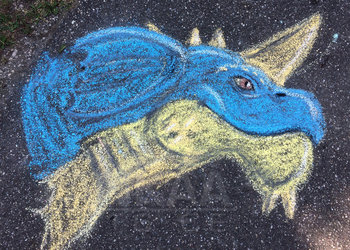 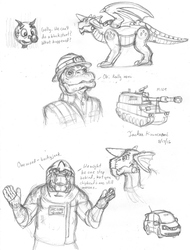 "Get to the van! We're not hanging around here!"
"We're going to die, then Dr. Aru is going to kill me!"

During a cold, yucky northeastern Scioto evening, the barrier of reality gave way near a substation on the far east end of Aquila Illuminating Company territory. Two behemoths, one a brutal nonavian theropod and the other some sort of fanged thunder wolf lizard clashed in battle. This incident was witnessed by several power company employees, two on the scene and several at the Mogadore Control Center dispatch office.

There were also reports of Type 10 tanks other Shinano Republic Ground Defense Force AFVs operating in the area, artillery bombardments, and a bombing run by SRADF F-2s shortly before reality reasserted itself, leaving only memories, a few downed transmission lines, and unusual SCADA fault logs behind.

"Those are SRGDF markings. Wait, isn't this a flagrant violation of Article 9?"
"Yeah, normally I'd tell you that 'it's just a show; I should really just relax', but keep pointing out logical inconsistencies. Maybe this will help keep us alive..."

This picture started as an idea based off of Zinogre's reaction to the Trainer's mention of Deviljho in the Felyne Village shorts. Since i had already started drawing a bipedal Zinogre, this seemed like the best way to handle the idea. I wonder if I'll get around to doing this for other monsters...

If I had decided to nix the foreground, we could have had the image in Cinemascope, but it's not important. I couldn't figure out how to fit the buswork, breakers, and overhead lines into the image without screwing up the framing, so all we have in the image are the control building and a pair of pad mounts used as station service transformers.

In order to not horribly disrupt the reality of Confessions of a Commissioning Engineer, this sort of event is probably similar to the effects described in The Gernsback Continuum by William Gibson.

Artwork © of me
Zinogre, Deviljho, Monster Hunter © of Capcom