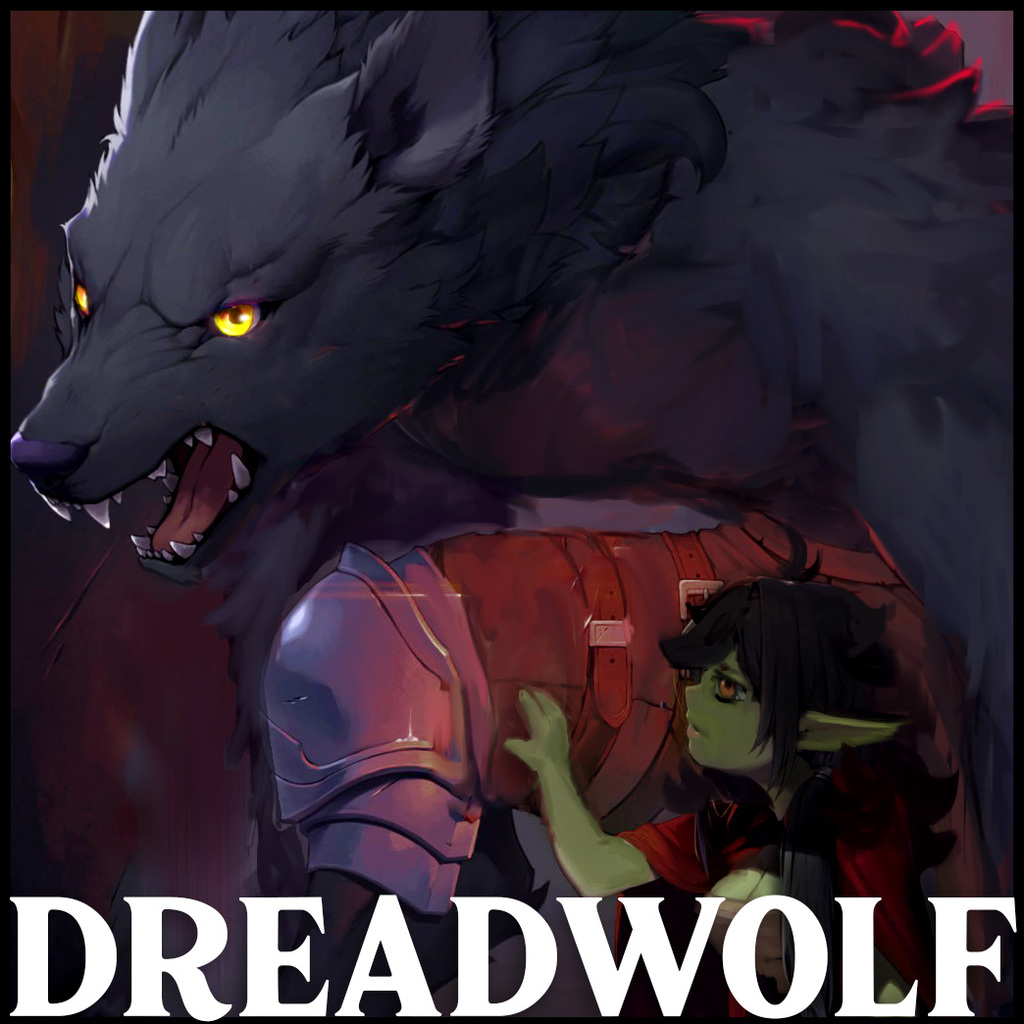 Opal cried out in frustration and threw her fishing rod on the ground.

“Maybe they just left, you said the fish were pretty smart,” murmured Rain, lazing against a rock with his paws behind his head and his eyes closed.

“I did kill and eat one of their own on the shore, that would scare anyone away for a long time.”

“Stupid nosey fish. Fine. Let's go fishing at the great lake. Maybe they went there or maybe there are other fishies in that lake to catch.”

Rain cracked an eye. “We can do that, but I want to make it a proper hunting trip. We’ll stay the night by the lake. Go and get a pair of tents and whatever else it is you need to put up camp.”

Opal glared at him but scampered off into the Goblin tribes camp. After a few minutes he heard her returning footsteps. He sighed and rolled to his feet.

A large rucksack sat on her shoulders with a number of cooking utensils hanging off the side with string. She shifted her shoulders making it comfortable.

“Well? The sooner we get to the lake the sooner you can eat, are you coming?”

He eyed the rucksack. It very clearly held one tent, not two.

Rain opened his mouth to say something, then paused as images of snuggling with the vulnerable Goblin last night came to mind. He slowly closed his mouth. He found he couldn't make himself protest her choice to his chagrin.

Shaking his head at his own softness he gestured for her to lead the way and he followed as they left the crystal cavern behind. They left different way than how he had originally entered, but probably for the best, he considered, if he had difficulty fitting through that tiny entrance before he certainly would not be able to fit now.

The Goblin took them through a maze of tunnels often lit by small crystals dotting the ceiling but often enough in darkness, or sometimes barely lit by some luminous moss or other foliage. For the most part it was deserted, apart from the occasional scuttling rat which Opal attempted to catch by throwing rocks. She missed without fail to her growing irritation and Rain’s growing amusement.

Eventually, they emerged from a jagged crack in the wall of the cavern that contained the great lake. It stretched before them for two kilometers and the vast purple and blue crystal formation hanging above glowed with light just as impressive as when he had first come across it.

He paused to take it in.

This is where I died… And was turned into a monster. I hope it was worth it Brax, Myra, Adlen, Eliza, Lira. I’m going to climb out of hell and kill you all.

“Anything wrong?” said Opal looking back at him.

“No. Just bad memories. Let’s find a good fishing spot. A rock or something that juts out into the lake.”

She nodded and the pair began wandering along the boulder-strewn lake edge in companionable silence. Every so often a blue shelled crab would scuttle from behind a boulder and Opal would exclaim and rush up to grab it and then carry it back to Rain. Rain would then kill it and snack on crab as they walked, crunching open shells and sucking down crab meat.

Rain paused from splitting open a shell and followed Opal’s pointing finger. A large form lay slumped on the lakeshore. At first he thought it was a bleached white tree trunk that had somehow been beached, it’s top side covered in glowing moss. But as they drew closer he realised that it was a monster, an unmoving monster. An absolutely huge white alligator. Glowing crystal nubs dotted its top side and its head was topped by a crown of jagged crystal which was ringed at the base with a worked gold circlet. Its eyes were white, blind. The pair stared at it slack-jawed.

“Think how much meat that is!” exclaimed Opal.

Opal moved closer and using a stick she poked at a leg. The alligator remained unmoving.

Rain moved closer, even lying on its stomach the top of the alligator must have been twice Rain’s height. Round eyed he placed a paw on its worn and scarred scales.

“How do you think it died?”

“I don’t know, old age maybe? It looks ancient, there's even small plants and mosses growing on it.”

Rain looked up to see that Opal had abandoned her rucksack and had climbed on top of the alligator and was walking its length with arms outstretched for balance. The thing was so long that half of its tail remained below the surface of the lake.

“So it just dropped dead now? After living for decades or centuries? After I…”

“What? Why does that matter?”

“You’re right it doesn't. I’m more surprised that you didn't know this thing was living in the lake. You didn't, right?”

“I had no idea this big monster was here. Although it’s possible it came from an underwater tunnel connected to somewhere else.” She shrugged. “I guess if stuff like this lives in the lake it explains why the witch didn’t like us going in the water.”

He walked around to its head and with difficulty climbed on top of its snout. On closer examination the circlet was definitely artificial although tarnished and worn. It had strange angular runes marked around its side. The lines of the runes looked like claw marks to his eyes, in fact he held up his own claws to the marks and could actually recognise the similarity. He gnawed on his lip and wondered what it could mean. What the witch Goblin had said worried him. Her spelled artefact hadn’t worked on him but who was to say him merging with the remains on the lake bed hadn’t been enough to simply confuse it and he really was the thing that the witch suspected.

“Hey! Are you going to take that or what?”

“I, I don’t trust it. It may be magical, maybe magically trapped. Besides, it’s fused pretty tight with the crystal, I’d have to break it to remove it.”

Opal gestured at the scales below her feet. “No need to if you’re going to eat the thing. Just eat all around that part.”

He pulled himself around the crown of crystal growing from the alligator’s head and stepped onto its back.

Rain rolled his eyes but dropped down and placed his teeth on the white scale.

He began to apply pressure. And then more pressure. Perturbed that nothing was happening he bit down as hard as he could. The scale remained intact.

He applied so much pressure that he felt like his teeth were going to break. He growled and stopped and then sat back rubbing his jaw.

“I can’t pierce it. It’s like trying to bite a stone.”

He slapped a paw down on the completely immovable scales.

“Shit. Well, let's try a different bit, maybe the side.”

She grabbed his paw and they slid over its flank and landed on the ground.

Rain placed his jaws on its side and bit but to no avail, the scale wasn’t even scratched. Opal, growing more frustrated dragged him to a foot and then when that failed dragged him around to its mouth.

“It’s simple, you open its mouth and then eat the soft fleshy bit inside.”

Rain placed both his paws on the top lip of the creature and heaved. The head remained immobile. He crouched down and examined it. It looked like it might open, but the gap between its teeth and lips was a perfect seal. He scowled and tried lifting it at different angles. Nothing worked, the head didn't even rock, It remained eerily motionless as though locked in place.

“What are you doing! Just open it already!”

“I can’t you dumb Goblin. I think… I think the alligator might be a lot heavier than it looks, it’s like how gold weighs more than it looks, like those coins we looted. It doesn't help that I’m trying to lift its entire skull too, it’s not like I can get at its lower jaw.”

He sighed and sat on the gator's snout.

“I’m not actually sure this is even flesh anymore. It’s almost like it petrified or crystalised when it died.” He scratched at the scales with his claws. It didn't leave a mark.

“It’s just too stone like, it probably is stone or as good as.”

Opal huffed and crossed her arms.

“I don’t think it’s likely to be scavenged by a monster any time soon if it makes you feel better.”

Opal looked a bit happier hearing this, although still grumpy.

She stopped speaking abruptly and tilted her head, her knife like ears directed down the shore. Then with her brow raised she put a finger to her lips and spoke to Rain in a whisper.

She gestured for him to follow and she rushed to pick up her rucksack before the both of them scuttled behind a large boulder. 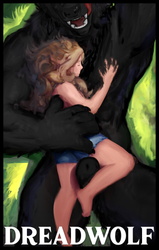 Thank you for reading 🙂

---
Monster power fantasy. Eat and become Stronger, Bigger, Dominant.
Rain is a survivor who got the short end of the stick in life. Reborn as a terrifying and dangerous monster everything changes and he has the chance to truly grow.