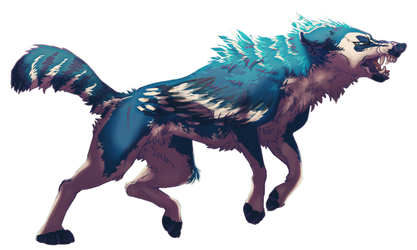 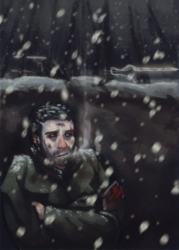 it is but a dated flower i bring to you

it is but a violet glistening with dew.

The land began to slope down steadily; a seagull glided overhead but did not call out, and as it moved towards the desecrated shoreline it carried the Prince's eye to a shape that lay, deflated, in the salt water flow. On an impulse too vague to name, the boy slowly drifted towards her across the thin beach, diligently stepping over shells and rocks, until he sat beside her without words. The smell of grey water and ash and cloud was an ugly but somehow cleansing smell that enveloped them both - the bitterness of loss, to a generation of destroyers.

"I have always wanted to see an ocean," He said, quietly, the rose vine slipping from his jaws to be cradled by white foamed waves that carried the flower to his paws and away in one breath of rhythm. He watched it sway on the ocean's skin, the only green for miles. The petals were like blood, bright against smokey water. "I don't know why. No beginning, no end - but there must be land over that horizon." It felt good to speak - he hadn't spoken in years, it felt - even if he spoke to no one but the sea.

They sat in the city at the edge of forever, looking at what felt like the end of all things they'd ever known - two forlorn and weary travelers leaning out just before the lip of the world, contemplating not whether to jump, but rather, how did I get here? Like it was some kind of equation that could be solved in loops of formula, coding that made sense, instead of the messy abstractions that flooded in when empire's walls fell down and all the things with no purpose roared up and murdered coherency.

There was no logic in being here. It was hard to cope with the idea of things that no longer were, and Ajax was as a newborn child, although he turned his back on that idea trying to be strong without guidance.

And while they both wished for someone else, for faces they might never see again, faces they'd both disappointed in some way or another, it was not strange for them to have found eachother's company in the first place.