Acquisitions - Part I - Proposition by Sofia.exe 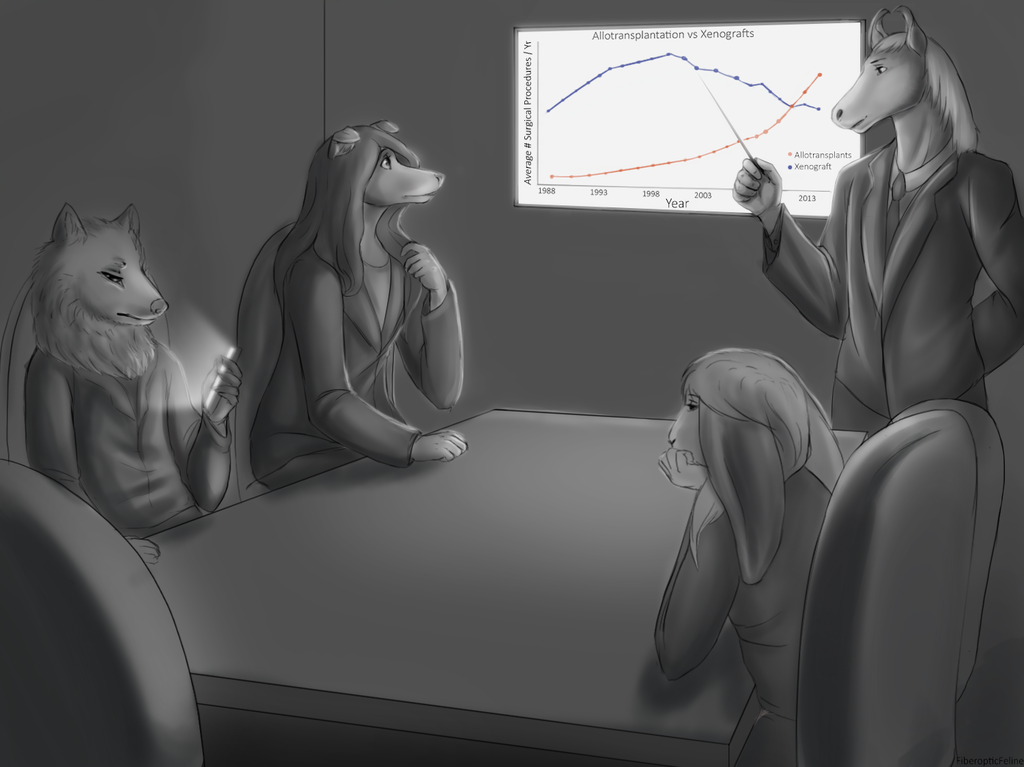 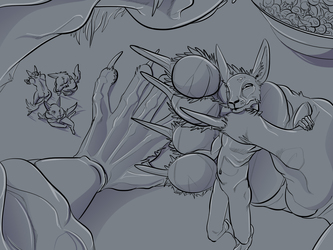 It had only been four months since the mantle of project manager was passed onto me. It has been elucidating to step out of the narrow confines of my role as a lab technician and into a brand new set of restrictive responsibilities as project manager. Jhal left me a pittance of a budget, and a fistful of underlings to attend to the slew of projects he left incomplete, but those are sorted out easily enough. We can still function. But functionality is the bare minimum. I didn't spend the better part of the last decade pulling crystals out of macerated ooze to be content merely functioning. We will not persist as a thin slice of muscle in the working arm of ZakuraTech. We will grow and expand into new areas besides protein crystallography. I have ideas for this group. Ideas I don’t intend to let die on paper, strangled by budgetary concerns and choked out at the proposal stage. But my plans are going to require resources to be fully realized. Which I suppose is what brought me out of the lab to this prim and proper suit and dress dance. Caught just on the slimy skim of my spam folder was an invitation to a presentation in downtown Denver. A quintuplet of talks from internal speakers. Big shots with money and successful projects who had something to say. Probably requests for more manpower or laboratory space. I am no stranger to collaboration (after all, it was what got me this position), and you can’t beat free when it comes to shared lab space. I RSVP’d and squeezed into my red-blazer. The nice one.

I loathe office spaces though. I forgot how much I hate their cluttered designs and utter lack of privacy. It transforms the people who work there. They aren’t business oriented at all. They become lazy and more frustratingly, chatty. They want to tell you about their day and pretend to want to know about yours. People hide their expressions behind noncommittal plastic smiles. The stink of makeup and joint medication intermingles with the petulant undertones of over-applied air-freshener. A dusty smell of carpets perpetuates across an aromatic landscape of takeout and day-old coffee. I could feel my muzzle wrinkling under the strain of all the allergens after the first hour. The first two talks were dreadful. All polymer stuff. Functionalized polystyrene stuffed full of buzzwords. Low melting point high tensile ultra-flexible yadda-yadda. I’ve seen the polydispersity on that work before. There’s a reason the speaker wasn't showing any real data. I missed the third meeting I wanted to attend on account of it being on the far side of the office beyond a swath of evening-abandoned cubicles. Little empty boxes, whose do-nothing no-body residents had departed at the shallow tick-click of 4:30pm. Shameful. No wonder office workers never get anything done. I stole into a lounge on my way back to the main meeting room and prepared myself some coffee. It left a chalky-stale taste in my mouth, much like this whole affair.

I contemplated skipping the last meeting when I stepped into the cramped, cloistered glass walled office and saw a mere trio of people staring back at me. Their faces were painted various shades of disinterest and 8:00pm tired. But I was already a whole foot into the bear trap of social convention and it would be awkward to step out now. I recognized the fox beside me as an employee from another lab and made as if to make conversation, but he could not be bothered to look up from his phone. Black-leather paw tips lazily glided along, sputtering some gibberish in text speak that I could not be bothered to decipher. How he could stand to stare at a screen that bright in a room so dark was beyond me. Across from me sat a brown lapine chipperly talking with whom I presume was the speaker. He was a lithe, tall horse of some kind. He wore his ebony toned fur well under an auburn-brown suit jacket. It was hard to tell if the dusting of snow-white fur along his muzzle was the consequence of age or natural colouration. I would have guessed an Arabian save for the devilish curved tuck of his ears and he spoke with the slow deliberation and sharp English snap of an Indian accent. I reappraised my assumption to include a Marawari. His light build seemed to confirm it and I was secretly proud of my guess. His presentation read “Dr. William Ajit Hayes,”. The talk was listed under ‘biomedical applications’ but the title slide made the bold promise of “Dynamic Approaches to Stratified Epithelial Growth,”. I was ready to be impressed.

It took a few moments for Hayes to detect that I was the last one coming. I saw a flash of annoyance bend a furrow across his brow, before his expression melted into the familiar, rehearsed grin of a presenter with something to say. He welcomed us and apologized for the late timing. He cautioned us against some of the graphic nature of the images in the slide show, (the lunch meeting group had not appreciated them, it seems). It caught my attention and even made the fox beside me look up for a moment before returning to the silent conversation with the box in in hands. Hayes continued undeterred – sweeping into a trio of slides regarding the statistical distribution of burn victims. While open flames had the propensity to the most total surface area damage to morphs, (on account of the flammability of fur) – they usually were only 1st or 2nd degree injuries. Far more serious were exposures to hot liquids. Fur has a propensity for soaking up hot greases and water alike – increasing the total time of an exposure. Serious injuries would often result even from minimal surface contact because many morphs simply could not get the hot substance off. It stuck to fur. It slipped under scales. Steam percolated and condensed to form piping hot droplets. It made the flesh spongy and sticky like tar. He showed a comparative duo of burns and I could hear the lapine at far end of the table gasp under her breath. I however was enthralled. It was such a dramatic difference. We routinely used oil baths in the laboratory. I had never once considered the fact that they were more hazardous to me than my own cigarettes. I suppose good technique and a barrier (by way of glove and labcoat) made all the difference between accident and disaster. The upper slides had great swaths of bare, sore, pinkish flesh devoid of fur. In some cases little blisters could be seen – swollen with interstitial fluid. But the lower ones. Oh my. There was pink, inflamed meat on open display with great pockets of fluid filled pustules ballooning outward. In some cases the fur had to be shaved away to allow the conjoined masses space to [i]breathe[/i]. They were tender and ripe with liquid. A grease splash across some poor ursine morphs arm and hand showed extensive damage around the phalanges and knuckles. Wrinkled, gray-creases of coiled up flesh that had pulled free from the surface into crispy tufts around the joints. It revealed the wet, oily red and orange tissue beneath, stained by the heat of the frothing grease. The whole hand was fixed in a clenched curl. Immobilized by the pain of air exposure. Charry-black and brown-residue of dehydrated flesh tugged itself away from discoloured yellow fat that had bubbled and oozed loose of its respective domain. I swear I could smell the gritty stink of denatured, blackened skin and greasy fat just from looking at it.

Hayes went on to explain this kind of damage was common to acid throwing incidents in his native India as well as several middle-eastern countries. Another gallery of deformities displayed this fact, as if anyone in attendance had any doubts. Dehydration and heat; a consequence of strong mineral acid exposure to unprotected flesh. It left patches of furless, stretched looking skin splattered across victims faces and chests. In some cases skin around joints had fused together entirely – having to be cut and stitched shut again to restore functionality. In many cases victims were left compromised and vulnerable to persistent infection. His tone wavered a moment, as he recounted that this was the fate of his own daughter – who had gotten doused along her side by an envious competitor on the way home from work. Sulfuric acid, from a bathroom cleaning kit, poured into a bucket of water until the mixture was boiling hot. When they had peeled her sari off her, most of the skin along her side had come off with it. The internal damage associated with sucking in acidic vapours had been similarly hideous. The incident had become a motivation for his research – which was the growth of and surgical installation of replacement skin for victims similar to his daughter.

Difficulties faced by those with extensive skin damage were myriad. Often large surface areas were affected – making sterile removal and transplantation of the patients own skin (a common method of treatment) inadequate. Often the skin was damaged so severely that the entire epidermis in some areas had to be replaced; increasing the propensity for complication and rejection. Most frustrating was a trend of most hospitals shifting away from allotransplantation – which involved use of same or similar species tissue, towards xenografts. The cause was obvious, of course; there simply weren't any donors around (not even cadavers) to acquire tissue from. The odds of finding a similar species to your own on a hospital donor list were decreasing every day. Hospitals were shifting to a technique of mix and match – use whatever you had on hand and tell the patient to swallow a fistful of immunosuppressants. Duct-tape may well be more effective at that point.

The next slide finally revealed some biochemistry, but by then I was the only one who seemed to be paying attention. The hare was looking aware from the slide show apprehensively, making glances to the door. Her queasy, nervous expression made me wonder if she was going to be ill, but Hayes’ talk was drawing the bulk of my attention. He proposed using a slew of tissue culture techniques to grow a patients own skin on agar. That was an eye brow raising proposition. He wasn’t going through the stem-cell bullshit I was expecting. That was controversial and flip-floppy in practice. What he was proposing was absurd and fraught with potential problems. Grow one layer of tissue then the next on top of it. Assemble it all together with enzymatic glue and then slap it on your patient. I liked it. It was the right sort of crazy. The kind of madness you could attack from a slew of different angles. It wasn't one project – it was several. More importantly it wasn't another god damn crystal.

At the end he got a hearty round of applause from my side of the table. By the time he finished asking if anyone had questions our rabbit friend had excused herself. The fox looked up with a squint at the acknowledgement slides. I watched him squint at the sponsors, hovering there a moment before shrugging and lowering his muzzle back down to his glittering hand-brick. I pondered raising my hand, but opted instead for a more direct proposition by standing and sticking out my hand.

“Dr. Hayes? My name is Sofia Fluttertail – and it seems you’re in the market for tissue culturists..”