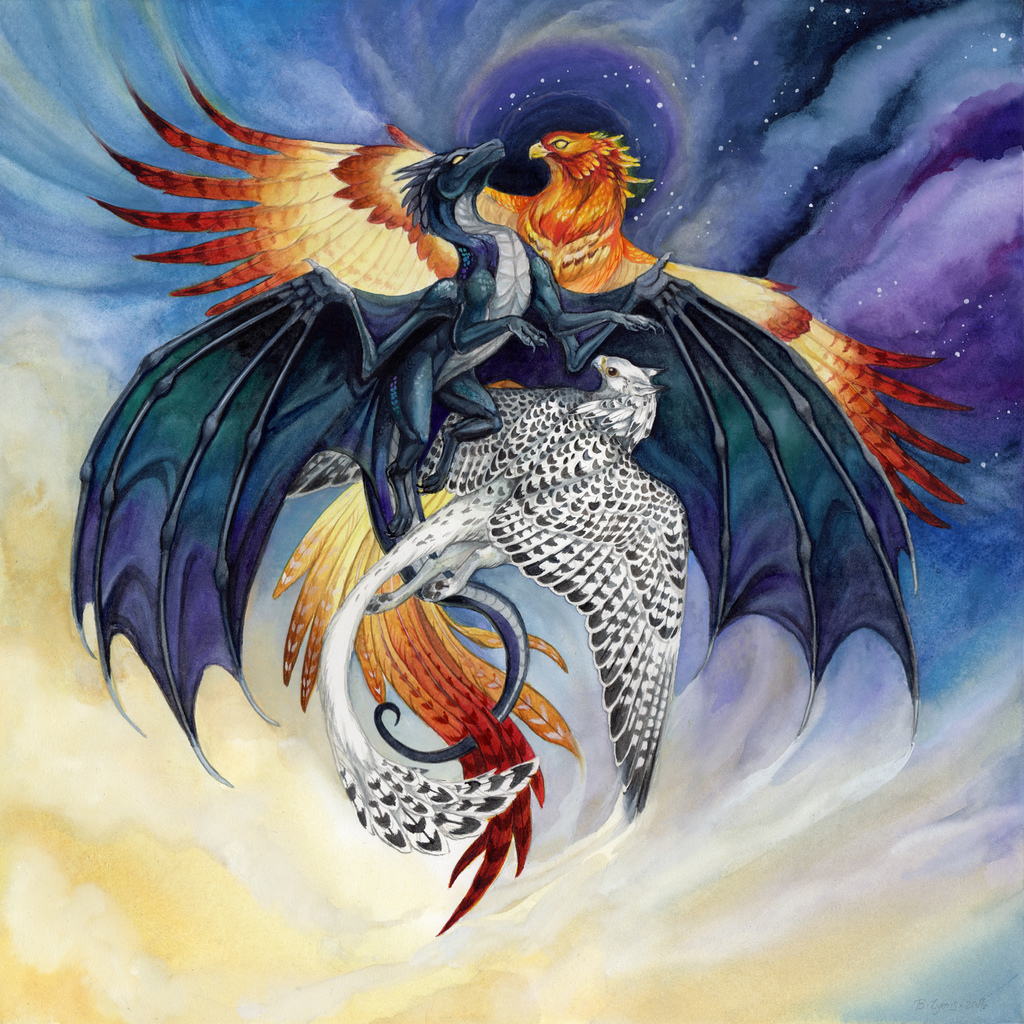 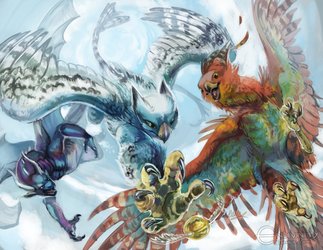 My phoenix, dragon and gryphon selves, all rising up intertwined in unison.

For a long, long time I had been envisioning commissioning an epic artpiece that included my three beasts - my phoenix, gryphon and dragon. These three creatures hold very deep personal meaning to me, and their visual representations express different aspects of my life and personal spirituality, cosmology.

The gryphon is a manifestation of my outwardly creativity, action and interaction. It originated one evening at camp feral when I drew together several disparate desires and ideas and decided to build a winged avian costume. It had to be white for simplicity; thus the gyrfalcon lupogryph Sora came into being. As over the months it evolved and got involved in all kinds of things all over the place, it took on a life of its own as Sora and a place in my personal mythos as the representative of my external and outwardly expression, of action, interaction, and creativity. My gryphon self is spontaneous and foolhardy, sometimes a little derpish though it tries to project aloof awesomeness. Socializing, enjoyment, and creativity are its domains.

The dragon is a visual self-representation of my mind. Since childhood, upon learning of my heritage as a zodiac dragon and receiving an impression from books and movies that people could be dragons too, this has been my personal self-image. I suppose you could call it therianthropy or otherkin if you want; as a dragon in those communities, I have been known as Orca. My dragon self is the disciplined, thoughtful, silent aspect. It is the keeper of stories, the creature behind writings in my journal, and graceful and deliberate in its actions. Reflection and wisdom are its domains.

The phoenix is the self-representation of my heart and soul. I am not prepared to tell its story yet, but along the way. My phoenix self bears my deepest emotions and dreams, and my reason to live. It is the yearning in my chest and gravity in my heart that pulls me onward in life, that rides the music of the splendour and travail of the world and gives me meaning to carry on no matter what happens. It's me at the most fundamental level as a dreamer.

These three aspects of myself dance in unison through space and time. The phoenix dreams and provides energy, living force. The dragon plans, channels the energy, and protects. The gryphon acts and experiences, the outward expression of that energy to the world. All three are equally important to me.

I'd wanted a piece like this done for a while, but had no idea how to execute it. I saved up a good chunk for it and wanted to put it in the hands of someone capable of the artistry and finesse required. So I was overjoyed and grateful that Windfalcon agreed to lend her tremendous and wonderful skills and powers to weaving the magic of this piece together. Her idea sketches were amazing and this became only the first of a three-part series, but also the one I was most excited to see.

I eagerly anticipate commissioning her for the other two once, again, I save up enough.

Windfalcon, commissioned online May 2016, delivered at Anthrocon 2016. Pencil and watercolour.

Note: Old friends might notice all of the "character" names used for the three creatures have been my names in many different and significant contexts at one point or other in the past and present. I would prefer not to name and define the creatures portrayed as they are fundamental aspects of myself, but I must comply with how the community best operates; distinct creatures must be named to be claimed and protected as "characters" or "fursonas". Very well, I declare them copyrighted and mine from the early days of my adventures on the internet. But these are not artifices to be bought and sold, copied or played or traded. That would be very disconcerting. All of them are simply me.