A Call to Adventure: Skirmish and Ruse by SiriusDF 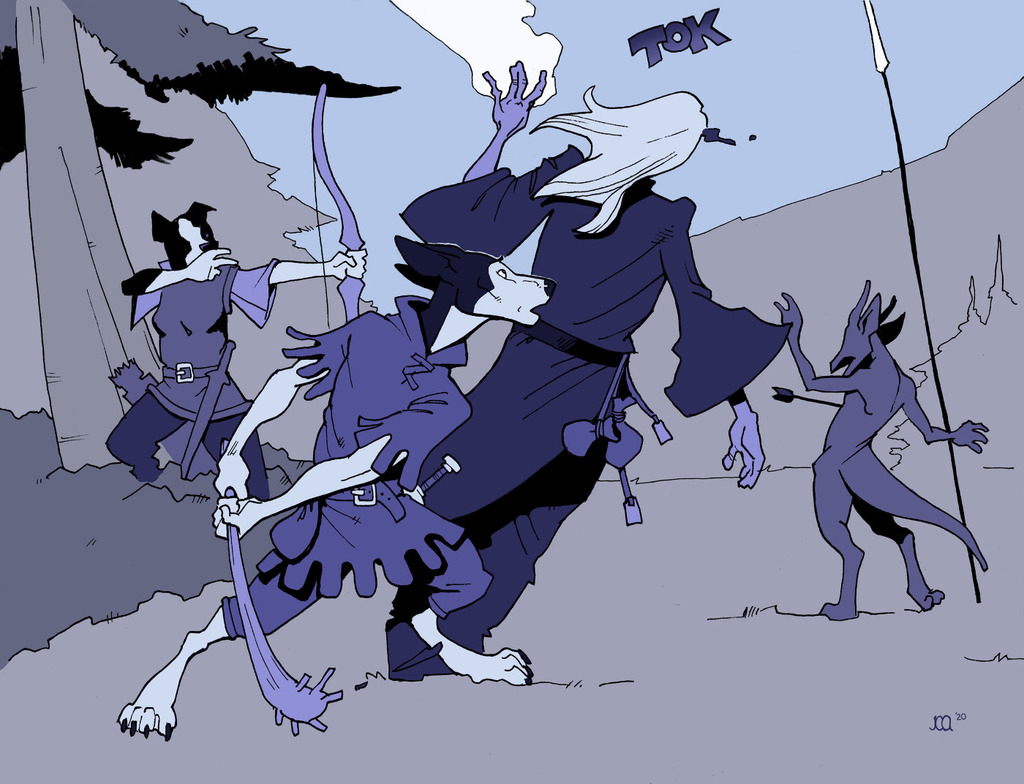 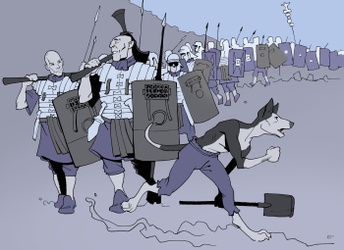 A Call to Adventure: Skirmish and Ruse

Accompanying short tale by me. Part 11 of the Call to Adventure Series

This episode, The armies of Argentium and Ft. Renton gather on the lower part of the valley leading to Neima pass. And await engagement with the Witch King's army sequestered further up the valley.

A Call to Adventure: Skirmish and Ruse.

The valley leading to Neima pass broadens as it faces East upon the forested plain. The ground to either side of that mountain tributary is grassy, bush strewn and graveled floodplain, easily traversed. A few leagues upstream, the valley narrows to a cleft, like an open gate of a vast Keep. The rear guard army of Witch King took advantage of the terrain to sequester forces upstream and behind the cleft.

Dawn lit the still snowy Darwin peaks aglow. The sky above promised clear weather with high winds blowing westwards. Two armies gathered on either side of the spring swollen tributary. On the valley's north slope, stood the army of Ft. Renton, reinforced with additional troops from Argentium. Argentium's army occupied the south slope. Couriers ran back and forth whispering orders to the captains. And on their commands, we organized to march.

Across the stream and in the distance, I spotted the cynophalite Optio to Argentium's commander. Next to the tall, wolfish eared canid was another, the distinctive bob tailed and tri-colored Sasilia. Wielding a mace instead of a gladius. For the first time, she was wearing chain mail instead of her tribal leather clothing. I suspect the Optio had firmly ordered her to wear it. Skimpy female clothing is not magic against swords.

By another group, a full head and shoulders above, stood the merle and speckle faced Sadie in imposing paladin armor of the Order of Reprobus. She aimed her snout in my direction. A brief nod from the cynophalite who was my foster sister from that brief time long ago.

There was no sign of the black and white Ranger called Shiloh. Likely she was out in the forest beyond the valley with cynophalite cohorts from both Argentium and Ft. Renton.

A low horn with a distinctive set of notes gave the signal. Per previous orders, instead of marching in dual formation upon the broad floodplain, we drew away from the stream and began climbing up the valley slopes. At midway between floor and ridge line, we started a horizontal traverse through fir tree clad slopes towards the cleft. At a quarter league before the great cleft, we deployed into various lines, shield to shield, upon the slopes, roughly midway up to the ridges. Our orders to stay put and avoid going down into the valley floor. Short lines that could be organized into hedgehogs if need be. Archers behind. Upon the higher reaches of the valley, dwarf mages scanned ahead.

Now in position, we waited.

Through the cleft, lit by early morning light, flashes of bright brass could be seen. From the helmets of the Witch King Army. More troops lay behind the cleft. Unseen. Along with, it was rumored, mercenary Calvary.

While our armies were organizing into position within the valley that led towards the Dead City; down in the forested plain, skirmishes had already begun.

The Witch king's scouts were guarding the route from his river anchorage to the valley. Hastily made trails starting from empty barges anchored aground along the shores of the river Saswatch and running parallel to the tributary leading to the valley mouth.

Despite the reputed arsenal of fire bolts and other offensive magic, the embued mages proved to be inexperienced in the art of basic soldiery. In particular, close combat and the need to stay alert in hostile surroundings. Most had no helmets or even a simple leather armor vest, relying on their overworked, and often unarmored, Kobold cohorts to protect them.

The cynaphalites noted the enemy's weakness, knotted a strategy and began decimating the Witch King's scouts. A canid pair would stalk, close in and launch a coordinated attack. A well placed arrow into a Kobold's chest and a killing head strike felling the easily distracted mage from behind.

Raven messengers, sent by the Cynaphalites, flew upstream to the valley to report that examination of the bags carried by the dead mages showed most of the embuements were drained of their mana.

The news was received with much debate. Evidently, the Witch King could no longer provide Mana resources to his scouting patrols. Could this be the case for the rear guard army? Or was this a ruse to fool us?