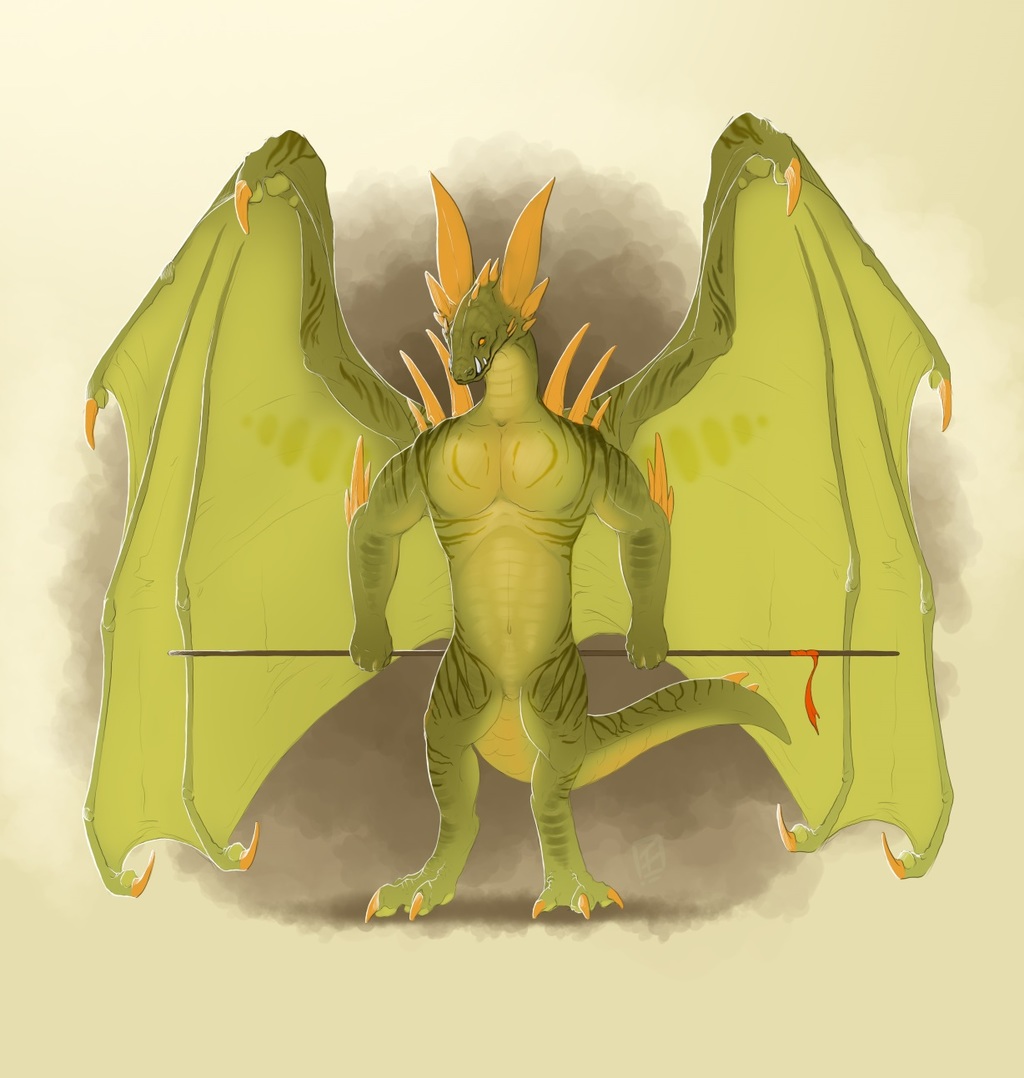 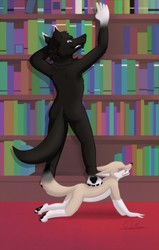 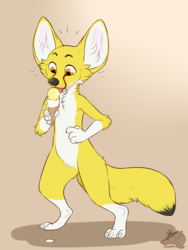 Standing almost two and a half meters high, Pollux is a huge and strong dragon and a true prime example of his kind. He has a tall and slim body and is very muscular. His long and slender neck and head have a reptilian look and bear resemblance to a snake. Pollux' chest is buff and strong, his stomach is likewise muscled, but rather flat without showing abs, thus making him appear more sleek and light. He has strong shoulders and his arms are visibly buff and extreme powerful, just like his large hands. His legs are long and very powerful to help him to lift off the ground. His big, three-toed feet have large, yellow claws for a good grip while landing and in combat. Pollux' tail is long, slim and aside from helping him to keep balance on the ground, also serves him as stabilizer and rudder during flight. As a real dragon, Pollux has a pair of sizeable wings that enable him to fly. His wingspan amounts to over six meters, and they make up about twenty percent of his body mass. They are extremely strong and anatomically resemble a second pair of arms with upper and lower arm and fingers. At the end of his wing bones, he has long, crooked claws that are versatile to allow him to land even on steep slopes. They can also be used to hold onto an opponent during a battle. The fine bones in his flying membrane may look fragile, though they are extremely flexible and not easy to break, yet they still provide enough support to stretch his wings. This comes in handy during dangerous flight maneuvers or in fierce battles. The flying membrane itself is rather stretchy, but also thick and resilient. To the touch, the flying membrane is quite warm. This comes due to the fact that dragons can use the membrane to regulate their body temperature. If, under a lot of physical strain, the body becomes too hot, warm blood will flow into the membrane and emit its heat to the surrounding air, thus cooling the body. This also works the other way around. If the body becomes too cold, less warm blood will be pumped into the wings to keep the body warm. Also noteworthy is that dragons have a palpably higher body temperature in general, compared to most other species. While on the ground, the wings can be folded together to save space and to gain mobility.

Pollux' skin is green all over. His head, wings, back, arms, legs and the upper side of his tail is a darker nuance, and adorned with an even darker, branched pattern. His throat, chest, stomach, groin, the underside of his tail and his palms and soles are of a much brighter green color and lack the branched pattern, safe for his chest. The flying membrane is a strong, bright green on the inside and a bit darker on the outside. The predominantly green color gives him an advantage at disguising in forested terrain. A dragon's skin feels scaly and smooth and is quite warm and rather hard and rigid to the touch. The skin is thick and provides excellent defense to a number of threats. For example, a regular blade would have a hard time cutting or penetrating a dragon's skin without tremendous effort. Dragon skin furthermore provides a certain measure of resistance towards fire. A small flame or an attack with fire can usually be fend off without receiving serious injuries. Only at longer exposure or very high temperatures will the skin take damage.

Two big, yellow horns are enthroned on top of Pollux' head. They are surrounded by several smaller thorns. A row of such thorns run down over his head, neck and parts of his back. He does not have external ears, but rather a set of different hearing organs that lay hidden and protected below his thorns. Pollux' piercing, yellow eyes are relatively small, but sharp nonetheless, and positioned strategically on both sides of his skull, allowing him to look straight ahead as well as granting him a wide peripheral view. He has a long, reptilian maw with a keen nose. His white teeth are long and sharp, and a set of two especially long fangs protrude from his lower jaw at both sides of his mouth, making him look grim and dangerous. His tongue is very long, slim, pointy, slick and flexible. The insides of his maw have a fleshy red color. His shoulders and elbows are equipped with long and very sturdy thorns. They can serve as weapon as well as a means of defense. The thorns on his shoulders furthermore protect his neck against attacks from behind, while still providing enough room for him to move his head and arms and to beat his wings.

Pollux has a very strong and distinctive personality. He is self-confident, independent and bold. His rough look fits his inner self quite well, since he usually behaves rude, intimidating and distant. Despite his crude appearance, however, Pollux is a thinker and actually very intelligent. He is a calculating character and there's a reason behind almost everything he does. He is smart and sly, a good judge of character, and not easily tricked. In battle he is an excellent strategist and leaves nothing to chance. Usually, Pollux appears calm, reserved and stoic, yet still authoritative, watchful and imposing. At times he can seem even uninterested in his surroundings, though he would never let his guard down! Emotionally, Pollux usually appears callously and detached, sometimes also irate or irritated. Feelings like fear or sadness are a sign of weakness to him, and therefore he'd never let such emotions show. But also happiness is a state you most certainly won't see him in. To him it's just no adequate behavior for a dragon of his age and status. Upon success, however, he will feel triumphant, even though he really is not one to brag about his many victories. Irrelevances can easily annoy him and he likely won't listen to anything he has no personal interest in. Pollux is a proud warrior and cares for himself first and foremost. Other people don't concern him, at least not unless they interfere with his own intentions. Despite the fact that the fate of others is indifferent to him, and that he most certainly wouldn't interact to help or support them at his cost, he is a rather righteous man with moral and principles, who would not attack those inferior to him without good reason. He has a strong sense for honor, discipline and justice, even though he does not feel the need to enforce it on others. Pollux is a very proud dragon! He is proud of his people, his culture, his heritage as dragon and of his long and hard-earned skills and experience as a fighter. He would never shun a fight or a chance to prove his strength, though due to his advanced age and expertise he has enough foresight to know when it's best to play it safe or when to stick to a plan rather than to charge right into battle heedlessly. Furthermore, Pollux is a person who demands respect! The only thing worse to him than being physically weak, is being disrespectful. If you approach him with the due respect, he is likely to treat you equally respectful, or at least he'll not ignore you completely. If you dare to misbehave in his presence, however, he is more than happy to show you your proper place. He actually takes great joy in pushing rebellious, arrogant brats into the dirt and teaching them some manners. He's also not afraid to leave behind some bruises if he has to. Most of the time, however, his appearance speaks for itself and loudmouths quickly wove out of his way. Strength and power are important to him, in mind as well as the body. If a person is strong in his eyes, he will approach this person with respect, though he would avoid to subordinate himself to anyone at all cost. Physically weak people are not necessarily unworthy to him, but he neither appreciates them and their wisdom, influence or opinion very much. This opinion corresponds mostly with the dragon culture he descends from, where weak individuals are not actually outcast, but neither really appreciated either. Dragons have always been a people who acknowledge strength and power before anything else. In their eyes an individual hast to be able to defend itself before obtaining maturity and thus the right to be taken seriously. Individuals that don't meet those criteria are seen as infantile. They neither are a help, nor a treat to them and thus to be ignored. To put it in a nutshell: If you were to stand in front of Pollux, and you are nowhere near a match to him in a physical way, he would see you as nothing more than a child, even though you are a fully grown adult. This is also part of the reason why he wouldn't attack weak people without cause, since harming children is a highly dishonorable act in dragon culture. And Pollux is someone who appreciates his culture's values and traditions.

The most obvious of his abilities is his ability to fly. He is able to take off right from the ground, however he prefers to start off of higher places like hills or cliffs to quickly gain speed and to save energy. Also notable is his vast experience in battle. He's fought many fights and learned a lot of techniques, tricks and strategies. He is versed with numerous weapons, but also in hand-to-hand combat. His body is a weapon of itself and he knows how to use it! The staff he always carries with him is made of extremely hard wood and serves him as light weapon against weak opponents and to defend himself. He likes using it, since it is light, fast and has a long reach. It also won't kill his opponent right away, if Pollux only desires to teach him a lesson. For serious battle, though, the staff is impractical. It would simply break under the enormous force it would be exposed to. In such situations he prefers to use a sword, though he is fully able to wield just about every weapon he gets ahold of. As a real dragon he is furthermore able to spit fire. A regular flame reaches about two to three meters wide, though at full tilt the flame can be brought to a length of five to ten meters. These dimensions are pretty respectable for a dragon of his size, age and experience. The number of times a dragon can spit fire successively without a longer pause for regeneration is limited, and depends on the size of the flame. The exact anatomy and functionality of a dragon's ability to spit fire is mostly unknown beyond this.

This amazing work was an adoptable from TaimaTala that I grabbed. I am really delighted to include such an awesome and impressive character into my cast! When I first saw him, I just had to have him, and eventually I was able to call him mine. I strongly encourage you to check out TaimaTala's page and all the other amazing things she draws!