Mr. Vile sure did lose some weight. by Sapphire Crook (critique requested) 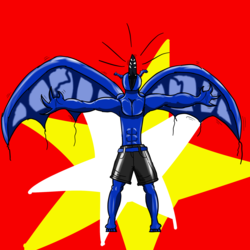 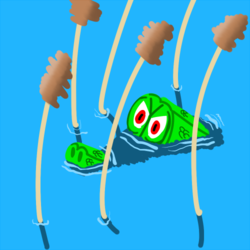 Mr. Vile sure did lose some weight. (critique requested)

After losing in BK, he started to hunt, to become the ultimate game master.
His prey? That darned mole and those speedy shoes!
Nobody can beat him once he gets his hands on those! >:D

Fun fact: that's (as Croc Banjo) the only time Banjo can wear the Turbo Trainers. Truly a life-enriching factoid!

Technical Hooha:
I tried to do something without outlines (other than a structural sketch). It worked out well, and while it doesn't look good on a fidelity level ,I think he loves cuddly and adorable! Should've given him those banjo shorts, because he found them unsavoury to eat. Heck, should've given him those turbo trainers in that case! XD
It IS heavily based on a reference, the following in particular: http://paleblank.deviantart.com/art/Croco-doco-diles-412552882
It's not a straight copy, and nothing is traced, which I feel is the most important part right now. Heck, references are a great way to learn some basics IF you think about why and how!

Problems:
Shading is inconsistent, his rear leg looks a bit funny, he's too skinny compared to the 'real' Mr. Vile, but hey ,I like it. I wanted to do something simple and swift, and in that case, I can only smile!