All in a Day's Work - Part 1 by RebelDragon 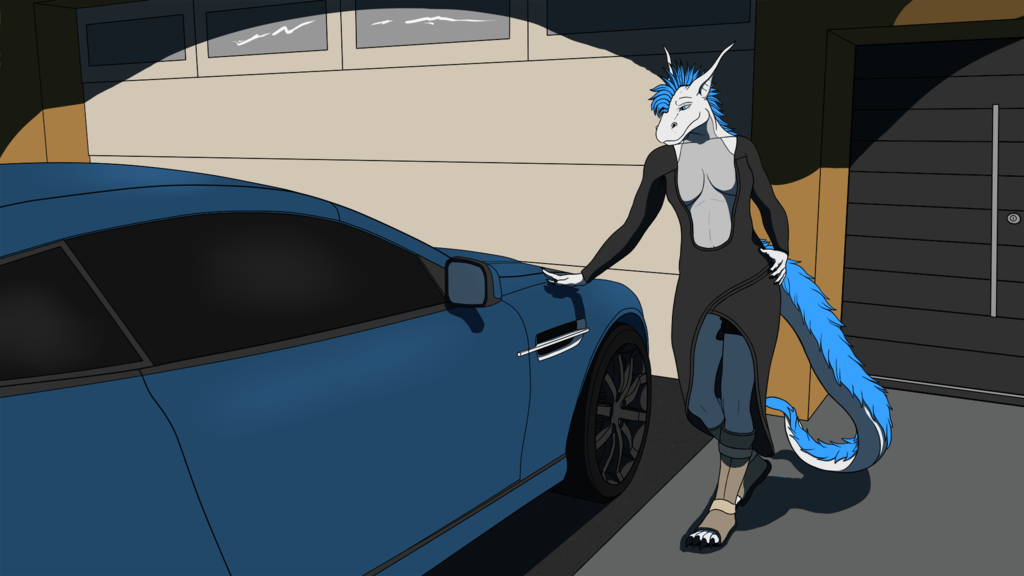 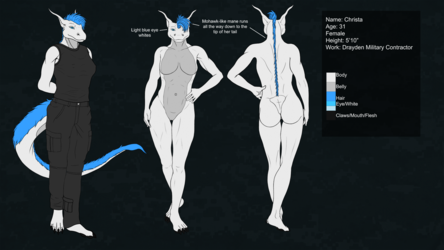 Clinking champagne flutes, the upper class murmured through conversation with politely averted eyes, pretending not to see the crux of the matter before them. A chandelier – crystal, nothing less – hung from the ceiling, sparkling as if it contained the fire of a thousand torches, all sparked up at once so that their light stretched into even the darkest of corners. It was one of those dark corners, shadowed by a fold of delicate curtain over a window that spanned from floor to high, high up ceiling, where a certain dragon was found, garbed in a sleek evening dress that showed off her voluptuous cleavage.

Ah yes, Chris was a dragoness with assets indeed.

Standing tall, her black dress fell down to her hind paws, encased in heels that were high enough to merge into the crowd and slip-on so she could kick them off in a hurry. The shoes matched the tenor of the dress, encrusted with black diamonds, and she fingered the fabric of the dress wistfully. It would have to go back to its owner at the end of the night, though this was one she wished she could keep after the job was done. She’d polished her white scales to a shine and applied a hast gloss of oil to the grey running down from the underside of her jaw, at the point of her neck, to disappear into the plunging neckline of her attire. Her scales gleamed with good health and, although it was a bit striking for a party of the upper class, her blue hair was combed back in its usual Mohawk, slinking down the back of her neck in a light mane.

Chris narrowed her eyes, letting a sigh roll off her shoulders as her gaze shifted from fur to fur, observing their delight in the evening without participating herself. She was not there for pleasure. She had taken the bare minimum amount of time required to garb herself for the evening, paying more attention to the firearm strapped to her inner thigh, close to the joint. It sat there, a cooling weight, where it would not show through the dress, in prime condition. Chris’ lips twisted. It was not where she would have preferred to keep the pistol but it would have to do. It would be ridiculous to have a handgun strapped to her belt at such a high class affair and would cause more problems than it solved.

Still, she missed its comfort, a paw’s breadth away in a crisis.

Chris brought a flute to her lips and tipped it up, though she did not drink, simple falsifying the motion to convince the guests that, yes, she was indeed one of them. But the dragon had more important matters on her mind than socialising, eyes darting around the expansive reception with a business-like focus. How could they take in the world without truly feeling or experiencing it in their hearts? Everything she had experienced of the upper class world since being hired as the bodyguard for politician Michael Harris disillusioned her further and further from the notion of money sealing in happiness. She could not speak of his policies; her contract didn’t allow it anyway.

She sighed for a second time. Theirs was another world entirely.

Michael Harris caught her eye from a few metres away and beamed. She had taken a step back to absorb his surroundings and check for threats that were perhaps not in the immediate vicinity. The dragoness lifted her paw in a gentle wave, fingers flicking and dropping back to her side. To stay away from his side for longer would give her more peace of mind as he was surrounded by companions but, alas, the job demanded her presence at the side of the wolverine for the majority of the time. There was no one of note attending the party, regardless, and she dipped her muzzle as she walked to rejoin the group, taking shorter strides than normal due to her high heels.

She wrinkled her muzzle, hiding her expression behind a polite smile. That was not her name. Her name was Chris. Apparently that was not ‘fancy’ enough for Mr Harris with potential supporters peering at her over the rims of their glasses. She heard the name of Mr Harris’ companion without taking in the information and she blinked as the shorter otter with oiled brown fur held out his paw to her, his smile not reaching his eyes. The group judged silently as she extended her paw to the otter to shake, grip perfectly firm and simultaneously light as befitted a lady in such company. Her true handshake would have crushed bones.

There was not much to be done for the company and the dragoness laughed and smiled as politely as she was bale without losing focus on her job of the evening: keeping Mr Harris safe. He could parade her around like a butterfly on his paw all he liked as long as she had the time and space to watch him and survey their surroundings for threats. It was unlikely that anyone other than a rogue drunk – perhaps when returning to his car? – would cause trouble but, having worked with many other high profile clients with a great deal more to lose, Chris could not be too careful.

She was forced to sip from her champagne when the group noticed that the level was yet to deplete and did so grudgingly, long tail curling against her legs beneath the dress. Didn’t they realise she was there to work and no more than that? She could have had a nice time if she was at a party with friends, something entirely different, but slow dancing, vapid conversation and chords of Mozart was not something she would have chosen to do on a Saturday night.

The party had a deadline, however, and Chris breathed at long last when she stepped into the cool night air, waving off Mr Harris’ company with a less polite paw, professional mask slipping for the briefest of instances. She didn’t know a single one of their names still.

“Splendid night,” Mr Harris said, sitting in the back of the car with Chris on the opposite side, a seat between them. “I am more than confident that they will lend their support to my campaign, taking me to the next tier. Certain, in fact!”

“I hope everything goes as planned for you,” Chris replied, not entirely sure of what she was hoping.

Mainly she was hoping for a hot shower that night and anticipating such, mind wandering as the car purred into life, gliding down the road as if it was floating, so quiet was the engine. The dragoness chuckled to herself. She preferred something with a little more bite.

In no time at all, they started back to life in the back seat as the car slowed outside Michael’s home, one light on in the front room window, set behind the finely groomed garden. There was not much of it to see in the dark but the open, spacious style of the interior with no expense spared was the type of home that Chris imagined living in one day.

The wolverine fumbled a goodbye, words slurred, and hopped out of the car without as much as a ‘thank you’ to his driver, stumbling on to the pavement. Too many drinks at such an event made Chris wonder what promises he had made. Yet that was not her concern to bear and she put it from her mind as she relaxed back into the seat, tension easing from the centre of her back at long last. It had been a long night.

Michael popped his head back into the car, whiskers twitching about his sharp muzzle. The dragoness tilted her head expectantly: yes?

“I won’t be needing your services tomorrow,” he said. “The dinner’s been cancelled. Take the day off.” He smiled generously. “You’ve earned it.”

Great. Chris flinched. That was another day of work gone out the window. Did the idiot not realise that that was a day she could have spent working for another client? And now it was lost. She couldn’t have dinner with her family like he could, not so easily.

“Of course,” she said smoothly, recovering in the blink of an eye. “I will see you on Monday.”

Watching Michael walk away through the tinted windows, Chris’ paw curled into a fist, claws digging pricks of pain into her palm. Arsehole. The canine in the driver’s seat turned to look back at her, eyes warmer than any she had seen that night.

“That would be divine,” she said, rolling her shoulders. “It’s been one heck of a night, Jack.”

The Golden Retriever driver chuckled, pulling away from the curb. He knew the route to the dragoness’ home almost better than she did but, as per instruction, he was careful to take a zigzag route, intended to trip up any followers. Frankly, Chris felt Mr Harris was being overly cautious but it mattered little to her as long as his deposits went through in a timely manner.

She waved to Jack as he left her on her doorstep, the canine picking up a higher speed now that she was no longer in the car. Chris shook her head. That dog was not one to look after his own safety, though she probably worried too much. He was an excellent driver, after all, and home called.

Her Aston Martin sat in the wide driveway, pristine, and she blew it a kiss, fluttering her fingers at the sleek hood as if flirting with a lover. Chris laughed aloud at her own fun, breath frosting before her muzzle in the glow of the street lamps.

Maybe that day off wouldn’t be so bad, after all, if she could take her boy for a spin.

This has been sitting in my To-Do list for quite a long time, and at last, I finally got to work on it and finish it. Now to work on part 2.
Or you can find the full story here! And it gets hot and intense pretty fast~ -> http://www.furaffinity.net/view/20449101/