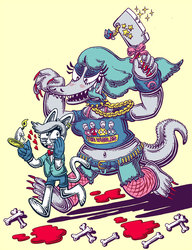 Man I am obsessed with Magic again atm. Can't stop thinking about em CARDS. This new set is pretty good too. Been having fun at drafts.