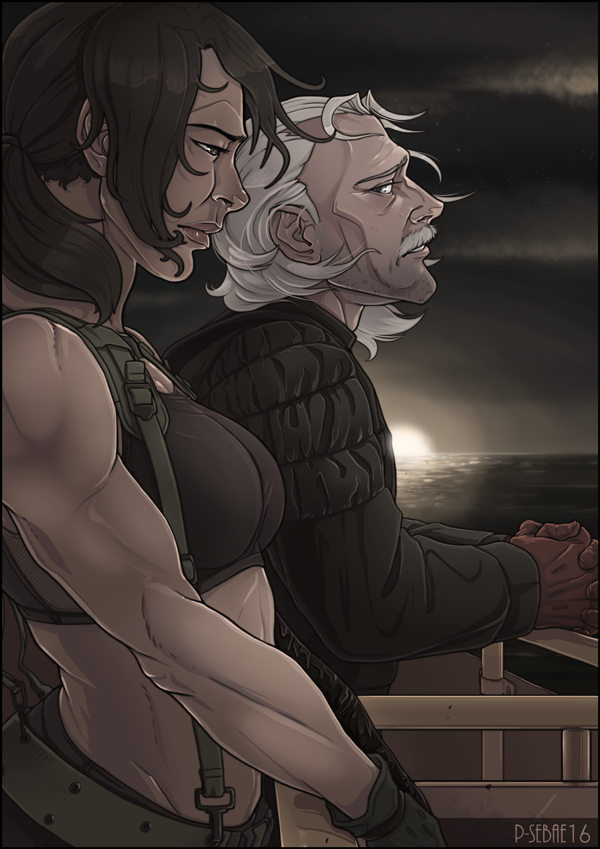 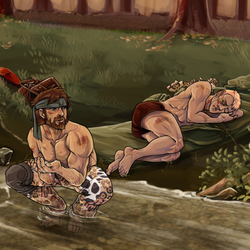 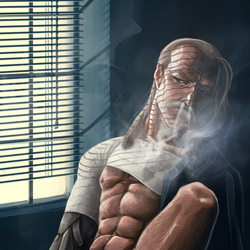 Well, they weren’t enemies at least. If there was one aspect of his and Quiet’s relationship he could be sure of, it was that.
She had just returned from a mission, she had immediately sought him out. He hadn’t been surprised, a small, fond smile the only expression lining his tired face as she appeared next to him, looking as though the night sky was combining with the wind and cool, rising sea spray to melt into the sniper at his side. Their eyes met briefly and his smile faded.
She couldn’t leave. She could barely stay, what with the reactions of the rest of the base, with Kaz riling up the soldiers into distrust, fear towards her; a fear that had already been present since her arrival. Venom… she was distracting Venom, doing as he asked for herself, saving her place on the base, because if Big Boss wanted her there, who would really be able to insist otherwise? But they both knew she was also doing it because Ocelot asked her to – well, ordered really.

Proving her worth on the battlefield was enough for Venom, but as for Ocelot… at first it had been a trade. Ocelot had offered to keep her in relatively comfy lodgings for a prison cell, with the stipulations that Quiet would distract Snake when needed. They were a relationship of convenience, of work, accomplices where only Ocelot knew what they were working towards. And maybe it would have been easier if it had stayed that way.

Were they friends? Probably not… but they were closer to each other than to anyone else on base, and that was friendly enough. In another situation, another life, then maybe…?
He started to say something, but decided against it, returning his gaze once again to the churning ocean, the endless horizon stretching to space, as murky and unknown as the thoughts in Quiet’s mind.
They heard footsteps, much too soon, before Ocelot could collect his thoughts and his companion dissipated into the night, stealing away back to her cell. The intruding soldier saluted him, before moving on, and Ocelot stood there until morning, watching the waves, waiting, hoping she would come back.